Late summer rattlesnakes in the Muskokas

A few weekends back, several of my closest friends and I spent three nights up at Dan Riley's family cottage, located on the west shore of Lake Simcoe. It was a bachelor weekend of sorts for us, but instead of strippers and casinos, we had hiking and rattlesnake-ing on the agenda.

During two of our days at the cottage several of us decided we would go for a drive to check out a favourite herping spot, a location where among ten species of snakes, Eastern Massasaugas are regularly encountered. Todd Hagedorn, Dan Riley, my brother Isaac and I composed the intrepid herping crew on both days. I was really hoping that we would luck into finding a few Eastern Massasaugas - not only because it is my favorite species of reptile in Ontario but because it would be a first for my brother, who was my original herping buddy during our formative years.

We could not have asked for better weather conditions for both days. While the afternoons were warm, the heat was far from oppressive, and a light breeze whisked away any perspiration quickly and efficiently. Due to the time of year the majority of the biting insects were nowhere to be found, exponentially increasing our collective levels of comfort.

Birds were eerily silent out in the rock barrens. Since the breeding season is essentially finished, most species were staying quiet (no need to draw undue attention), while other species were absent, having already departed for warmer climes further south. But we were not here to look for birds - the snakes were the object of our searching and we were not disappointed with our haul.

I was fortunate to spot a couple of Smooth Greensnakes out and about during our first day as we herped a familiar location, a place where I have visited on at least 20 occasions. Smooth Greensnakes are a common but inconspicuous species found in this part of Ontario; when crossing an open rock barren they are much easier to spot!

Since I did not have my camera and lens with me on Day 1 I did not focus on photographing the smaller snakes as much, though I took a couple of quick snaps with my phone. Nothern Ring-necked Snakes are probably the most abundant species of snake in this habitat (open rock barrens, oak/maple woodland, and scattered wetlands).


Within an hour of our arrival on Day 1 we hit the jackpot. A yell from Dan got the attention of Isaac, Todd and I. Dan had discovered a "nest" of baby Eastern Massasaugas, all coiled up, under the edge of a massive rock that was propped up, creating a large cavity underneath. This turned out to be one of two "nests" we would find on the day, totaling 14 rattlesnakes! This photo below is of the second nest which Todd first spotted. My picture is of fairly poor quality (the iPhone doesn't handle contrast-y scenes too well), but hopefully you can make out a couple of the baby rattlesnakes tucked in against the rock.


We were ecstatic with our finds and soaked up the views of the baby rattlesnakes. Like all rattlesnakes Eastern Massasaugas are ovoviviparous; meaning that they give birth to live young, though the developing young are fed by egg yolk (vs being fed through the placenta, as what happens in humans and other viviparous species). The young rattlesnakes often remain in the same birthing area, sometimes with the mother nearby, for a period of several weeks before dispersing throughout the surrounding landscape. I can count on one hand the number of Eastern Massasauga nests I have stumbled across; it's always cause for celebration!

Below is a photo of a neonate Eastern Massasauga that I took several years ago. This photo illustrates not only the neonate's excellent camouflage on the open bedrock, but also the single "button" it possesses, compared to the multi-segmented rattle that older snakes have. I have to admit, these snakes are as cute as a button! 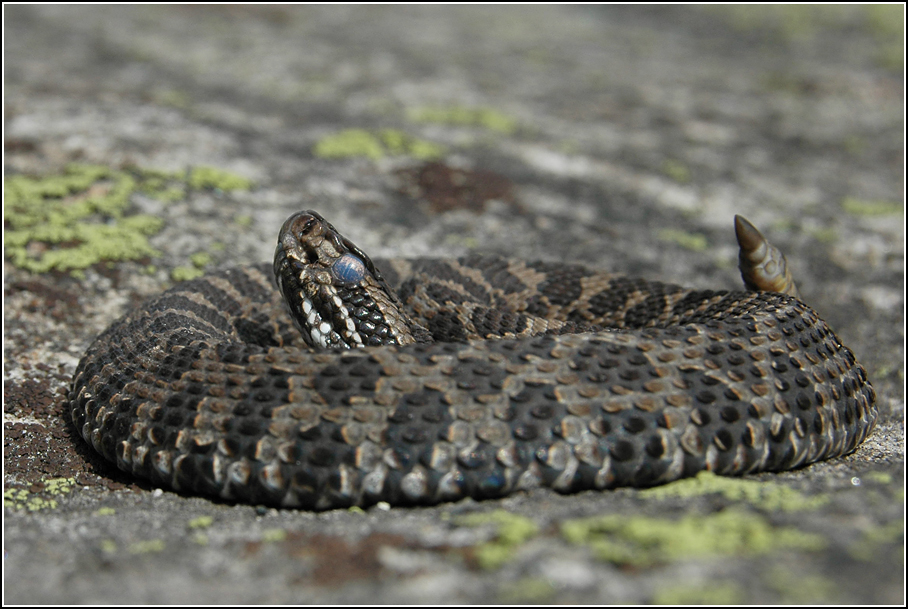 Towards the end of our hike on Day 1 I spotted this gorgeous Eastern Massasauga in a rock pile where I have seen them in the past. Dan and I were both kicking ourselves for having left our cameras behind, forcing us to resort to our phones for photographs.


On our second day, Todd, Isaac, Dan and I decided to check out a new area, something that I don't do as much as I should. In the past when I was much more involved in the herping "scene" I would frequently widen my search radius to explore new areas; nowadays, I tend to return to the same tried and true locations that I have been visiting for years. Our gamble paid off handsomely this time as we found quite a variety of reptiles and amphibians; I believe we totaled seven snake species on Day 2, giving us eight species for the weekend. I even remembered to bring my camera this time, giving me a chance to test out the new D7500 and 300 mm lens. 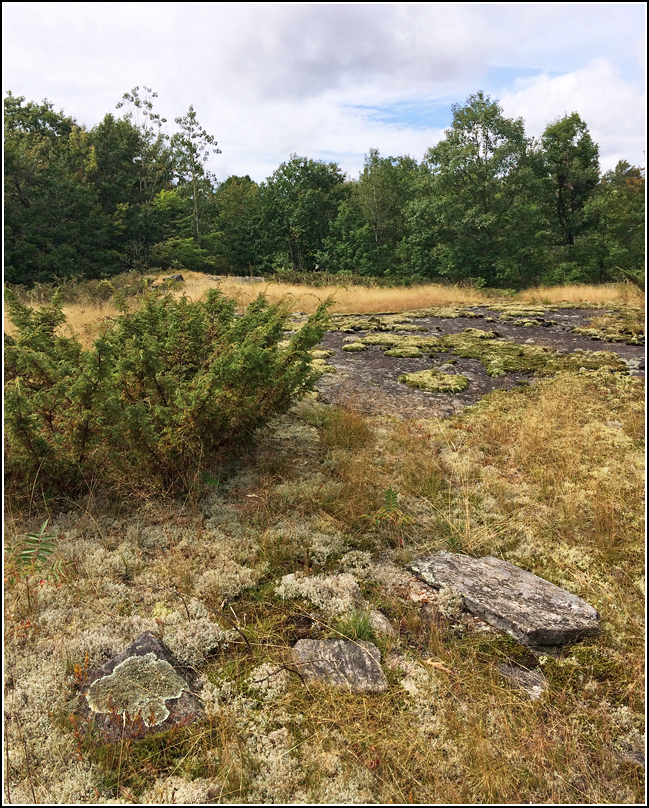 Dekay's Brownsnake is well known to most naturalist-types in southern Ontario, in part due to the species' ubiquity, but here on the barrens they are much more difficult to come across. I certainly see more Eastern Massasaugas than I do Dekay's Brownsnakes up here, for some reason! This individual was the only one of the weekend; it was found under a rock in some barrens that look very similar to the above photo.


We came across this interesting scene as we hiked along. The wet summer that we have been experiencing likely contributed to high water levels which presumably burst through a beaver dam, almost completely draining this wetland. The water level had diminished by well over a meter. Needless to say there is a beaver out there that has had its engineering degree revoked. 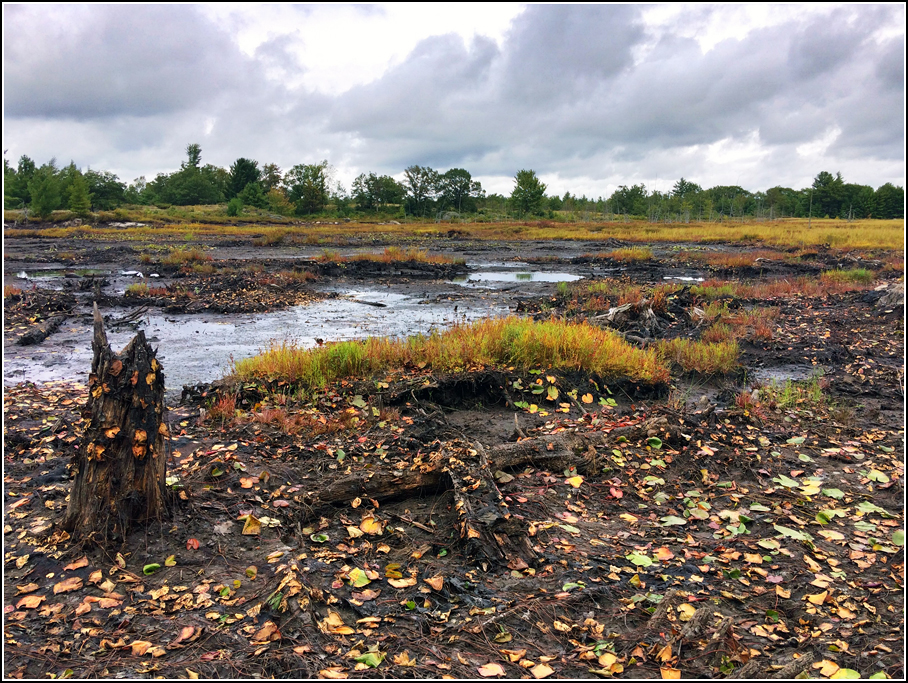 I don't usually see shorebirds when in Muskoka District (apart from occasional individuals at the Bracebridge sewage lagoons), but we were happy to see that several shorebirds were making use of the recently exposed mud caused by the draining of the wetland. Among those present were Solitary Sandpiper, Greater Yellowlegs and Semipalmated Plover.


For much of our hike on the second day we explored the periphery of a large wetland complex; as a result we encountered numerous Northern Watersnakes and Northern Ribbonsnakes moving through the sedge meadows surrounding the wetland, or basking higher up on the lichen-encrusted bedrock that circled the wetland.

Snakes are not the only reptiles that frequent the barrens; Ontario's only lizard species can also be found, if one knows where to look. This little gaffer is a young Five-lined Skink, as told by its bright turquoise tail. As they age they lose the blue colouration while the stripes will fade as well.


Dan made a great spot with this adult Eastern Massasauga, representing the highlight of the day (for me, at least!). While every encounter with this species is worth remembering, this one was made extra special because the snake was found in a new location for us.

Our last snake of the day was a little Red-bellied that Todd found alongside the trail. There are two common colour morphs of this species that we see in Ontario - this individual was of the gray morph, which is my favourite of the two morphs, while they also come in brown. Both morphs show the striking red ventrum. 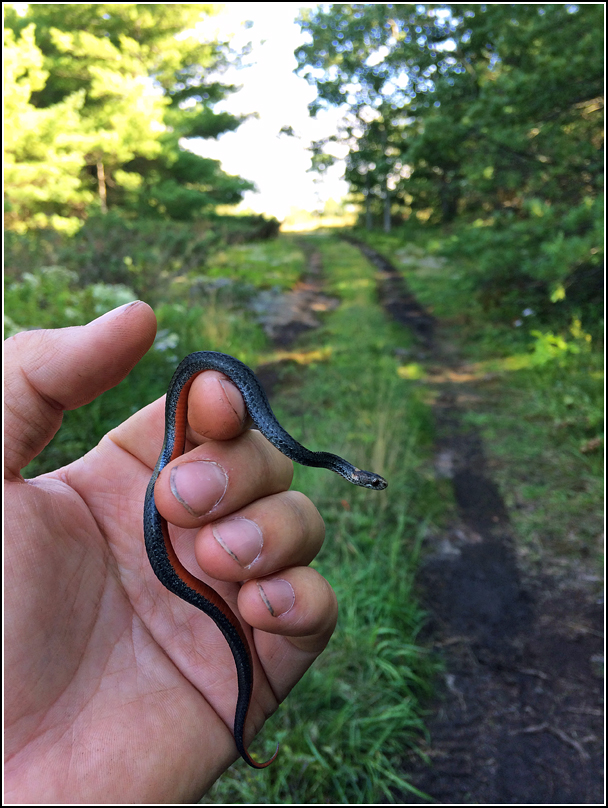 It was a great weekend with the guys, in one of my favorite parts of Ontario. I'm already looking forward to visiting again; unfortunately it won't be until next spring.
Posted by Josh Vandermeulen at 17:54 No comments: