I haven't been out in the field for much of anything lately, other than work. With the hot weather we have been getting, the Butler's Gartersnakes that I have been tracking have been moving much greater distances than usual!


Yesterday, I found a little snapping turtle running as fast as a turtle can run in the middle of an open field, heading towards a drain. This drain dried out last year, save for one small corner in which a Painted Turtle and 2 snapping turtles hung out. I am guessing that this little guy is one of the ones from last year!


The usual breeders are all settled in on my study site. It is pretty hard to go anywhere where there is a woodlot without hearing the trill of a Red-bellied Woodpecker or the repeated phrases of Indigo Buntings. I had my first Alder Flycatcher for the study site yesterday (presumably a migrant) and finally got Black-billed Cuckoo for the year as I had one calling.  Other than that, there is not much singing in this heat! Gone are the days where I could see/hear 75 species on the study site alone in the day. Now it is the same 30-40 species every day.

In February I went on an all out epic bird-fueled adventure with 3 buddies to California, Arizona, and New Mexico. I'll start posting day by day recaps soon!
Posted by Anonymous at 23:59 No comments:

One last run at Pelee

Overnight those of us in southwest Ontario were hit pretty hard with thunderstorms. In some areas up to 80 mm of rain fell, so as expected I was hoping that some rarities had shown up somewhere. But also, as expected, I did not locate these rarities.

Driving towards the park, the amount of rain that fell was immediately obvious as most of the fields were flooded. The gulls were making use of this, but I could not find anything of interest with them.

Pelee was very slow, especially at the tip. It was really good to do some birding with Sarah for a bit as well as run into a few old friends at the park. Highlights (they were few and far between!) include:
11 species of warbler including Black-throated Green (late), Canada (heard only) and Cape May
White-rumped Sandpiper in the Onion fields

It seems that Ottawa was the place to be today (Arctic Terns, Purple Sandpiper, Franklin's Gull, etc). Check out Bruce's post:
http://ontbirds.ca/pipermail/birdalert_ontbirds.ca/Week-of-Mon-20110523/027621.html
Posted by Anonymous at 23:15 No comments:

I was on the road by 5:30, and by 6:15 I arrived at the Hillman marsh parking lot. The birding here was good as usual - almost immediately I picked out a Western Sandpiper among the semis and leasts. Nice! There was also a White-rumped Sandpiper present, but it was difficult to study the birds because they kept flushing and flying around for a few minutes. At around 6:35, all but a few Black-bellied Plovers left. On to Pelee.

I was hoping for a bit of a Whimbrel flight but alas that was not to be. I met with with Sarah Rupert and we did a bit of a tip watch. A single Whimbrel flew in, circled, and left about 4 times. At least one of those times it touched down on the beach not far from us for a few brief moments! Sarah had a Red Knot fly by that I just caught a glimpse of, and that was about it for shorebirds.
A bit of a reverse migration was happening in the morning. Nothing unusual, but an Acadian Flycatcher perched on the very last bush on the peninsula, before flying out over the lake. Also, at least 4 Red-headed Woodpeckers and many Chimney Swifts.

Walking back to the tram stop, there were still a few good Passerines around. Many MANY Blackpolls, a Canada, and about 8 other species of warblers. I finally picked up alder flycatcher for the year too.

Laura had to get up early for work today so my plan was to wake up with her and head to the Blenheim/Erieau to do a bit of birding. Well, that plan obviously failed as I am sitting in my bed after just waking up....
Posted by Anonymous at 10:42 No comments:

I'm not starting work till about noon tomorrow, so its off to Pelee for the morning. The winds don't look great but I'm hoping to spend a few hours at the tip and maybe get some shorebirds flying by. High time for whimbrels, a species I still haven't seen in Essex County.
Posted by Anonymous at 17:31 No comments:

Salamanders in the spring

This past April I headed over to a favorite local spot of mine in search of salamanders and other amphibians. I have been visiting this location for years and have seen about 25 species of herps here, so its always a pleasure to visit and see what is around.

Spring was late in arriving this year, but after carefully checking the weather for a few weeks, everything seemed to line up and I made my way out there.

On April 4th, I visited the spot with some friends from school - Patrick, Chris, Kathryn, and my girlfriend Laura. We picked a perfect night and it did not take Patrick long to find the first Jefferson's salamander. 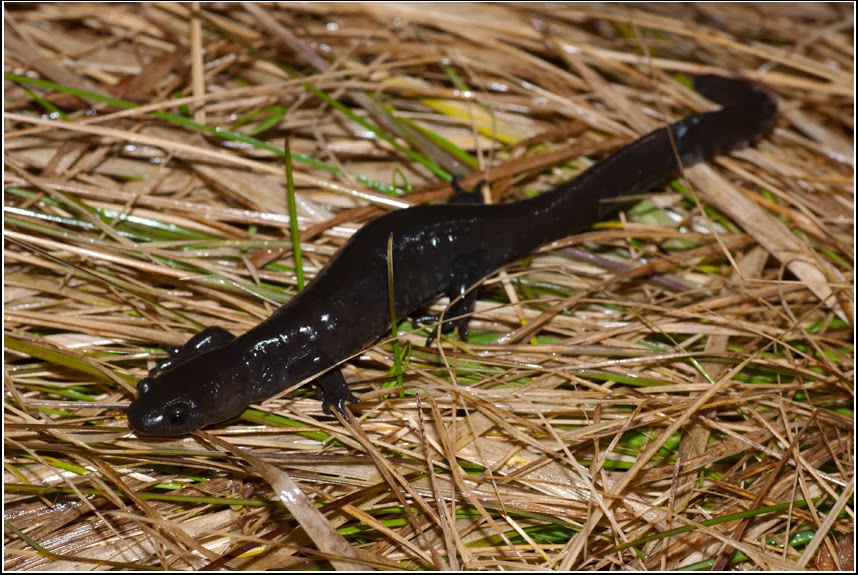 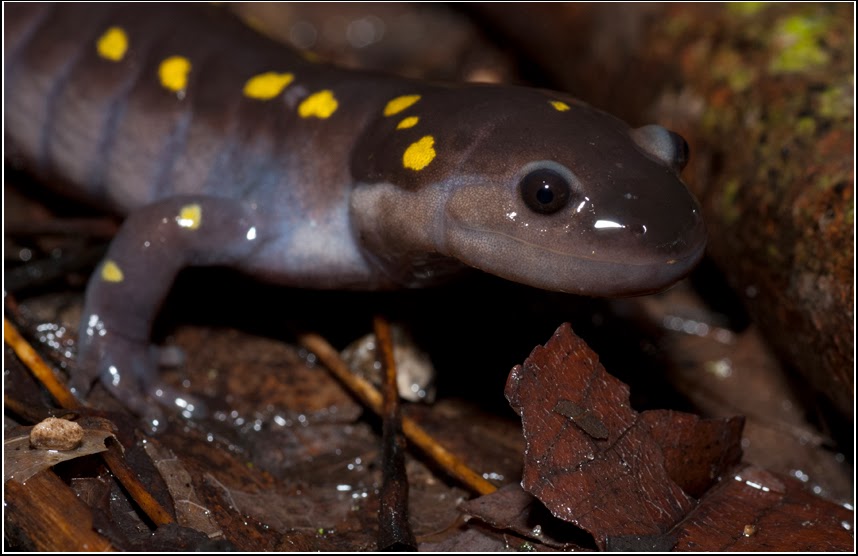 Surprisingly, few frogs were heard calling from the vernal ponds and sloughs. However, a single spring peeper (Pseudacris crucifer) was located. Here's a shot of Patrick the Red and Laura with a Jefferson salamander.

A few nights later I returned with a some other friends from the university. The night was warmer and the rain had subsided just before the five of us arrived at the spot. Driving up the dirt road, I thought I caught a glimpse of a Sandhill Crane, so I pulled over and we all had decent scope views of a pair. 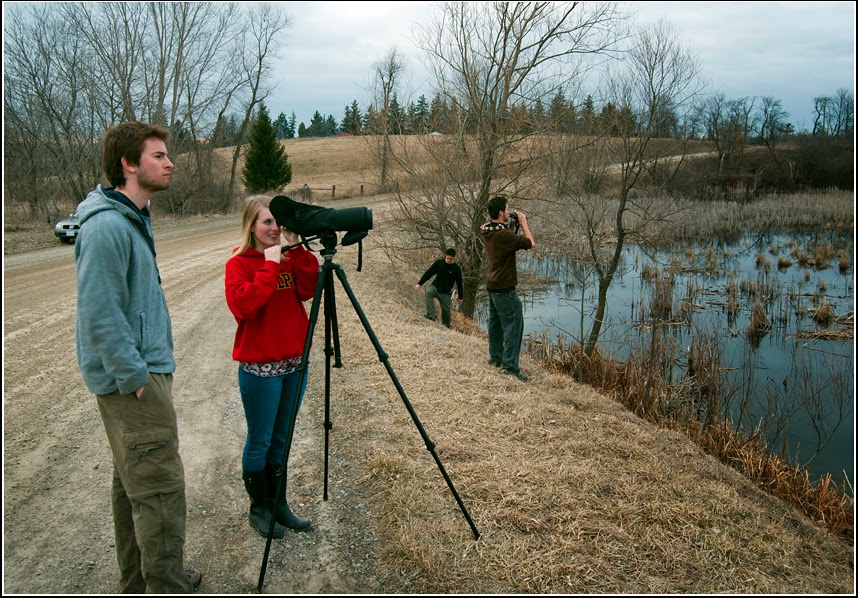 Among the highlights that night were 6 species of salamanders and 2 northern ribbonsnakes.

One particular spot seemed perfect for Screech Owls. I briefly played the call on my phone and within seconds 2 Eastern Screech-owls were watching us from the side of the trail.


The following two nights were more of the same. Arrive at the site at 6 or 7 PM, hike around with hip-waders and headlamps till midnight, and finally drive back to Guelph, exhausted.


Western Chorus frogs are tiny but produce a huge chorus. Unlike their relatives the spring peepers, chorus frogs are doing poorly in Ontario, with rapid population declines in recent years. Fortunately this population is still going strong.


Jefferson Salamanders and Blue-spotted Salamanders can hybridize to produce triploid, tetraploid, and even pentaploid unisexual salamanders. These hybrids are female and rely on the sperm from males of either species to stimulate egg development, though the sperm does not contribute genetic material. Some populations are made up primarily of hybrids, making it quite difficult to locate "pure" males of either species. Here is a shot I took on April 10th of pure male Jefferson and blue-spotted salamanders. Note the larger size of the Jefferson along with longer limbs, snout, and a paler body colour with small blue flecks instead of large blue blotches.


Within a few days of locating the first wood frogs, I returned and noticed many wood frog egg masses completely covering the surface of some vernal ponds.


Not a bad few weeks at the ponds. Can't wait til next spring!!!!
Posted by Anonymous at 17:09 No comments:

Some highlights from Windsor

While I haven't made it to Pelee nearly enough this spring, not all is lost. Because I am working in the Ojibway area of Windsor, decent numbers of migrants can be found easily, even when I am "working". Some highlights so far:

Northern Goshawk: I spotted a juvie bird circling on a hot sunny day. Russ Jones had it the next day chase a green heron out of a woodlot!

Common Raven: Regular back home, but very uncommon in Essex County. Yesterday, one flew over my study site calling while being harassed by crows.

Acadian Flycatcher: One was present for a few days in the Spring-garden area. I found it on May 10 and it was seen that evening by Jon Pleizier, Shane Butnari, and Russ Jones. Seen on the 11th as well.

Kentucky Warbler: On May 11, I was present in a field while a group of planters where relocating native tallgrass species. I saw a few warblers in some nearby poplars. A bit of pishing produced a gorgeous Kentucky warbler, which approached to within 10 feet of me.

Connecticut Warbler: One male heard and seen at close range in the Spring-garden area.

And of course, Eastern Foxsnakes:

Posted by Anonymous at 18:55 No comments:

I finally had a chance to head over to Pelee for the first time in a few weeks. So far I had missed out on a number of interesting birds that had been seen there recently, such as Bell's Vireo, Swainson's Hawk, Fish Crow, 37 species of warblers, etc.

Checked out DeLaurier for a change first thing in the morning. This was probably by best location all day. No real highlights, but I did see/hear about 15 species of warblers.

I headed down the West Beach footpath towards the tip. This has always been my favorite trail at Pelee - fewer birders, a clean view of the sky, and always a chance for rarities. A few of my better Pelee finds last year (Henslow's Sparrow and Kirtland's Warbler) came from here.  On Thursday, a Dickcissel flew over me along this path as well.
Today was really slow, though a few singing Mourning Warblers were nice.

At the tip I ran into Brandon Holden and Ken Burrell who had just returned from a month of birding on Pelee Island. Ken and Brandon had a probable female Western Tanager reverse-migrate not long before I arrived. While walking near the tip with them, Ken's sharp ears picked out the distinctive song of a Prothonotary warbler.  I took a look at the "Yellow-legged" gull at the tip as well. I'm not convinced that's what it is!

Hillman Marsh wasn't bad later that evening and I did see a couple of White-rumped Sandpipers which were new for the year. Apparently others had seen Baird's (REALLY good spring record) and Western Sandpipers there that evening as well. Finished the day with about 120 species.
Posted by Anonymous at 18:44 No comments:

So after holding out for quite some time, I've finally jumped in and started a blog. As it's title suggests the main theme of this blog will be the herps and birds that are found in Ontario. Over the past few years I have spent a lot of days out in the field searching for herps and as a result I have photographed the majority of the species in Ontario, such as this Eastern Massasauga. 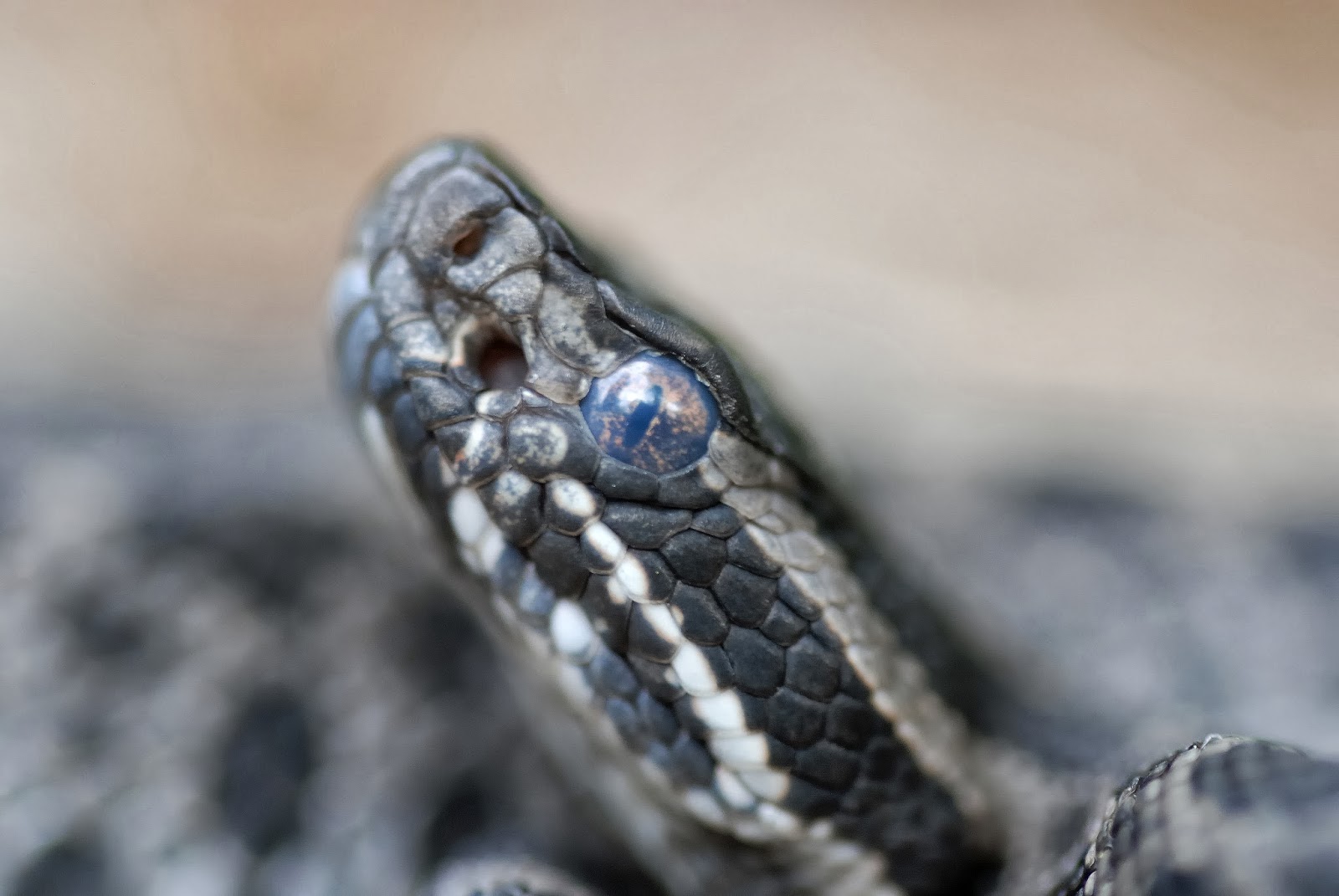 Birding came naturally around 4 years ago, and so this has taken up much of my time recently as well. I'm relatively new at the game but I have seen a few interesting species so far. The search for vagrant birds is certainly enticing for me, and I hope to come across some in the near future.

I am currently based out of Windsor, Ontario where I am working for a consulting company. Highway 401 is being extended through the city of Windsor and a new bridge will be built in the near future. My job includes studying two species of Endangered snakes in the area - the Eastern Foxsnake and Butler's Gartersnake (see photo below) so that mitigation efforts will be as successful as possible. 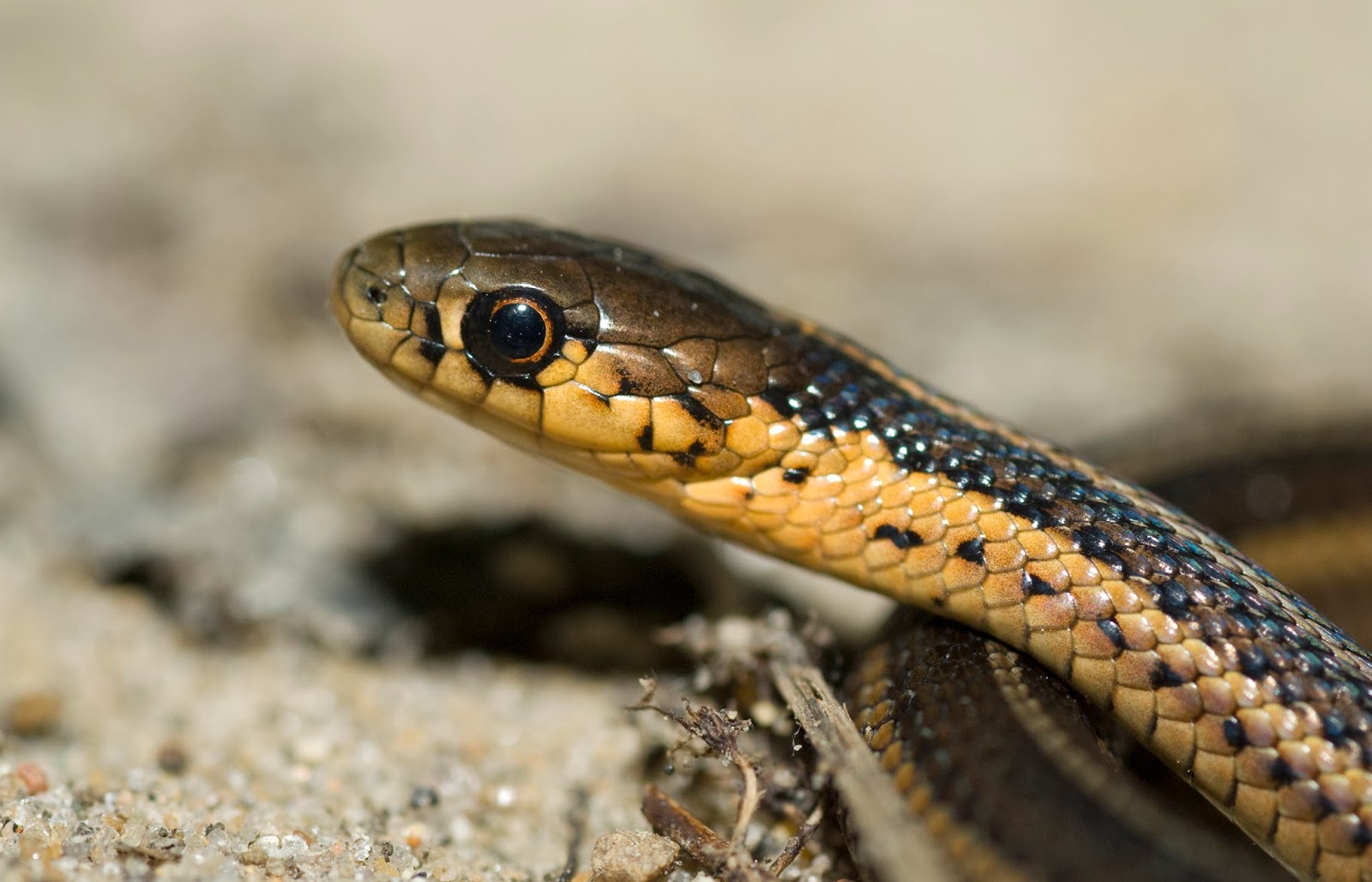 Posted by Anonymous at 18:34 No comments: