To read Part 2, click here.
A few weeks ago, friend and fellow birder Tyler Hoar invited David Szmyr and I on a trip to the boreal forest of Ontario to look for northern birds and to do some snowshoeing. He did not need to ask me twice as I really love the north. Sure the north is cold this time of year and birds are few and far between, but who can turn down an opportunity to snow-shoe in the boreal forest, away from cars, pollution, and people?

Our plan was to spend all day Saturday birding our way up to Timmins, including stops in North Bay, Temagami, Temiskaming Shores, and anywhere else that looked decent.

My alarm went off at 2:30 AM and I actually did not even feel tired. Perhaps my body thought it was just a nap since I had fallen asleep only a couple of hours previously. At any rate, my gear was packed and Tyler soon showed up at my front door. After a quick rendez-vous to scoop Dave from his place in Barrie we were on our way to the North Bay area.

Our first target of the day was a Northern Hawk Owl which had been staking out a farm where it presumably had been feeding on a steady supply of rodents attracted to the barn. Dave had never seen one before, and any moment with a Northern Hawk Owl is an awesome experience. We drove up and down the road without seeing it (though a couple of Ruffed Grouse were on the road and in the surrounding woodland), but on our second pass through the area a Common Raven was spotted dive-bombing something. The obvious shape of the owl stood out with the naked eye at quite a distance even in the dim pre-dawn light. Success!


Northern Hawk Owls always seem to pick the most conspicuous perch at the very top of a tree, from which they can survey the fields below. It looked at us on occasion but its gaze (or rather its hearing) was, more often than not, focused on some unseen rodents below.


Northern Hawk Owls are a personal favorite of mine; a species that is always high on the target lists of visiting birders to Ontario. While seldom seen south of the boreal forest, at least a couple are observed every winter in the North Bay to Peterborough to Ottawa areas. I do not think that I could ever tire of this awesome species! One of my personal birding goals is to find a Northern Hawk Owl on territory, maybe with a nest and young, in the boreal forest during the summer.


Spurred on with our success, we checked a few bird feeders in the vicinity (seeing our first two finch species of the day - Purple Finch and American Goldfinch) before continuing our drive north.

Arriving in Temagami we took a short detour off the highway to check some areas containing both Eastern White and Red Pines. This area is a stronghold for Red Crossbills in Ontario. While driving through the town a pair of Gray Jays casually flopped on by to the backyard of a house - another lifer for Dave! We were giving him a lot of grief throughout the trip over the fact that he had been to Algonquin several times, had even added Boreal Chickadee to his life list, but had never seen a Gray Jay!

Temagami was a bit of a goldmine and in short order we added Pine Siskin to our finch list. Lifer #3 on the day for Dave was a gorgeous male Red Crossbill that I watched fly in and perch, fully sunlit, on the tip of a branch.

We made several stops throughout Timiskaming District, including in the towns of Cobalt, Haileybury, New Liskeard, and some backroads in Dymond Township. One surprise was a flyby Pileated Woodpecker in "downtown" Cobalt. It was the first time that I can recall seeing a downtown Pileated, though Cobalt hardly counts as a town containing a down. We also marveled at the extensive cone crops and Mountain Ash berries in the town, yet not a single waxwing or grosbeak was making use of them! I guess there must be enough to eat in the woods.

From here, we headed west along Highway 560, through Elk Lake and towards Gowganda. At one point we noticed some birds fly off the road a ways ahead of the car, and I commented that they seemed redpoll shaped. Of course, nary a single redpoll has been seen in the south all winter. We exited the car and immediately heard the distinctive chatter of redpolls! Certainly the biggest surprise of the trip was the frosty male Hoary Redpoll that accompanied the group. This was the first Hoary Redpoll to be reported in Ontario all winter!


The Common Redpoll was finch #5, and the Hoary, #6. The Hoary was also another lifer for Dave, his 4th on the day!

As you can see from the above photo, the weather was absolutely perfect. Calm, sunny, and only about -10, which is quite comfortable when there is not any wind!

We continued west, scaring up some Pine Grosbeaks off the road (finch #7), before turning north at Highway 144. After an hour of driving we began to see the beginnings of the Timmins 9 Fire. This was the largest forest fire of the 2012 season in central Ontario, burning 39,524 hectares of spruce forest. This was precisely why we were here. American Three-toed and Black-backed Woodpeckers are both somewhat nomadic species that often can be found in large numbers in recently burned areas. I will comment more on this behaviour in the next post.

From 3:30 PM onwards, we strapped on our shoeshoes and headed out into the burn through 3 feet of soft powder. It was absolutely gorgeous in the burn. 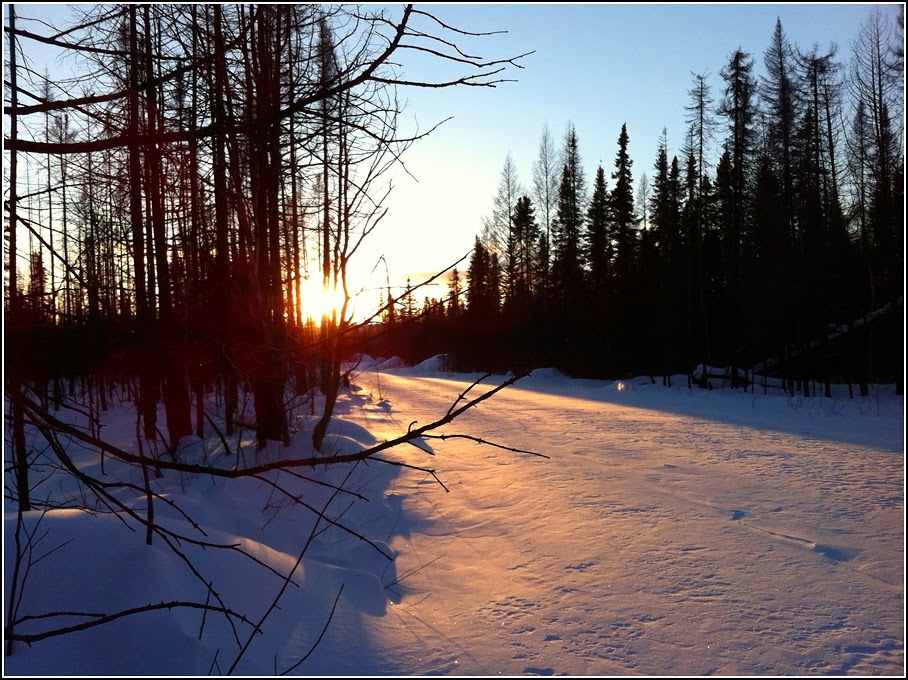 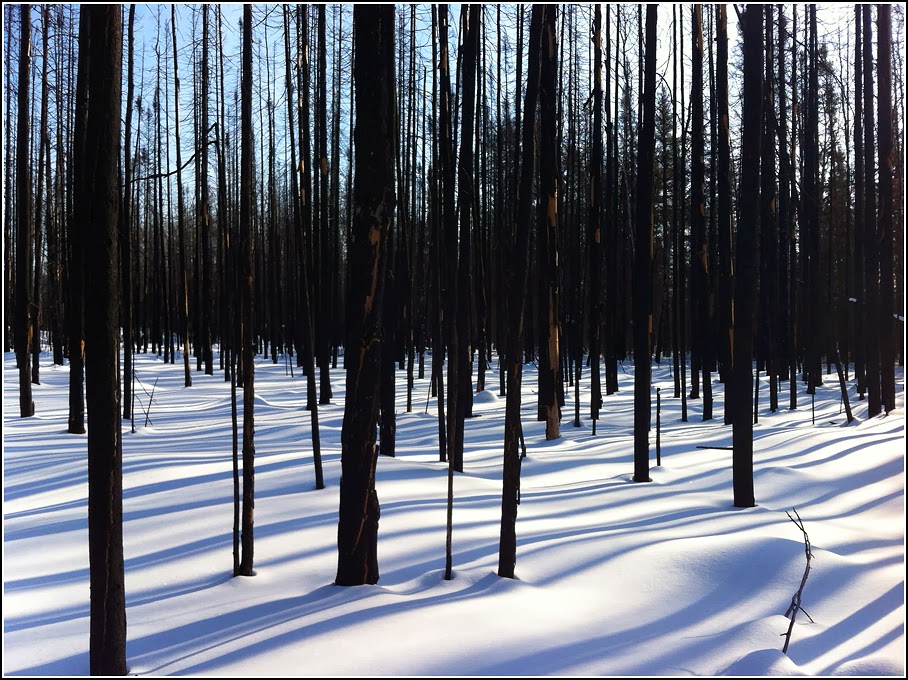 The woodpeckers were almost too easy. Almost immediately after arriving, I heard a Black-backed Woodpecker quietly tapping away in a grove containing several spruce. She ignored us as we approached closer for better looks. Evidently there were more important things in her life, like extracting beetles from beneath the bark, than worrying about the strange looking caribou making weird sounds nearby.


Tyler heard a distant American Three-toed Woodpecker and went south in pursuit. Dave and I continued west, finding several Black-backed Woodpeckers working the trees. I thought I heard a Three-toed and a brief few seconds of playback initiated the bird to come out of the woodwork and check us out. Both these species of woodpeckers were lifers for Dave, # 5 and #6. It had been a pretty spectacular day!

Here are a few photos of the 3 compadres...


As the sun slowly set we retreated back to the car. It had been a spectacular day to put it mildly! It is easy to get down and depressed in the middle of the winter, especially for someone who feels the need to connect with nature on a regular basis. I find the best way to cope is to go out and embrace winter. Snow-showing in pristine powder in the boreal forest, with the only sounds being the quiet rhythmic tapping of Black-backed Woodpeckers, certainly had been one of the highlights of the winter for me. 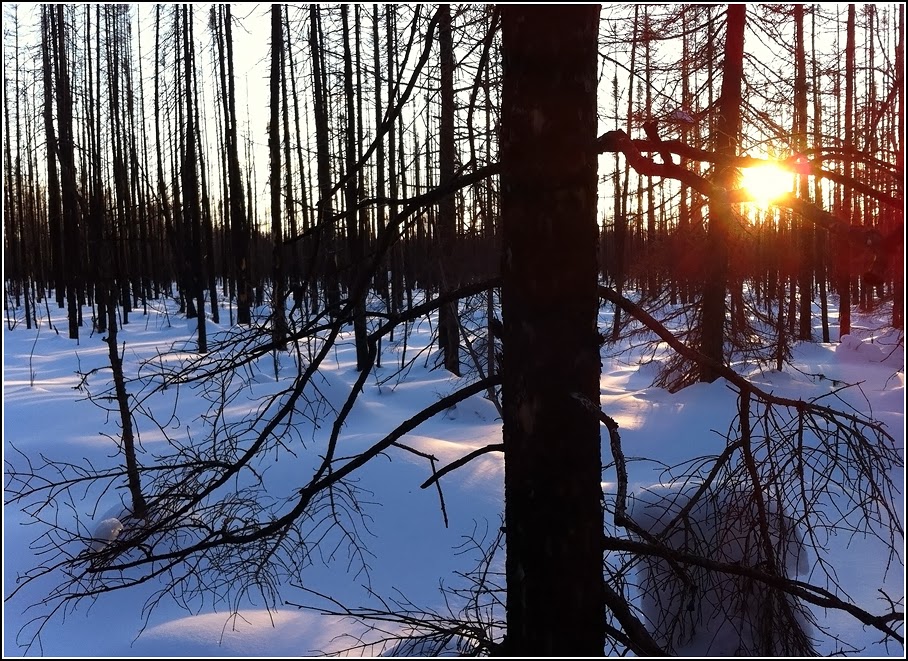 To read Part 2, click here.
Posted by Josh Vandermeulen at 22:42

I am definitely going to spend a couple of days in Timmins 9 once I can get a car/bike further into its heart.