On June 12 local Thunder Bay birder Chris Johnston observed an unusual looking swallow at the Thunder Bay marina. She deduced that the bird was a female Violet-green Swallow and posted her sighting to the NWObirds group, the message board for bird sightings in northwestern Ontario. The most unusual aspect of Chris' discovery was that the Violet-green Swallow appeared to be paired up with a male Tree Swallow. They were seen carrying nesting material into one of the nest boxes and the male would chase off other prospective suitors. While Violet-green Swallow and Tree Swallow look superficially similar, this hybrid combination is quite rare, and has only been documented a couple of times.

The Violet-green Swallow continued to be seen the following day and appeared to be getting comfortable so I decided to do something crazy - I would fly up to Thunder Bay to chase this bird. After all, Violet-green Swallow is a species that had only been observed four times previously in the province, with none of those birds particularly chase-able (though a lucky few were successful with the Ottawa bird in 2013). Opportunities to chase birds that would be new to my Ontario list are few and far between these days and Violet-green Swallow is definitely one worth trying for. I convinced Jeremy Bensette to come along with me and by 11:00 that evening we were on a flight to Thunder Bay, using some of my saved up aeroplan points. It just so happened that Glenn Stronks, a local Thunder Bay birder, was also on our flight as he was returning home after a few days of work in Toronto. Glenn kindly offered his place for us to stay for the night, and by 1:30 his wife, Joanne, had picked the three of us up and driven us back to their place.

The morning dawned windy and cold with a steel gray sky and the threat of rain. After an hour on site Glenn, Jeremy and I had not seen the Violet-green Swallow and an iota of worry began to creep into my brain. While we waited, this Beaver swam past us, not the least bit concerned with our presence. I guess this one is used to a lot of foot traffic.


At approximately 9:20 AM an "interesting" looking swallow materialized then quickly vanished into the nest box that we had staked out, followed closely by what appeared to be a male Tree Swallow. After a tense few seconds a swallow appeared at the entrance of the nest box - it was the Violet-green! We all instantly felt a wave of relief; at least I did!


The hour long wait was well worth it as the Violet-green Swallow continued to hang around the area for the next few hours. It would alternate between sitting in the nest box, perching on nearby poplars and a dead snag directly in front of the next box, and foraging over the nearby pool and surrounding fields.


We quickly clued into its routine and over time she became very easy to pick out in flight among the other swallows due to her smaller size and unique impression she gave off due to her white face and collar and extensive white along the sides of her rump. This is one of few flight photos of mine that turned out; unfortunately not showing any of the above mentioned features!


The male Tree Swallow kept a close eye on his exotic beauty, keeping watch especially when she was inside of the nest box, though they both took turns entering the nest box. We never did see either bird carry nesting material into the box but they certainly appeared to be paired up, with the male making several unsuccessful copulation attempts!

With nothing better to do (what could top a cooperative Violet-green Swallow?) Jeremy and I continued to bird around the pond, occasionally connecting with local birders who dropped in to take a look. It was great to run into Michael Butler who was in the area for field work, as well as Fred Jennings who I hadn't seen since January of 2012 back when he was hosting a Spotted Towhee at his house in Longlac. Chris Johnston, the finder of the Violet-green Swallow, soon arrived to check in on the rare visitor. Chris, along with her husband Jim, chauffeured Jeremy and I around for a few hours in the afternoon to visit a few local hospots. The generosity of people in northern Ontario always amazes me!

One of the more noticeable features, as I mentioned above, is the extensive white, which wraps around the sides of the rump so that the bird shows much more white from above. Violet-green Swallows also show much more white on the face including the area above the eye, while Tree Swallows have a striking blue head with while restricted to the lower half of the face. This feature is a little reduced on females but is a striking field mark on males.  Being a female, the Violet-green Swallow had a neat brown cap contrasting with the green of the upper back.

Violet-green Swallow quite clearly gets its name from the brilliant green and violet feathers that adorn its mantle and rump feathers. Even the females, normally the duller sex in the bird world, are strikingly beautiful. Even apart from its rarity in this part of the world this makes it a bird worthy of study.


During our stay both the male Tree Swallow and female Violet-green Swallow frequently entered the nest box, though nesting material was never observed being brought in. During a lull in the action when both birds were foraging over the pond we took a quick look inside of the nest box. While the bottom was covered with feathers a defined nest was not present, nor were any eggs. Birders visiting a few days later noted a possible predation event by a Red Squirrel. The rodent visited the nest box for a few minutes to the agitation of the two swallows, though it was apparently unclear whether it actually consumed any eggs. It will be interesting to see in the coming days if the Violet-green Swallow continues to frequent the area and if she attempts to nest.


Finally by early afternoon we tore ourselves away after a thoroughly enjoyable five hours with the bird. Chris Johnston and her husband Jim offered to drive us to Mission Island to see what birds and mammals we could scare up. Some of the deer on Mission Island are exceedingly tame, leading to easy photo ops. 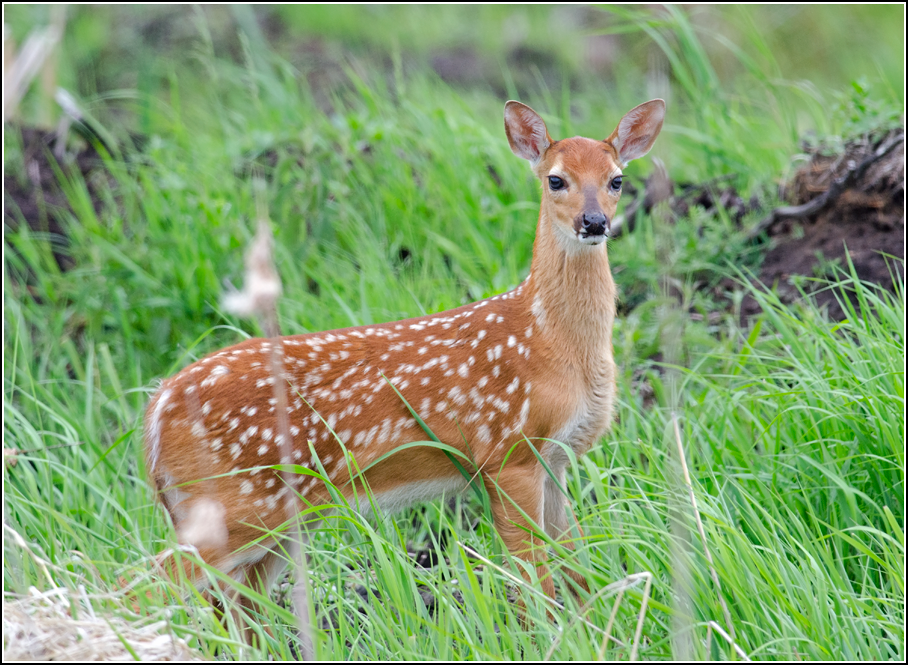 After an enjoyable few hours birding with Jim and Chris we made our way back to the airport as our flight back home beckoned. The trip may have only been just 26 hours in length but it will certainly go down as one of the highlights of the year. Thanks to Glenn and Joanne for their hospitality and to Chris for discovering the bird!
Posted by Josh Vandermeulen at 21:26

If she sticks around, I have plans to try for her in early July. Since it's relatively early, she might try nesting again. Since she's paired up, it seems a bit unlikely that she'll leave suddenly (unless she divorces her TRSW mate).