Located off the grid, the Borneo Nature Lodge generates their electricity from solar. A tower outfitted with solar panels had been built in the center of the lodge area, to maximize the solar radiation that it could acquire by reaching above the trees. This tower doubles as an excellent vantage point to watch for birds passing through the trees. As it was our last morning here, I decided to bird from the tower for an hour or two just after dawn.


This was a good decision, and even though the birding was a little slow at times, occasional individuals would pass through the nearby trees. I love watching an area come alive at dawn and the tower provided a perfect vantage point. Two of the species I identified were new ones for me; they both happened to be Borneo endemics as well. A trio of Charlotte's Bulbuls (E) passed by, and two Yellow-rumped Flowerpeckers (E) also made appearances. While sitting up on the tower I took advantage of the surprisingly good cell reception and called home, catching up with mom and dad who were enjoying a beautiful autumn evening in Cambridge.

We enjoyed our last breakfast at the lodge, said our goodbyes, and loaded into the boat for our final trip. This time we would not be searching for wildlife - it was just a quick jaunt down the river to Sukau where our bus was waiting for us. The plan for the day was to make the long drive from Sukau (#7 on the below map) to the Danum Valley, which is #9 near the bottom of the map. Along the way we would stop at the impressive Gomangtong Caves (#8) for a couple of hours. 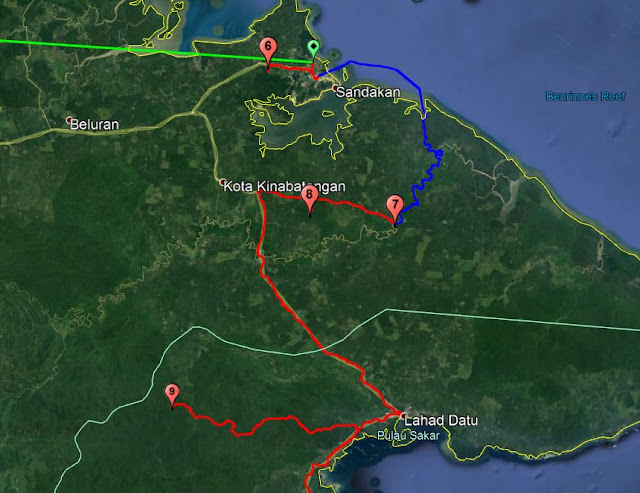 Following a short drive through the countryside we approached the Gomantong Caves. Within the immediate vicinity of the caves a large swath of forest had been protected, preventing the land from the insatiable saws of the logging industry and the resulting oil palm plantations that have taken up so much of southeast Asia.

We followed a boardwalk through a section of forest that eventually opened up near the main cave entrance. Along the way several impressive centipedes were seen, while a Black-crowned Pitta (E) called from somewhere off of the path. 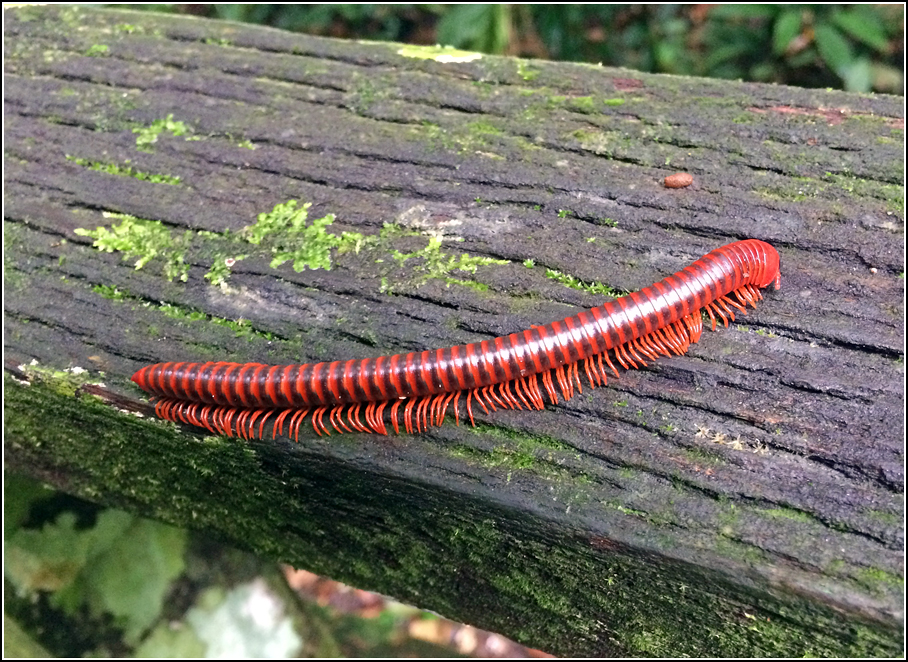 Near the entrance to the cave in an open area, several of these skinks were easily seen. I believe they are Common Sun Skinks (Eutropis multifasciata) but I could be mistaken - resource materials for the skinks of southeast Asia are not exactly easy to come by on the internet.


The caves themselves were nothing short of impressive. Upon entering the massive chamber of the first cave, a rush of cool air blew past us, while the high pitched twitters of thousands of bats and swiftlets filled the air. The distinct aroma of guano was immediately obvious, and the odorous substrate was 10-20 feet deep in areas. Stepping on the guano would instigate a dozen or more cockroaches to instantly appear in the boot impression left behind. The total biomass in these caves must be incredible, between the bats, swiftlets, but especially the cockroaches.

The walls were covered in cockroaches of varying sizes. For someone who becomes a little squeamish in situations like this, the caves must be like something out of a nightmare. But for a naturalist like myself, I was in a guano-filled heaven!

Three species of swiftlets nest in these limestone caves, each named based on the colour and composition of their nests. We observed the Mossy-nest and Black-nest Swiftlets on the walls of the cave, but the White-nest Swiftlets nest in a different part of the cave system. These swiftlets are virtually indistinguishable in flight, especially in the low-light conditions afforded in the cave, but the nests are quite distinctive. These swifts produce the nests that are harvested and used to produce birds-nest soup, an expensive delicacy in southeast Asia.


The White-nest Swiftlets create the most coveted nests since mud or organic materials are not incorporated into the nest, but the nests of Black-nest Swiftlets are also harvested; these nests are considered lower quality because mud is incorporated by the swift into the nest. The Mossy-nest Swiftlet's nests are not harvested due to the high amount of organic material added by the swift. The harvest of swift nests is a regulated activity in Sabah, to prevent indiscriminate collecting. At certain times of the year, licensed harvesters will climb up precariously built scaffolding to collect newly created nests. 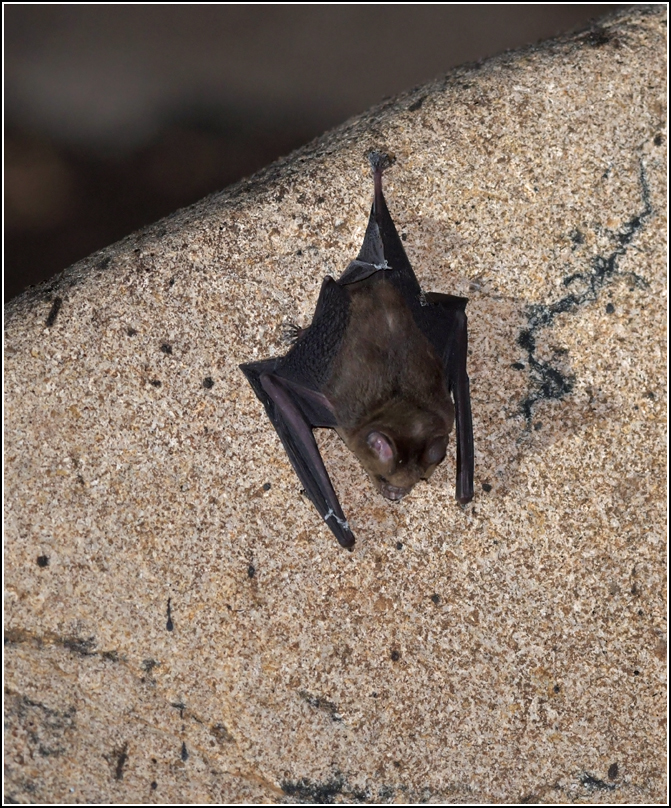 Any sick or injured swift or bat does not last long on the floor of the cave. The cockroaches make quick work of any unfortunate organism, such as the below swiftlet which was on the railing beside the boardwalk.


Of course, no cave is complete without rats. This is a Müller's Rat, the most common rat found in limestone caves in Borneo.


While the cave was fascinating to explore I think each one of us was a little relieved to exit and breath some fresh air. It was now close to noon and the day was heating up, though we still found a few birds as we retraced our steps along the boardwalk through the forest. Along the way some of us had good but brief views of a Hooded Pitta, while we also found a pair of Black-naped Monarchs and a White-crowned Shama (E) that cooperated nicely alongside the boardwalk.

We enjoyed the air conditioning of the bus as we embarked on the long drive to the Danum Valley. Most of us took advantage of a little bit of shut-eye on the drive. After all, we were not missing much out the window except for vast tracts of oil palm plantations.

Finally we turned off the main road and began driving towards the Danum Valley. This corner of Sabah contains some of the best quality remaining primary forest in Borneo. The protected area includes 438 square kilometres of untouched lowland dipterocarp forest, which is in turn surrounded by managed forest that includes teak plantations interspersed with intact forest.

Our bus driver made a great spot as we rumbled along the gravel road. It was a big male Bornean Orangutan! We all awoke relatively quickly and stumbled from the bus to have a better look at the ape.


The Bornean Orangutan was a "flanged" male; referred to that way because of the fatty cheek-pads on the sides of the face. Only the mature males exhibit these flanges, which help demonstrate dominance and which females find highly attractive on a male. Bornean Orangutans with flanges show higher levels of testosterone than unflanged males.

By the time that my camera had defogged itself, he had retreated behind some vegetation and a clear shot was no longer an option - this was the best I could do. Regardless, we were all pretty happy to have had such good looks at a flanged male Bornean Orangutan.


We were all a little more attentive for the remainder of the drive, as we entered the reserve and were suddenly surrounded by pristine forest. Along the way we observed our first Bearded Pig, followed by a Red Muntjac which paused along the side of the road long enough for most people to have good looks through their binoculars. Just before dusk we rolled into our accommodations for the next three nights - the beautiful and decadent Borneo Rainforest Lodge. The skies opened up upon are arrival, but we were met by the lodge staff with towels and welcome drinks, which hit the spot after a long afternoon on the road.

That night we set out for a night drive with our guide, Azmil, who would be with us for our three days in the Danum Valley. The bed of the truck had been outfitted with two rows of padded benches where we sat facing the middle, while Azmil stood and faced forward while scanning around with a powerful halogen spotlight tied into the trucks electrical system. If he spotted something, he signaled to the driver with his light. He had different signals for different commands, such as stop, go backwards, go forwards slowly, and continue onward. Despite the rain that was at times heavy, we had a moderately successful drive thanks to the excellent spotting ability of Azmil. Some of the highlights included Palm Civet, Sambar Deer, Malay Civet and a File-eared Treefrog (Polypedates otilophus).  Eventually due to heavy rain we were forced to head back early, but it had been a nice introduction to the Danum Valley.