The Guianan Red Howler Monkeys began calling well before dawn, followed a short time later by the sound of rain falling on the roof. We waited it out while having coffee and tea, but the clouds had descended and visibility was poor. Eventually we made the decision to forgo one last morning on the canopy walkway. Given the conditions, we would not have seen very much anyways.

Thomas would be arriving sometime after breakfast to transport us to our next lodge, Surama, so time was rather limited this morning. We packed up our gear and ate breakfast and the rain stopped shortly thereafter.

Delon was able to pull out one more epic bird for us while we were enjoying breakfast (bake, which is a doughy pastry, eggs, fruit, and pepperpot, a traditional Guyanese dish made with beef). Once again, it was the cotinga tree that pulled through.

"Crimson Fruitcrow!" Delon proclaimed and I went running for the scope. Guyana is full of unique cotingas, and the Crimson Fruitcrow is high up the list of most-desirable for visiting birders. Until only a few years many facets of its life history were unknown. It is the only member of the genus Haematoderus, and spends much of its day sitting quietly in the canopy where it keeps a sharp eye out for its preferred prey - large insects such as cicadas, beetles and katydids. Crimson Fruitcrow is almost entirely restricted to the Guianan Shield, though recently some have been discovered towards the Amazon River. The forests of central Guyana are some of the more reliable places to encounter this bird, yet even still, it took until the 11th hour for Laura and I to encounter one (thanks to Delon).


For close to 30 minutes the Crimson Fruitcrow sat in the cotinga tree, generally sitting still but making a few quick sallies to snag large insects. It was great to have a prolonged chance to study an enigmatic species like this for so long in the scope. Below is a quick video I made with my phone through the scope.


The "cotinga tree" is the tallest one in the image below. Due to its height above the rest of the canopy it is a preferred vantage spot for many species of birds, cotinga or otherwise.


Thomas arrived and we said our goodbyes to Delon, Kendrick, John, and some of the other staff at the lodge. Just as we were leaving I spotted a small bird on the lawn which we identified as a Chestnut-bellied Seedeater, the last lifer before we hit the road.

Surama EcoLodge is situated partway between the town of Annai (where Rock View Lodge is located) and Atta Lodge. It lies in a transitional area between the savannah to the west and the forest to the east, and contains a variety of different habitats. Between Atta Lodge and Surama Ecolodge is a location where Guianan Cock-of-the-Rocks nest so I inquired with Thomas if he knew of the area and if he would be willing to stop for an hour while we check it out. Thomas knew of the spot (I had maps with its location just in case), so by mid-morning we parked along the side of the road and walked down a narrow trail scarcely visible from the roadside.


One of the more spectacular birds found in Guyana, the Guianan Cock-of-the-Rock is a species of cotinga that is limited in range to the Guianan Shield region. Males gather in groups called leks, where they bob and weave, showing off their spectacular plumage and slick moves, in hopes of gaining the affection of a female. Preferred lekking areas are often located near caves or rock faces where the females nest, and this lek was popular with visiting birders because it can be accessed by a short 15 minute walk off of the main highway.


We walked to the caves, pausing briefly to investigate a mixed species flock which included my first Brown-bellied Antwrens. We walked up to the caves, took a look down the hillside and immediately noticed several fiery-red blobs in the understorey. Guianan Cock-of-the-Rocks!


Two males were present and one of the males performed a half-hearted display, fluffing himself up and bobbing up and down on his perch. After about 10 minutes both males dispersed into the forest. Lekking only takes place for part of the day, then it is time to forage.

We found a single female sitting on a nest along one of the rock walls. The differences in plumage between males and females really is quite dramatic.

While we watched the cocks, some rustling in the trees above provided us with our first excellent looks at Guiana Spider Monkeys!


It was a productive stop on our way to Surama, and broke up the drive nicely. I should mention that today was Laura's birthday as well, and the morning had been filled with some great sightings: Guianan Cock-of-the-Rocks, Guiana Spider Monkeys, and a Crimson Fruitcrow!

An hour later we rolled into Surama Ecolodge. Laura had taken Gravol prior to the drive to Surama and as a result did not feel any nausea; she even managed to doze off for a bit along the drive.


Surama Ecolodge is run by Surama Village, home to approximately 300 people. The lodge is entirely community-run and all of the profits go directly back into the community, for the purposes of conservation as well as community development. Surama Ecolodge is located at the edge of Surama Village and is located within an area of savannah and surrounded by forest. The Burro Burro River is located about about five kilometers from the lodge deep within the forest.

Lodging at Surama Ecolodge is in the buildings shown above, which are somewhat similar to traditional benabs used by the Macushi.


Four benabs circled the main building, which included the dining area at the ground level, and a bar and sitting area complete with hammocks, above. The building was open air and was a great location to sit and read, journal, or watch the savannah.  When viewed from the sky, the main building plus the four benabs takes the appearance of a jaguar footprint.

Upon arrival we were shown to our benab, enjoyed lunch, and then relaxed while we waited for our guide, Stefano, to arrive. I went for a walk in the savannah near the main lodge while Laura caught up on some journaling. Highlights from my walk included a Plain-crested Elaenia, several Rainbow Whiptails, and some flyover Golden-winged Parakeets and Chapman's Swifts.


Soon Stefano arrived to meet us and to discuss the plans for the upcoming days. Like at Atta previously we had three nights scheduled at Surama. Stefano was a relatively new guide, and made it clear from the start that he was really only interested in birds. Laura and I tried to stress that our interests included herps and mammals especially, in addition to birds, and that we did not want to spend our entire time at Surama only looking for particular stakeout birds. We wanted to explore the forest and look for herps primarily, with a little birding here and there. Stefano wanted to spend the afternoon trying for several species of crakes in the long grass near the lodge. As this wasn't exactly the sort of thing that Laura really enjoys (and it was her birthday, after all!), I suggested instead we explore some of the nearby forest in the afternoon.

Laura and I headed back to the benab after our meeting with Stefano since we had about two hours to kill before our late afternoon walk was scheduled. I had been going pretty hard all trip without taking any breaks - I didn't want to miss any lifers - and so I lay down on the bed for five minutes (which turned into 90 minutes, somehow...). It was certainly needed and I woke up feeling a little groggy but definitely refreshed. 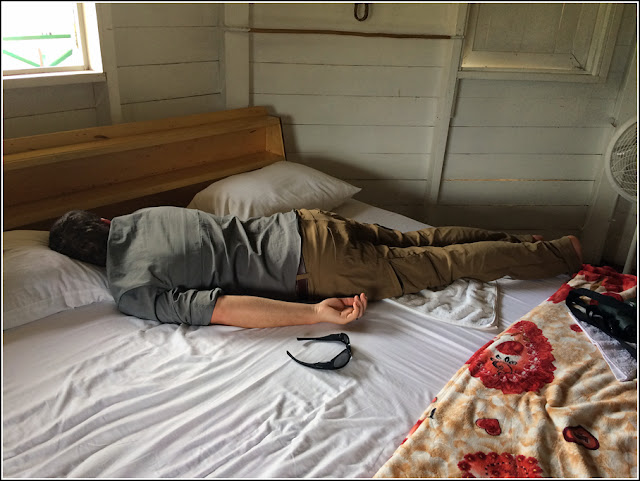 Common Tody-Flycatchers were nesting near our benab, while a tree by the main lodge was populated with several dozen hanging nests belonging to Yellow-rumped Caciques. Savannah Hawks patrolled the grounds, including one youngster that was quite content to sit out in the open about five meters from where we were sitting at the main lodge.

A band of rain approached from the east in the mid-afternoon, sweeping across the savannah in front of us while we sat in the main lodge and watched.


The rain cleared, Stefano arrived, and we set off down a path towards the forest.

The walk was great and we saw a nice variety of species, plus it was good to chat with Stefano and get to know him. He was from a different village but moved to Surama since his wife was from there. Following our time at Atta with Delon, the differences between Delon and Stefano were quite drastic since Delon was an incredible birder while Stefano was still learning his craft. Part of the problem was that Stefano did not have access to any tapes, nor did he have sufficient optics, because the lodge was not able to provide them (meanwhile Delon had all the bird songs plus an excellent pair of binoculars and scope). At times it did feel like we were guiding Stefano, as he frequently looked to me to come up with an identification when we heard something in the forest or saw a bird in a distant tree. That being said, he was a great spotter and he noticed several roosting Spix's Guans in the canopy. He was full of enthusiasm as well.


At one point Stefano brought us to an area where he had a stakeout bird to show us. Laura's eyes were too keen and she spoiled the surprise, spotting the Least Nighthawk roosting in the tree before Stefano had a chance to point it out!


As dusk fell we turned back from deep within the forest to make the twenty minute walk to the lodge. Quite a few tinamous were calling and I identified Cinerous, Red-legged, Great and Variegated. I also pointed out a singing Tawny-bellied Screech-Owl and a Blue-throated Piping-Guan to Stefano and Laura, and we saw several Weeping Capuchins scampering in the tree tops. All told it was a great walk! As we hiked back to the lodge, several Lesser Nighthawks flew low over the savannah near the main lodge.  We spotted eyeshine on the main trail and I quickly got the scope on the Common Pauraque (after Stefano had spent a while trying, unsuccessfully). Stefano then took a good long look in the scope and I had to eventually ask him to let Laura have a look. He stepped aside but the bird flew a few seconds after Laura peered in the scope. Clearly Stefano was excited to see this species well in the scope, but it did feel like we were providing the guiding service to him as opposed to the other way around.

We showered and had dinner at the dining hall which was a little uninspiring when compared to the amazing meals we had experienced at the other lodges. Dinner consisted mostly of starches with a little meat and few vegetables, and unfortunately no dessert for Laura. I had also informed the lodge ahead of time that Laura's birthday was on February 2 and hopefully they could provide a cake, but unfortunately this had been completely forgotten by the lodge. At any rate we were not about to let some negative things ruin our time at Surama. After all, it was located in a beautiful spot full of amazing wildlife. The next few days would be an improvement!