Mitú - The Bird Of The Year at Urania

Birding can bring joy in many different ways to me. There is the peacefulness and serenity that comes with leaving the busyness of the world behind and going for a hike in a forest while keeping an eye and ear out for the birds that reside there. There is great satisfaction that comes from knowing a bird intimately after hundreds of encounters with that species and observing its behaviours. It is fulfilling to learn about how every species fits into its ecosystem, or how weather impacts bird migration, and each time out exploring can add a little piece to that puzzle. But without a doubt, nothing beats the thrill that comes with finding something completely unexpected - a rarity of some kind.

Typically, most rarities that I have found are species which may be frequent in one part of the world, but are not at all expected in another. For instance, a Bell's Vireo may be a common bird in parts of the southern United States, but when I found one out of range in St. Catharines, Ontario, it caused quite a stir! Seeking out rarities provides the motivation for many a birding outing back home in Canada.

But not all rarities are out-of-range "vagrant" species. Sometimes, a rarity could be a resident species that breeds in very low numbers. I would imagine that finding, for example, a new population of Kirtland's Warblers in southern Ontario would be just as adrenaline-inducing as discovering a rare vagrant species.

One of the most tantalizing aspect of birding in the Neotropics is that the opportunity for discovery is vast, and not just with out of range vagrant species. The overall biodiversity is obviously so much higher in the Colombian Amazon compared to southern Ontario. Many regions have not been surveyed thoroughly (or at all), while there are many species whose breeding ranges just are not well studied. Even species completely new to science are described regularly from South America.

March 6 was our last full day in Mitú, and therefore, one of our last days in Colombia before journeying to Costa Rica. And boy, did we make it count. While the bird highlight that I'm alluding to in this introduction was not a completely new species to science, it was an incredibly unusual find and probably the rarest bird that I have found to date.

We made the short drive over to the Urania bridge in the tuk-tuk, arriving at dawn. Our plan was to explore the forest beyond the community of Mituseño Urania which eventually leads to a cliffside where Guianan Cock-of-the-Rocks nest.

The morning started off well. Early on, we spotted a newly arrived spring migrant: an Upland Sandpiper walking on a lawn! Upland Sandpipers winter in the pampas of southeastern South America, passing over the Amazon each spring and autumn. This was my first one seeing one on migration in the Amazon!

A little while later, we passed a black rock outcrop that provides a good view over the surrounding forest. We heard a Red-fan Parrot, while I photographed a different parrot that was flying by at a distance.

Upon zooming in on my photos, it was clear that this was a Kawall's Parrot. This species was formerly thought to be endemic to Brazil but in the last five or so years it has been occasionally seen in Mitú, Colombia. Urania is one of the best sites for Kawall's Parrot in Mitú and I was pleased to see my first.

We reentered the forest and had only walked a short distance when the magical moment occurred. Miguel was a little ways in front of Laura and I and he stopped when a tinamou appeared on the path up ahead. We watched the tinamou as it crossed, thinking it was likely a Little Tinamou. I was pretty thrilled since, despite hearing Little Tinamous in a lot of different areas, I had only laid eyes on this species once or twice previously. Once the tinamou was back in the forest I visually tracked it and attempted some photos. After all, I had never photographed a Little Tinamou before! With some effort I managed a few low-quality photos that us birders call "record shots". But something about this tinamou seemed wrong if it was indeed a Little Tinamou. Shouldn't they have a gray head and a tawny body, not the other way around?

With additional photos, obvious rusty barring is visible on the back, a trait that Little Tinamou should not show. This is probably the best photo of the bunch, though its quality is not great.

Laura, Miguel and I conferred once the tinamou had slipped back into the forest. I checked Merlin, an app that Laura and I have on our phones which is an online field guide. This bird was clearly no Little Tinamou, nor was it a Variegated Tinamou which also shows barring on its back. Luckily, Miguel had a paper copy of a field guide with him and we instantly focused on one particular tinamou that was illustrated: the Barred Tinamou. It seemed like a perfect match. The map showed that the species does range into southeastern Colombia.

It was puzzling. How had I not heard of this species until now? Normally, I am a little bit obsessive when it comes to preparing target lists of all the potential lifers I could see on a trip. If a species has been reported a couple of times from the province/state I am visiting, I make sure that I am ready for it, knowing where are the best sites as well as reading up on its habitat and behaviour. But Barred Tinamou had never reached my radar.

I did not have cell service where we were hiking and so I put the tinamou sighting on the back-burner and focused on the task at hand. And it was an excellent walk! We found many great species including our first Pale-tailed Barbthroat for Colombia, a Collared Gnatwren, a Brown-winged Schiffornis and five species of manakins. A Tayra ran across the path. Some of the specialty birds of Mitú made appearances such as Spot-backed Antwren, Bronzy Jacamar, Fiery Topaz (again!) and a Brown-banded Puffbird. The puffbird I was especially thrilled with, since the one we had found in Inírida was heard-only.

We spent some time with the Guianan Cock-of-the-Rocks before turning around. It doesn't matter how many times you see them, but cock-of-the-rocks are just ridiculous and easy to appreciate!

In my never-ending quest to photograph as many bird species as possible, I finally managed passable shots of an Amazonian Grosbeak. We heard the beautiful song of this species on numerous occasions but usually the vocalist was just out of sight, deep in a thicket somewhere.

We kept an eye out for snakes (as always) but this time they eluded us. Several unique frogs, lizards and insects were easily accounted for, however.

One of the last new birds for our morning checklist was a crisp Yellow-bellied Dacnis in the town of Mituseño Urania. We checked again for the Upland Sandpiper, but the lawn was now vacant. We finished with around 110 bird species for the morning.

I could hardly wait to return to an area with cell reception so I could research the tinamou from earlier. The first order of business was to look up Barred Tinamou on eBird so that I could compare photos and view the range map. But when I looked up the page for Barred Tinamou, no images appeared. I thought it was a weird glitch with the internet and reloaded the webpage. But there were still no photos available. And the range map showed only six pins, meaning that the species has been eBirded before on only six other occasions. This was interesting!
I sent the photos around to some others and the consensus came back that this was indeed a Barred Tinamou. Though there were no photos of this species on eBird, after some searching I found two photos of Barred Tinamous from Peru, the only other photos that I could find anywhere of this species. Reading the species account on the Birds Of The World website, I learned that the Barred Tinamou was described in the 1920s but to this day, virtually nothing is known about its life history or habits. There are known records from an isolated site in northeastern Peru, while occasional reports have come in from southwestern Venezuela and far eastern Colombia, and the species apparently lives in dense forests on sandy soil in its small range.
Basically, the Barred Tinamou is a near-mythical species that has only been encountered by a very small handful of ornithologists. Laura, Miguel and I count ourselves lucky to be some of the only birders to have ever laid eyes on this species, and to have photographed this species for potentially the third time, ever. I think that this is the first sight record for Colombia, though there are several heard-only records. Of course, if anyone reading this is aware of other sight or photographic records, I would be greatly appreciative to learn of this info.
It will be interesting to see if this species is encountered more frequently in Mitú now that it is on people's radar. I would assume that the infrequently visited trail beyond Mituseño Urania will receive considerably more visits from birders in future years in hopes of striking it lucky!
That evening, Laura and I geared up for our one and only night hike in Mitú. It was going to be our last evening so we had to give it a shot! Miguel and Felix were game and as dusk fell, we found ourselves in the Linea Bocatoma area where we had spent our first morning birding. The habitat seemed promising and so we were hopeful for some fun nocturnal finds.
We spent several hours tromping in marshy areas and slowly patrolling the roadside, finding many ecological curiosities. Snakes remained frustratingly out of sight, but there were many other things to point our flashlights at. 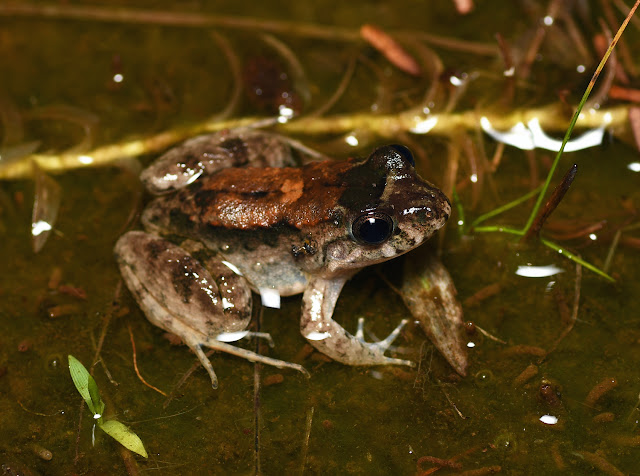 At one point, we drove a little ways to an area where a large wetland passed close to the dirt road. A pair of Tawny-bellied Screech-Owls were quite vocal and it did not take much work to obtain excellent views of them. I kept blowing my chances at photos though, which was a little frustrating. At least the frogs were a bit more accommodating.

Our snake drought did not last for long. It was Laura, of course, who came through in the 11th hour. We were mere minutes away from wrapping up the hike when she spotted a little viper coiled in some waist-height shrubbery!
It was a type of Lancehead or Fer-de-Lance, but this is the species found east of the Andes known as the Common Lancehead (Bothrops atrox).

This was actually a lifer for Laura and I since we have had terrible luck with Fer-de-Lances on our previous trips to the Amazon. We spent a few minutes with the cute little viper, taking care not to get too close, of course!
And with that, our final full day in Mitú came to an end. What a day...
Posted by Josh Vandermeulen at 22:10