There is a level of giddy anticipation that comes with researching a country and its species for the first time. Opening a field guide published about an unfamiliar corner of the globe reveals a treasure trove of information about the exotic and unique creatures which call that place home. By completing a baseline amount of research - perhaps by perusing a trip report, or by scanning eBird for the reddest (and therefore most bird-diverse) hotspots in that country, or by hearing a friend regale you with tales of a previous adventure - one begins the journey of discovery, the thrill of learning something new and exciting about a tantalizing destination.

I initiated this baseline level of research for Peru around seven years ago, in anticipation for a tour that I was scheduled to lead. Unfortunately, the tour fell through and I put Peru on the back burner for a little while. But during this bout of research, one place was referenced time and time again: Manú Road.

Over the years, whenever I came across anything bird-related about Peru, Manú Road was inevitably mentioned at some point. And for good reason! Some say that it is the most biodiverse road on Earth and it is hard to quibble with that assessment. Beginning high in the mountains east of Cusco, Manú road descends from above the tree-line to the Amazon lowlands, passing along the mega-biodiverse east slope of the Andes. It transects an altitudinal gradient of well over 3 kilometers.

Much of the length of Manú Road runs adjacent to the Manú Biosphere Reserve and other protected areas, such that the scenery along its upper and middle reaches is some of the most magnificent in the world. There is just unbroken forest as far as the eye can see. The east slope of the Andes holds some of the rainiest forests on earth, since humid air over Amazonia condenses as it passes westward over the Andes. Turn on the taps, and you turn on the biodiversity.

Nearly 1000 species of birds have been reported along the length of Manú Road, a staggering number indeed. Of course, this insane level of biodiversity is mirrored with all other organisms that reside in Andean or Amazonian ecosystems. 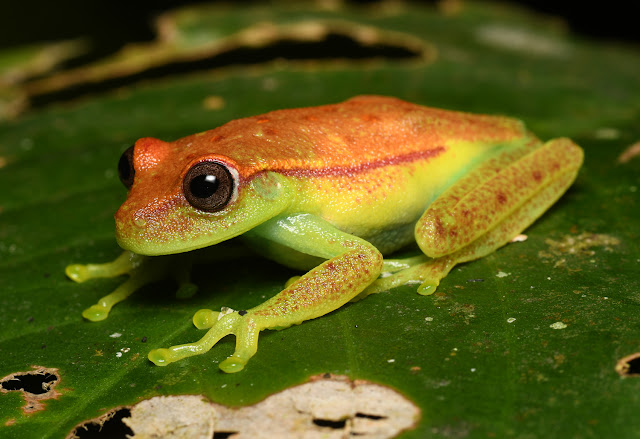 Laura and I saved the best for last during our trip, and we budgeted for almost three weeks to explore various sites in the Amazon basin as well as Manú Road. Needless to say, we were excited.

Before journeying to the beginning of Manú Road, Laura and I detoured to an alpine lake, often visited by birders. While we had already encountered most of the birds targeted by birders at Laguna de Huacarpay, the Streak-fronted Thornbird had eluded us. Our dawn arrival was timed perfectly to search for the thornbird.

Unfortunately, the thornbird was nowhere to be found but we had an enjoyable morning, anyways. Many-coloured Rush-Tyrants put on a show, we spied several Cinereous Harriers over the reedbeds and we had our best views ever of Rusty-fronted Canastero. We did not linger too long since Manú Road awaited.

The rest of the drive to the upper reaches of Manú Road was largely uneventful. We passed areas of farmland, Eucalytus copses and small towns through the series of inter-Andean valleys that stretch between Cusco and the east slope of the Andes. Road works derailed our plans somewhat as we had to follow a confusing detour, but asking some locals for directions put us on the right path. We crested the final ridge just before noon. The sunshine from the dry valleys disappeared behind us as we were met with a wall of clouds. We were definitely on the east slope.

Laura and I had plans to spend the night at Wayqecha Biological Station, giving us a couple of hours to kill along the uppermost reaches of Manú Road. We attempted to drive down Carretera a Tres Cruces, but the guards manning the gate at this reserve would not let us through without charging us a pricey day-use fee. We passed on that.

My main target down that road was the range-restricted Scribble-tailed Canastero, the only one of Peru's nine canasteros that Laura and I had not yet found. We resolved to return to Carretera a Tres Cruces later on in the trip when we had more time available to justify the entrance fee.

But that would not be required after all. We lucked out with a pair of 'scribblers' a few kilometers further down Manú Road!

We tried birding at various points between here and Wayqecha, but heavy fog had ascended up the slope and blanketed our position, making birding very difficult. The afternoons can be tough up here, with fog and rain practically guaranteed during parts of the year.

Luckily, Wayqecha was clear of the fog, giving us hope that we could have some productive late afternoon birding.

Though Manú Road provides physical access to a ridiculous amount of biodiversity, it can be difficult to explore it cheaply. Most birders hire local guides to take them around and they stay at various ecolodges which are strategically placed at certain elevations. This was out of our budget; we resolved to visit Manú Road on our own via a rental vehicle.

Run by Amazon Conservation, Wayqecha doubles as a biological station as well as a lodge for birder/naturalist types. While it is far from inexpensive, Wayqecha is cheaper than the various ecolodges along Manú. Laura and I chose the dormitory option which cost us $70 USD each per day. This included all meals and full access to the trail system (and guides were not required to use the trails). Laura and I booked only one night at Wayqecha. It was a welcome surprise when, upon arrival, we were informed that we had been upgraded to our own chalet, as opposed to staying in the dorm with the researchers (we were the only tourists here during our stay).

During our first afternoon we explored part of the trail system, choosing Trocha Zorro (trocha is a Peruvian term for trail) which explored some of the higher elevations roughly parallel to the main road. The birding was good in spite of the heavy overcast conditions, and we quickly tallied our first Rufous-capped Thornbill.

Since we only had one night at Wayqecha, Laura and I resolved to make the most of it. Even though Wayqecha's elevation ensured that the evening temperatures were rather cool, this did not hamper the moth diversity. I set up my sheet next to the chalet and we marveled at the diversity that appeared during the evening hours. Below is a small selection of the goods. 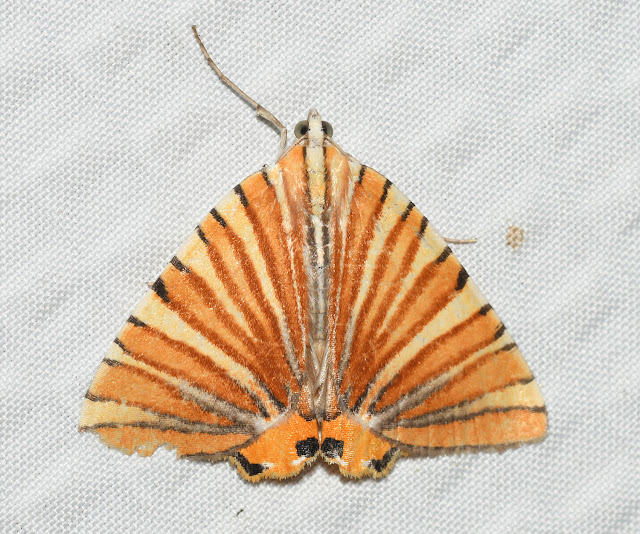 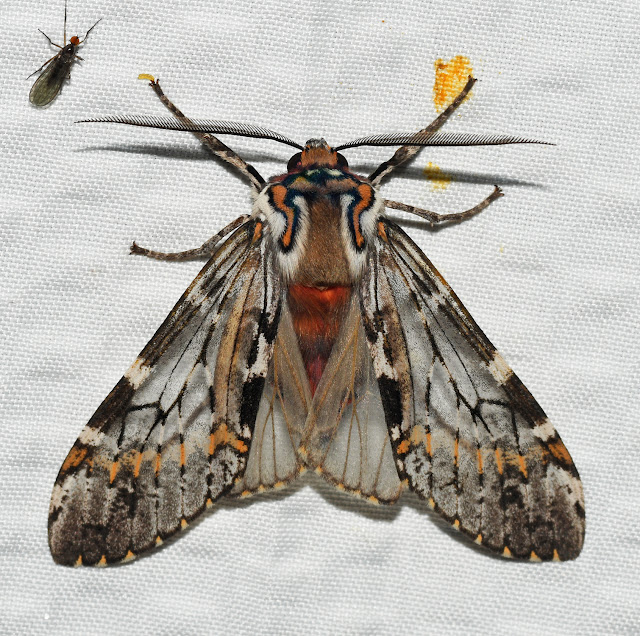 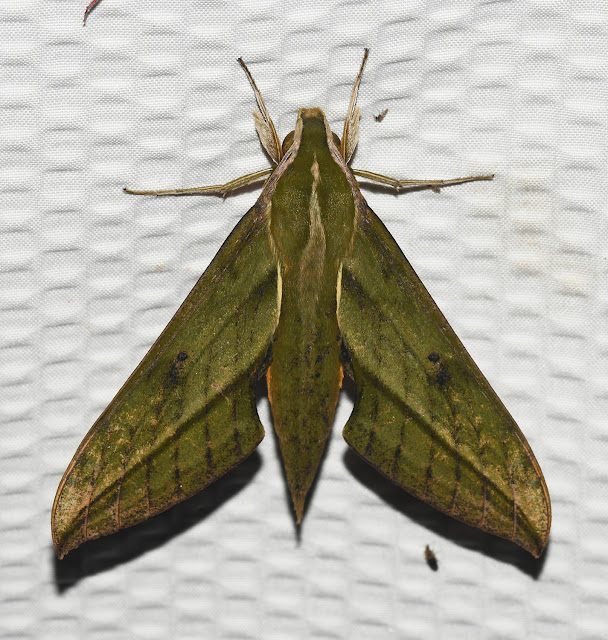 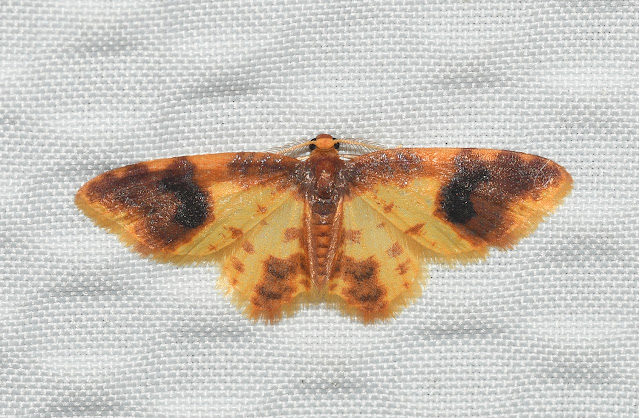 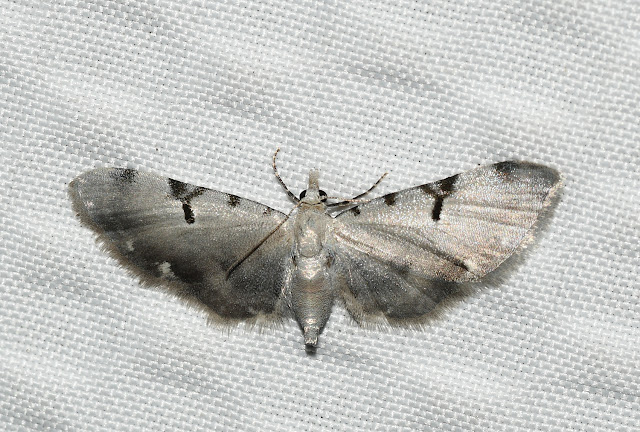 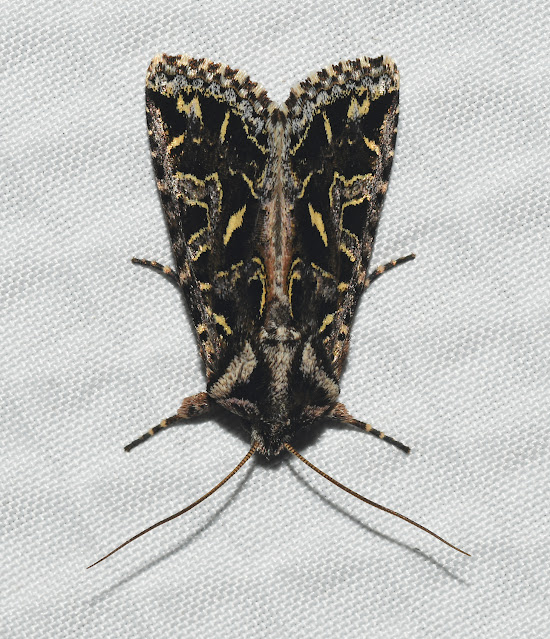 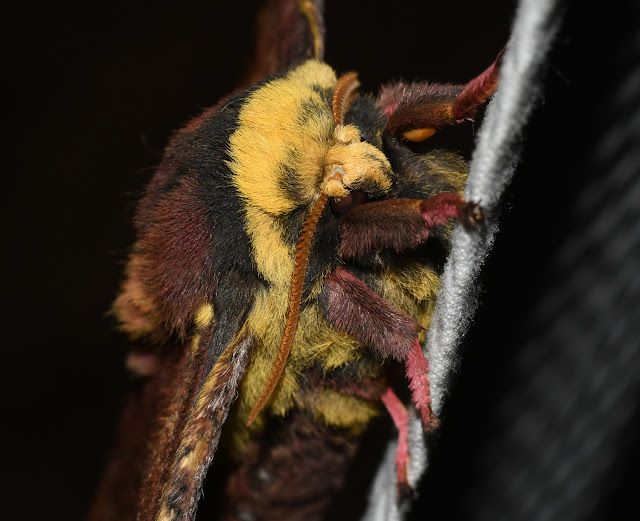 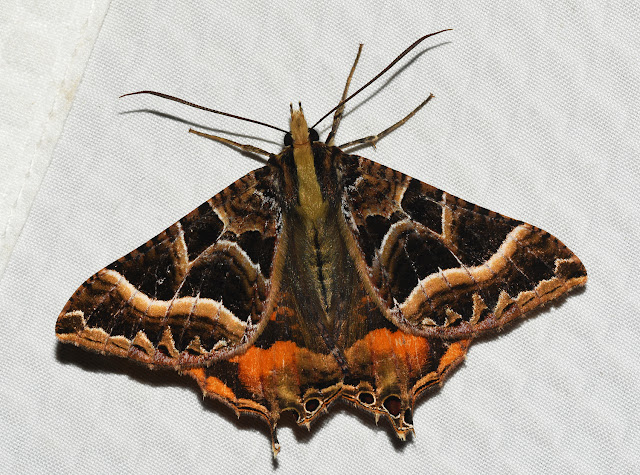 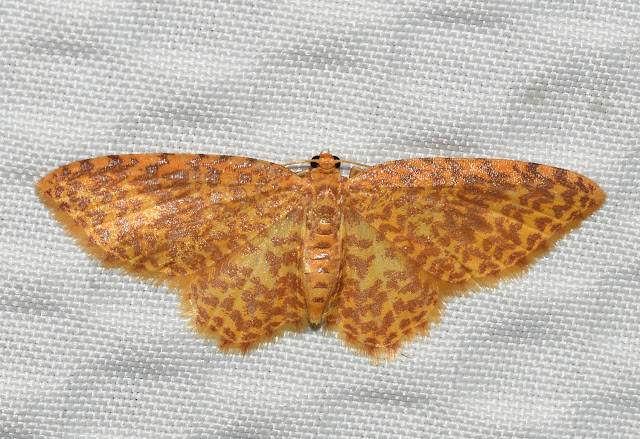 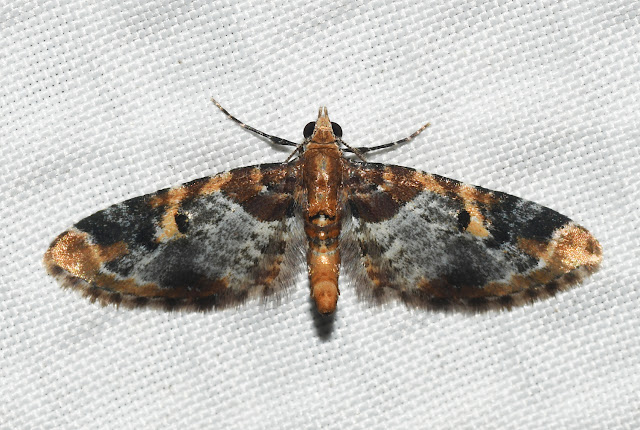 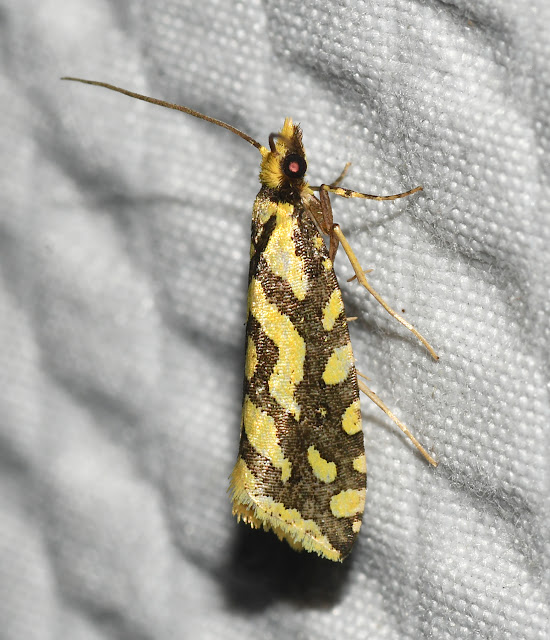 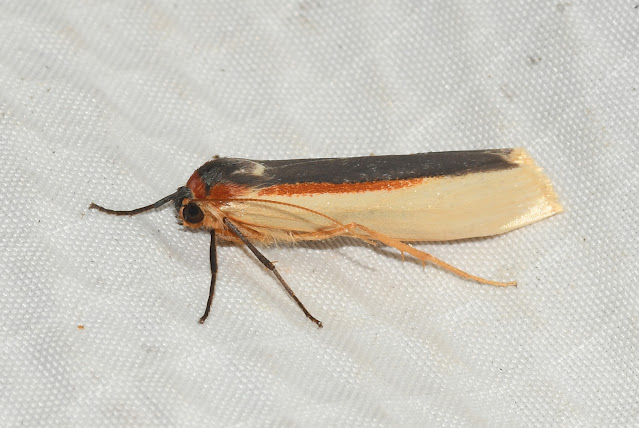 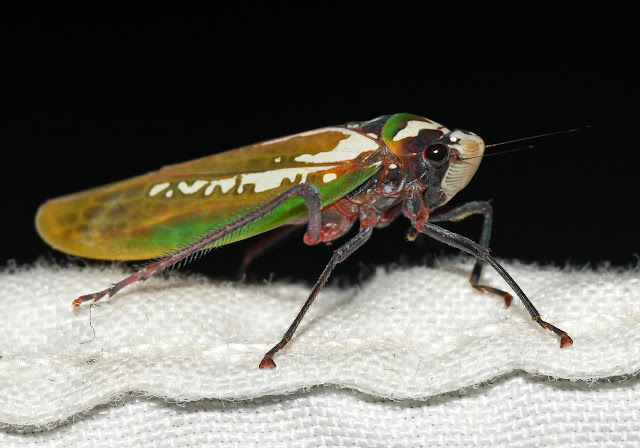 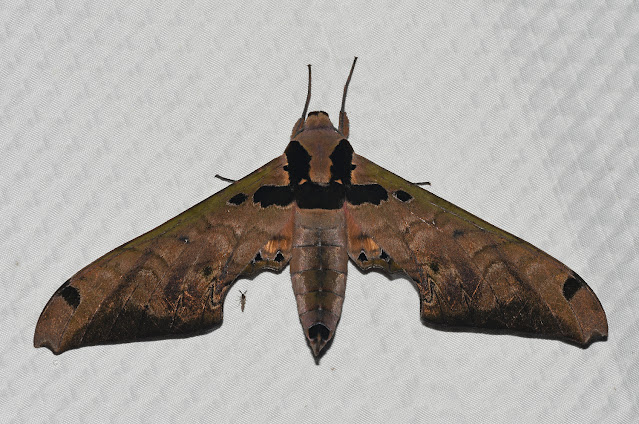 September 3, 2022
Laura and I spent the morning on the trail system at Wayqecha. Though the system is extensive, Wayqecha's location along the side of a ravine means that you are either walking up or down. There is very little flat ground! However, some of the trails are cut into the side of the valley, running parallel to the river, helping to minimize the constant elevation changes.
One advantage of exploring the trail system instead of walking along Manú Road is that the trails provide a chance to observe rare skulkers like tinamous, wood-quails, antpittas or antthrushes. And while we struck out with the former two groups (only hearing Brown Tinamou and Stripe-faced Wood-Quail) we lucked out with the latter two. We spotted an Urabamba Antpitta early on in the morning, while we later played hide-and-seek with a Barred Antthrush that provided brief views. Several other antpittas remained as heard-only including Red-and-white and Leymebamba.
The birding was slow at times, but with some effort our species list for the morning grew. Mixed flocks contained a nice variety of tanagers and flycatchers.
The only lifer of the morning came in the form of a Fulvous Wren.
Laura was feeling under the weather and so she followed the main road back to the station, while I stayed out and birded along the Canopy Trail, eventually reaching the canopy walkway.
Fog had descended at this point, minimizing the chances of flyby raptors or parrots. Luckily for me, a mixed flock passed through below eye-level.


The Canopy Trail produced a few more gems on the way out: a Maroon-belted Chat-Tyrant, a Golden-browed Chat-Tyrant, and several Puna Thistletails.
The variety of orchids and other plants along this stretch of trail provided a strong distraction.

The rain threatened but ultimately held off during the walk along the road back to the lodge. Obtaining my first good views and photos of a Rufous-capped Thornbill was a big highlight along here.

Laura and I packed up and left Wayqecha, having made the most of our 24 hours here. Our next destination: the Villa Carmen Biological Station in the lower foothills.
Posted by Josh Vandermeulen at 10:02