With the beginning of my busy work season fast approaching, I sped down to Point Pelee for one last weekend of taking in bird migration. While migration is starting to slow down, there are still a ton of birds moving and fortunately many of these touched down at Point Pelee over the weekend.

I did not arrive into the Pelee area until around 5:00 PM on Friday and I headed straight for the park, eager to walk some of the trails. The birding was actually pretty good along the west side, and I tallied about 70 species in a couple of casual hours of birding. I ran into Jeremy Bensette, Amanda Guercio and Tim Arthur as well; it was good to spend some time with them as we explored the Northwest Beach portion of the park. This Eastern Wood-Pewee, evidently a harbinger of many this weekend, posed nicely for us on a low branch.

On Saturday I was somewhat late arriving into the park so I skipped out on birding the tip area. Instead I parked at Black Willow Beach and went for a nice walk along the seasonal footpaths for a couple hours. The sun was shining, and the birding was pretty good! I had two main highlights along my walk. First up was a vocal White-eyed Vireo that I tracked down for some photos not far from the parking lot at Black Willow, followed by a Tufted Titmouse north of Pioneer about half an hour later. It has been an excellent spring for White-eyed Vireos in southern Ontario. At Pelee alone, this was already my fifth White-eyed Vireo I had found. Most springs I only find one or two it seems.


The birding was really productive, with birds spread out all along as I continued. Canada, Wilson's and Mourning Warblers are generally considered later migrants and all three had infiltrated the park in numbers.


When looking for "skulkers", Common Yellowthroats can be rather annoying at times! But they really are an attractive species (the males, at least) and I could not resist aiming my lens at this individual as he popped up onto a bare branch protruding from the Prickly Gooseberry understorey.


Baltimore Oriole just may be the most photographed bird species at Point Pelee, though Yellow Warbler and Red-winged Blackbird would also be strong contenders. While numbers of Baltimore and Orchard Orioles breed in the park, surely their numbers have been augmented by migrants passing through as well. This Baltimore Oriole was feeding down low as they often do at Point Pelee, providing great photo opportunities during May.


A few Brown-headed Cowbirds kept me entertained with their antics. These two males were clearly vying for the attention of a nearby female. Each male would take his turn contorting his body while producing his unique bubbly song. The individual that was not vocalizing would sit still with his head pointed up, trying to look as handsome as ever.


While its colours may not be flashy, Gray Catbird is a charismatic species with a large vocal reportoire that at times can be extremely furtive, while at other times strangely confiding. Usually, I hear this species making a racket from somewhere deep within a shrub, but occasionally one will sit out in the open with no apparent concern for my presence. 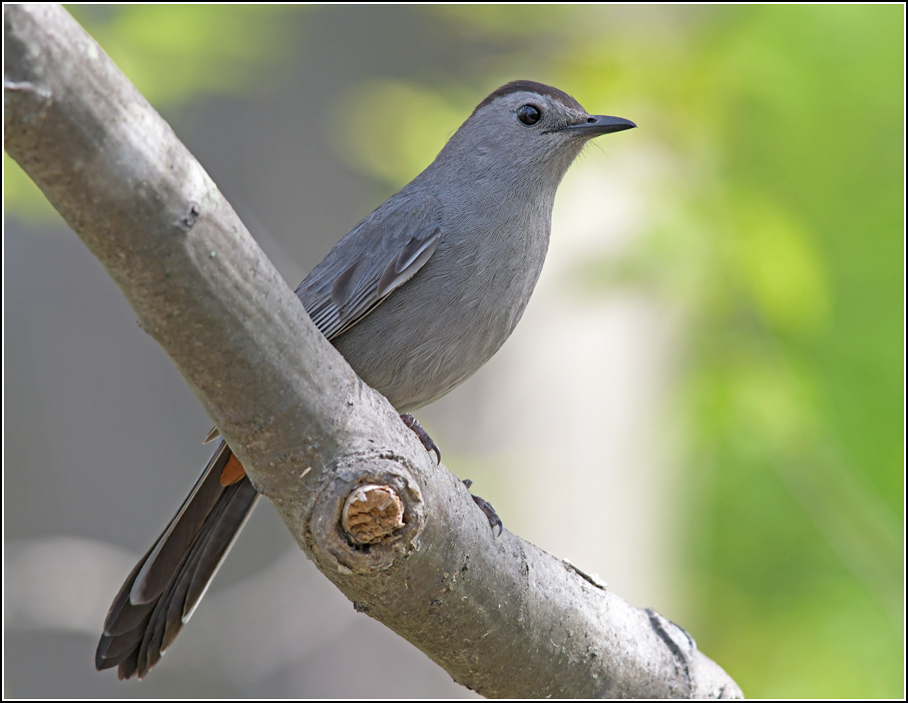 At one point I ran into Jeremy Hatt and Steve Pike on the trail so I birded with them back to where the vehicles were parked. Along the way we ran into a group consisting of Jean Iron, Barb Charlton, Garth Riley, Nancy McPherson, James Carrey, Debbie Pacheco and Henrique Pacheco. While most of the birders had left the park, a few of the die-hards were still sticking around. It was great to hang out and chat with everyone for some time, exchanging stories and gossip like birders often do.


For the afternoon I headed over to Kopegaron Woods for a little bit of birding and botanizing. I've started to take a greater interest in plants lately (in no small part due to iNaturalist) and it was fun to see what species I could find and identify!

Eventually I headed back into the park, making a quick stop at Wheatley Harbour along the way (where there was a single Willet). I had a great time birding with Steve Pike and Tim Arthur for a few hours before dark. The birding was a bit slow and the only bird I photographed was this Red-breasted Merganser resting on the beach.


On Sunday morning I was in the park at 7:00 AM, and it was not until 9:00 PM that I finally left. The birding was just all around really solid, and while one particular rarity stole the show, many other species kept us on our toes.


I parked at the West Beach parking lot, where a Green Heron, certainly a recently arrived migrant, was perched on a dead tree at the south end of the parking lot. My warbler count was already approaching a dozen species by the time I parked so I knew it would be a great day!


While walking down to the tip, I received a text notification from the Pelee Whatsapp group. Fully expecting another post about a Mourning Warbler or something, I was quite surprised when it was a message from William Konze indicating that he had just seen the Black-billed Magpie fly over Sparrow Field. I quickened my pace as the notifications came flying in, alerting us all with the play-by-play as to where the magpie was being seen.

By the time I had reached Sparrow Field, eyes to the sky the whole time, there had not been an update for about 10 minutes. Just then Steve Pike called me to say that the magpie had flown over his head at the tram loop. A few minutes later - there it was! I caught a quick glimpse of the bird as it flew south over Sparrow Field, but it was located directly between my location and that of the sun, eliminating any chance of good looks or a photo. Fortunately that would not be my only sighting; Dan Greenham pointed it out a few minutes later as it made another pass. All told I watched the Black-billed Magpie fly over Sparrow Field on four occasions.


Black-billed Magpies are commonly found throughout the prairies, including portions of Rainy River District and scattered other locales in northwestern Ontario. While the species is mostly sedentary they do occasionally show up out of range. The vast majority of these individuals are likely wild birds, but because this is a species that is occasionally kept in captivity there are often questions of provenance with Black-billed Magpie records in southern Ontario. Quite a few of the Black-billed Magpie records from southern Ontario have been turfed by previous iterations of the Ontario Bird Records Committee, though I am convinced that several of those rejected records are actually of wild birds - it is just a hard thing to prove either way! I am anticipating a lively discussion about this particular individual at next year's AGM; we shall see.


There are certain rarities that just seem so out of place when they show up. This large black and white bird with white flashes in the wingtips was surreal to see, as it cruised overhead, sometimes at an impressive height. It certainly was a strange sight to see this magpie at Point Pelee, among the Blue Jays that it would occasionally pass near.

After the fun of the magpie experience, I was standing near the south end of Sparrow Field along the road with Sarah and Kory Renaud, their two daughters Emily and Alyssa, Steve Pike and Jeremy Bensette. Kory and I had a brief glimpse of a Mourning Warbler, and while trying to tease it in we both got on a smaller warbler a bit higher in the trees. It was a Cerulean! The views were brief - only two or three minutes elapsed before it vanished - but enough for all of use to be happy with the looks that we had. I snapped off a couple photos as well. This appeared to be an adult female, but I could be wrong.

As I mentioned previously, the birding was really awesome on the Sunday and I rarely had dull stretches along the trail. Nearly everywhere I went, colourful tanagers, Rose-breasted Grosbeaks and various warblers could be found, while all of the expected flycatchers were around as well. All six regular vireos were accounted for, including this Blue-headed Vireo which is starting to get a little late.


Magnolia, Chestnut-sided, Tennessee, Blackburnian and American Redstart were the main warbler flavors of the day, as expected given the date and the relative abundance of the above species. But Bay-breasted Warbler also put in a good showing with 14 tallied; the same number of Canada Warblers were also on my checklist.


I can be a bit of a "robin stroker" at times with really spectacularly coloured birds like Scarlet Tanager. Just can't get enough of them! "Robin stroker" by the way is a British term for an amateur birder that gets overly excited with pretty common birds, like the European Robin. It is definitely applicable here too, and I'm not ashamed to call myself one at times...

Flycatchers were in the park in big numbers, providing an excellent opportunity to study the differences between Yellow-bellied, Least, Alder and Willow Flycatcher, and Eastern Wood-Pewee. All of the regular Ontario flycatchers were accounted for over the course of the afternoon, with the exception being Acadian Flycatcher. Talking with Tim Arthur later, he had a flycatcher clean sweep! If only a Western Kingbird had flown off the tip as well.

Magnolia Warblers are a spectacular species! There is something quite nice about hearing that distinctive, nasal "schep" call while hiking through a dense conifer stand in northern Ontario and seeing a flash of yellow deep in the shadows. On migration they are a little more photogenic as they often forage low down in deciduous vegetation.


When it was all said and done, I finished with 110 species in the park on Sunday. Not anywhere close to any records, and I could have seen quite a few more if I chased a few species. But for a day of wandering around the southern half of the park I was pretty happy with my sightings. This Pelee place, it is kind of alright!

On Monday I slept in a little bit, not making it into the park until sometime after 8. I enjoyed a two hour walk near Northwest Beach, soaking in the last views of Point Pelee for me this spring. I didn't take any bird photos, but I did take a few photos of some common flowers. This one below is Herb-Robert, followed by Wild Blue Phlox.


I have to say this was one of my more enjoyable springs at Point Pelee in recent years as far as the number of birds were concerned. Quite a few of my ~ 13 mornings in the park this spring were very birdy and there were rarely any slow days. Mega-rare birds were in short supply this spring, but there were good numbers of minor rarities to keep things exciting. Of course many good times were had with friends which is part of what makes Point Pelee special. I can't wait to do it again next year!
Posted by Josh Vandermeulen at 18:28

Hi Josh, very nice little blog you have here. Was wondering if you can help though? I am looking to join the Point Pelee Birding WhatsApp group, if possible, as i will be coming over shortly. Can you tell me how i can join please, or who i need to contact?
Thank you, and keep up the great work