With rain forecast throughout the morning once again, Dan Riley and I decided to enter the park on our own, while Laura, mom and dad would be entering the park and meeting us at the Tip an hour later.

We birded the Tip area until my parents and Laura arrived and had a few highlights including six Common Goldeneye offshore, a flyover Lapland Longspur and a cooperative Red-throated Loon at the Tip. Word had spread indicating that a Sedge Wren was working the root system of a partially uprooted tree right at the very Tip, so naturally that was our first destination once everyone had arrived. With a bit of patience it was not too difficult to snag a few decent photos of the wren, a species that is rarely seen out in the open like this. While cold and rainy days can be tough on migrant songbirds, one side benefit to birders is that these birds are often much easier to observe, compared to when they are on their breeding grounds.

We birded the Tip area, walked up the West Beach Footpath, cut across to Sparrow Field, and walked back to the Tram Loop via Loop Woods where we birded with Dave Szmyr and Josh Mandell for a bit. This American Robin was nesting in an extremely visible spot directly beside the trail in Loop Woods. While the birding was a bit slower than the previous morning we kept adding new birds and it did not take long for my parents to reach species #100 for their weekend, establishing their eligibility to receive their 100 species pin. The 100th species was a Northern Waterthrush singing away by the septic field east of the Visitor's Centre which flew past several times, giving us brief views.


We birded the Northwest Beach / Sanctuary area for an hour or so during the late morning, hoping that high numbers of songbirds would still be working the gooseberry in the undergrowth. While numbers were a little lower this time around, the birding was still excellent!


A couple from Quebec pointed out a roosting Common Nighthawk along the bike path north of Northwest Beach, then my dad spotted a different Common Nighthawk a few hundred meters further along the trail - a tough bird to find and a great spot by him!


Ruby-throated Hummingbirds were still present in high numbers and this one even posed for us. If only it had turned its head just a touch more so that the brilliant ruby of the gorget would be visible!


The orange-variant Scarlet Tanager was still hanging around the parking lot at Sleepy Hollow, while we also found a nice pocket of birds that were quite cooperative for photography including several Cape May and Tennessee Warblers.

We walked along the beach back to the Northwest Beach parking lot, which was a good decision since Dan Riley quickly turned up a Five-lined Skink. Walking back to this car, an Olive-sided Flycatcher appeared on a distant snag, its white patches on its rump easily visible given the angle.


As this was the last day for my parents in the Point Pelee circle, we checked out Hillman Marsh for the first time in the afternoon. Their species tally quickly shot up as many of the ducks and shorebirds were new. We weren't able to find any rarities, though we did have amazing scope views of a close Blanding's Turtle and American Bullfrog!


We took the long way back to the car after scanning the shorebird cell,  checking the area where the bird banding occurs, as well as the marsh near the little boardwalk. Two new warbler species appeared - Yellow-rumped and Palm - bringing my parents and Laura up to 21 warbler species. A little better than the 9 from last year! After two days of solid birding, everyone was beginning to feel a little tired... 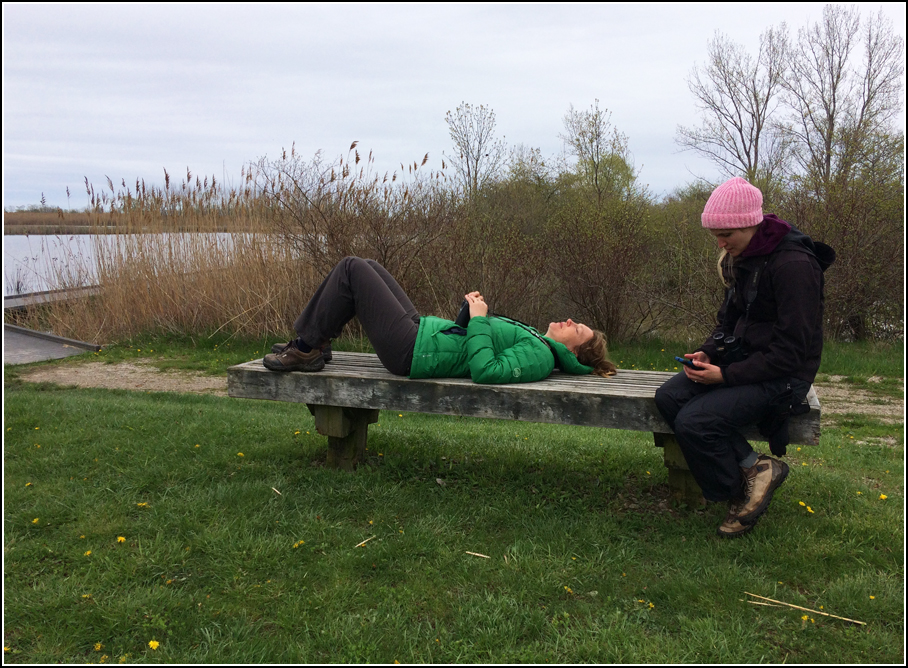 When it was all said and done, my parents finished with 120 species, a very respectable number! More importantly we were able to share time together as a family. This Pelee weekend will undoubtedly go down as one of the highlights of the year for me. I'm grateful to have Laura, my mom and my dad in my life, and I love that I can share my passion with them.


Laura and I said our goodbyes to my parents then headed back into the park for an evening walk as the sun had come out. On the way in, I took a spin through the onion fields, finding a few flocks of shorebirds including my first Short-billed Dowitchers and Ruddy Turnstones of the year, along with a surprise Bobolink on someone's lawn and the default male Ring-necked Pheasant in the usual field off of Mersea Road 19.

We entered the park at around 6:00 PM and headed back to Sleepy Hollow. The sun had come out and it was an absolutely beautiful evening. Our walk was quite birdy too with mostly the same species as we had seen here previously, though a Yellow-throated Vireo was a nice treat as it foraged in the lower levels. Usually this species is way up in the canopy.


Laura and I met up with some friends at the Trading Post for dinner, which was fantastic by the way despite the limited menu. It is run by the same people who run the nearby Birdie's Perch (a.k.a. the Red Bus), and the food quality is just as good! By the time we returned to the Riley's cottage our eyelids were heavy and we only lasted an hour or so until it was time to go to bed.

Laura and I slept in on Monday morning, our last at Point Pelee, as we had been burning the candle on both ends over the previous few days. We avoided the Tip, instead enjoying a leisurely walk together along the Woodland Nature Trail and Redbud Footpath. Our main goal was to catch up with the male Prothonotary Warbler which had been seen occasionally at Bridge F, and which would be a lifer for Laura. The sun was intermittently shining - a nice contrast to the previous two mornings - and the trails were quite birdy.


We spotted a White-eyed Vireo just west of Bridge F, while a Black-billed Cuckoo also appeared down low in the shrubbery. The Prothonotary could be heard singing as we approached Bridge F, and eventually appropriate views were had of the Swamp Candle.


Laura spotted a Green Heron in one of the sloughs along the Woodland Nature Trail, while we also found a few Philadelphia Vireos, a Blue-headed Vireo and a Yellow-throated Vireo, giving us a six-vireo hour (not sure if I've ever done that before!). We soon decided to call it a day as we had a long drive ahead of us. It had been a great weekend; hopefully a tradition we can continue in future years!
Posted by Josh Vandermeulen at 11:18