I had read of a ranger station near the Papallacta hot springs where two rare species - the Masked Mountain-Tanager and Black-backed Bush Tanager - could be located in the nearby elfin forest. I believe this was near the area where there a Crescent-faced Antpitta could also be lured in with tapes (although apparently it has been "taped out" and is very difficult now). Unfortunately by the time we arrived in the town of Papallacta the clouds had descended; or rather, we had ascended into the clouds. A sideways mist was blowing and the conditions were a little less than ideal. We had some issues finding the exact access road and started getting a little frustrated.  We passed by the Jamanco hot springs and decided on a whim to go for a soak.

This was a supremely good idea. The hot springs were amazing and it was great to chat with some of the locals as well! All the while, the fog thickened and mist intensified.

Once we finished at the hot springs we decided that we might as well head back to the Polylepis patch near the Papallacta Pass to look for the Giant Conebills again. Rain or not, I was going to give it my best shot!


In a stroke of good fortune we left most of the clouds behind us as we inched close to 4,000 m in elevation. By the time I had stopped at the Polylepis patch the mist had completely stopped and the sun even peeked out for a few minutes at a time.


Laura decided to have a nap in the car while I did a quick check of the Polylepis forest. This time I birded the much larger patch, located east of the first patch that we explored during the previous afternoon.  Bird activity was much better and I quickly noted Tawny Antpitta, Paramo Tapaculo and a Brown-backed Chat Tyrant.

A little while later some chip notes drew my attention. I followed the source of the sounds and was soon situated at the edge of a small mixed flock of birds. My attention was on high alert. This was the domain of the Giant Conebill after all, an enigmatic and charismatic species found at low densities and only in these high elevation Polylepis forests.


White-throated Tyrannulets and Pearled Treerunners were the major players in this mixed flock with smaller contributions by Cinereous Conebills and Spectacled Redstarts. Some movement down low drew my attention to a few skulkers which materialized into Black-backed Bush Tangers. Awesome! A few quick "record shots" and then they were gone.


And then it happened. Some movement on a moss-covered branch above me caused me to instinctively raise my bins. Obscenities were whispered so as to not scare the bird. It was actually a Giant Conebill!!


Hands shaking, I fired off a number of photos and then reached back for my binoculars. Over the next two minutes I followed the nuthatch doppelgänger around, watching it quietly forage in the branches of the Polylepis.

By the time I had hiked back to the car the sun was shining and the clouds were rolling down the mountain side away from us. We completed the short drive to the Papallacta Pass where the sun was shining high in the sky with just a few lingering clouds remaining. This is absolutely unheard of here; they say that the Papallacta Pass is a good place to visit if you like sideways rain.


Laura and I walked along a gravel road that runs parallel to the highway (above) in hopes of spotting a Red-rumped Bush-Tyrant or Ecaudorian Hillstar. Unfortunately the hillstar's preferred flowers were not blooming and the bush-tyrant did not want to play ball either. Several Carunculated Caracaras flew overhead and we enjoyed great views of a few Chestnut-winged Cinclodes and Plumbeous Sierra-Finches.

It was now around 2:00 PM and we had one more major target bird to search for. The Rufous-bellied Seedsnipe is one of four species of seedsnipes, all found throughout the Andes. While most closely related to shorebirds, seedsnipes seem to fill the ecological niche that ptarmigans fill in the northern hemisphere. The Rufous-bellied is limited to extremely high elevations with minimal vegetation in the Andes. An isolated population occurs in the highlands of Ecuador, while the rest of them are found from Central Peru south to Patagonia. This species is extremely sensitive to human disturbance, adding to its allure and difficulty. A set of radio towers in the Cayambe-Coca reserve near the Papallacta Pass is the most reliable place to see this species in Ecuador. However, it is a species easily missed by birders, often due to the effects of inclement weather and heavy fog.

We stopped at the entrance gate to the Cayambe-Coca Ecological Reserve and were pleasantly surprised to find out that we did not have to pay admission. The only problem was that the park would be closing at 5:00 PM, giving us a short window of about two hours to bird the park while still giving us a buffer to get out before they closed the gate.

I have to say, the scenery here was incredible!


We stopped at a hillside where Ecuadorian Hillstars are often seen. That is, if their favourite shrubs with orange flowers are blooming. We were in luck and enjoyed great scope views of four of them. The Ecuadorian Hillstar is practically an Ecuador endemic, though it also ranges to extreme south Colombia.


We soon found a few more high-elevation specialties including our first Stout-billed Cinclodes and Plain-capped Ground-Tyrants.

We inched higher and higher into the reserve and by the time we reached the radio towers my phone was telling me that we were at an elevation of over 4,350 m.

We pulled up to the radio towers and I quickly checked the message on my phone from Mark Dorriesfield, detailing where he had seen the seedsnipes on his earlier visit here. I glanced up and there, sitting on the road in front of us, was a Rufous-bellied Seedsnipe!


I was stunned by our luck. We watched the seedsnipe do her thing, foraging for (you guessed it) seeds among the edge of the road.


She casually kept an eye on us and wandering around the back side of the building. With a little bit of patience it wasn't too difficult to acquire reasonable photos. What incredible detailing to her feathers.


Laura and I were thrilled with the fruits of our labor. With the main targets out of the way we took some extra time for sight-seeing. It is rare that one can have complete panoramic views of the surrounding mountains here. 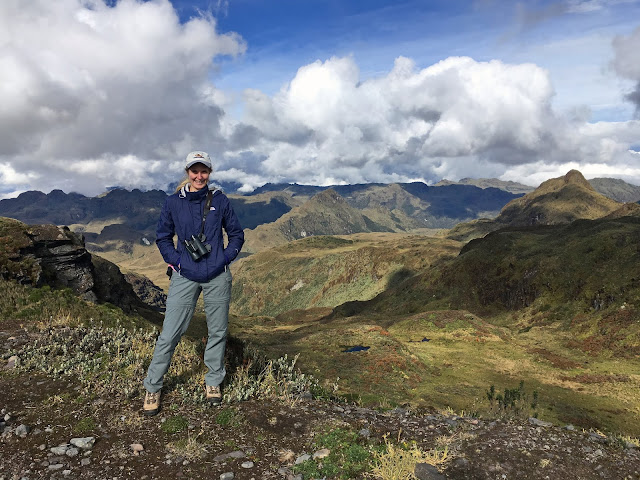 Antisana (a volcano reaching over 5,700 in elevation) is normally obscured by fog and clouds, but it too was cresting through a cloud and looming over the rest of the landscape.


We stopped a couple additional times while coming back down from the radio towers. Many of the same birds were seen but we also added Paramo Pipit, Brown-bellied Swallow and Andean Tit-Spinetail. An Andean Condor silently cruised overhead.


Upon exiting back through the gate and signing out with the staff, we began making our way back west along the gravel road that runs parallel to the highway. I held out hope that a Red-rumped Bush-Tyrant would appear but alas, we had used up all of our luck for the day.

That evening we returned our rental car and grabbed a ride over to the airport hotel we had used previously. The "self-guided" portion of our quick Ecuador trip was over since in the morning we would be flying to Coca and from there, meeting the staff from Sani Lodge who would transport us into the Amazon.