At breakfast Laura and I were met with great news - Guillermo (Gustavo's uncle who was one of the birding guides) had arrived! While it had been a few days coming, at least Sani Lodge had pulled through and had arranged for him to guide us for the day. This was especially fortuitous since we were planning on birding a few of the Amazonian River islands. Having an expert guide who knew the best locations for our target species would be especially helpful here! In the murky pre-dawn darkness, the five of us set off by canoe back towards the main river as the first sounds of the morning began. Within seconds, Guillermo's skill became apparent as he identified vocalizing Sunbittern, Amazonian Barred-Woodcreeper, Black-banded Woodpecker, and several others as we paddled along.

We got off the canoe, walked along the long boardwalk that led to the river (picking up our first White-shouldered Antbird by voice along the way) and hopped in a long canoe with an outboard motor, similar to the boat that we arrived in, to visit some of the river islands. Rain threatened all morning but other than occasional showers we lucked out and had a very productive day of birding! 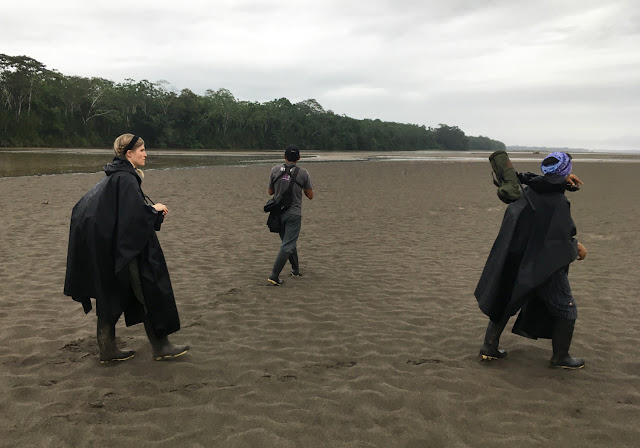 River islands in the Amazonian lowlands provide an ephemeral habitat type that changes over the years and that is attractive to different guilds of species compared to the surrounding varzea and terra firme forest. The shifting sands that wash into the various tributaries that feed the Amazon can shift dramatically depending on the currents. Sandy islands can take shape, and if enough time passes, early successional plants can take root. First to colonize are various grasses, sedges and other herbaceous species, followed eventually by shrubs and cecropias. If enough time passes before the island gets washed away, mature forest can eventually form. At each stage of succession different birds will also colonize the islands. Many of these species are endemic to river islands throughout the Amazon. These were our main targets for the day.

By 6:50 AM we had arrived at our first island and were met by several Amazonian Umbrellabirds flying overhead the river with some of them landing in tall Cecropia trees on the island. The “umbrella” on these individuals was difficult to see in flight, and most of them were females but we did see a couple of males perched distantly. A pretty cool cotinga!


Our first Chestnut-eared Aracaris also teed up in the Cecropias.

Our first island provided a bit of an avian overload and I had reached double digits in “lifers” for the day before we had even hit 8:00 AM! Many of these were common Amazonian species that thrive in this successional habitat such as Magpie Tanager and Yellow-browed Sparrow, while others were some of my hoped for river island specialities, including Lesser Wagtail-Tyrant and Olive-spotted Hummingbird.  The Olive-spotted Hummingbird was one of my main targets, since what it lacks in beauty it makes up for in scarcity (I apologize in advance for the terrible photos).


I tried hard using playback for several species of spinetails but largely struck out. I did hear a Dark-breasted Spinetail but the much hoped for specialities, Parker's Spinetail and White-bellied Spinetail, refused to show or produce so much as a peep of sound. Can't get them all!

It was soon time to move on to the next island. Sergio had gone back to fetch the boat and he picked us up on the far side of the island. On our way to the next island we cruised slowly along the shore of the Rio Napo to try to pick up additional birds. We were in luck with a White-bearded Hermit and two Drab Water-Tyrants; both were new species for Laura and I. I remember when I was in Colombia five years ago someone told me that the local birders referred to this species as the "Champagne-breasted River Jewel", to make it sound a little more fancy!

The next island on the agenda was one which was home to a rare species called the Castelnau's Antshrike and several other species. The vegetation was a bit more mature than the previous island.

As we pulled up some distant herons came into view, some of which were a striking pink color. Roseate Spoonbills!


Roseate Spoonbills are one of the celebrated birds of the region and a species that is only present in small numbers. But I was more interested in scanning for a particular species of plover that is known to nest on river islands. Collared Plover is a species that had eluded me on all my previous trips to the Neotropics but this time we were in luck - a pair was patrolling a stretch of beach!


Our foray into the depths of this island was successful since we soon heard our target species - a Castelnau's Antshrike. 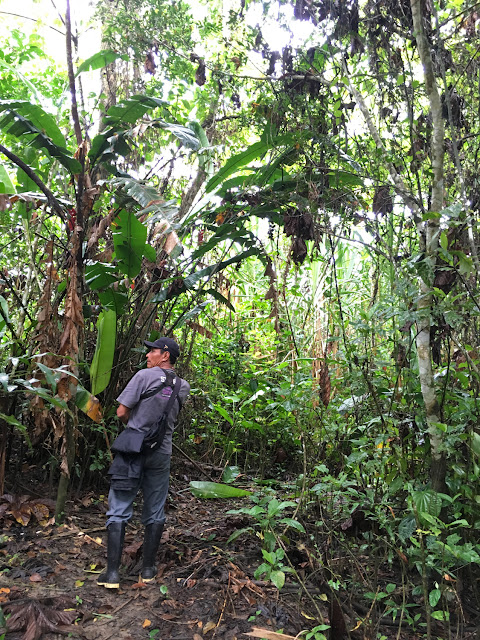 It took some patience but we eventually had quick glimpses of two individuals. Then it happened - one of them flew fairly close to us and was fully visible through a narrow window through the vegetation. An awesome look at a rare river-island specialist.


This butterfly was found in the same area. It is a Nauplius Crescent, which is an Amazonian species that prefers river edges.


We walked around the island for a little while longer to search for a few additional bird species without any luck. However, a curious insect on the shoreline drew our attention. This is a species of mole cricket called Scapteriscus oxydactylus that lives in the sandy banks of the river island. The large forelimbs make an excellent shovel, and an individual can disappear completely in under a minute by burrowing into the sand.


Our stomachs had begun growling and so we made our way back to the canoe to enjoy a sandwich and some juice which the guides had packed. It hit the spot perfectly and we soon cruised back to the shoreline of the Rio Napo. We had recorded 72 species in the three and a half hours on the river islands; a pretty good total, thanks to Guillermo.


The plan for the remaining hours before lunchtime was to bird some secondary forest near the indigenous community of Sani Isla, which was the home of our indigenous guides. Guillermo knew the area well and so we set off down a muddy trail. We were all very glad that we were wearing the rubber boots provided by the lodge. 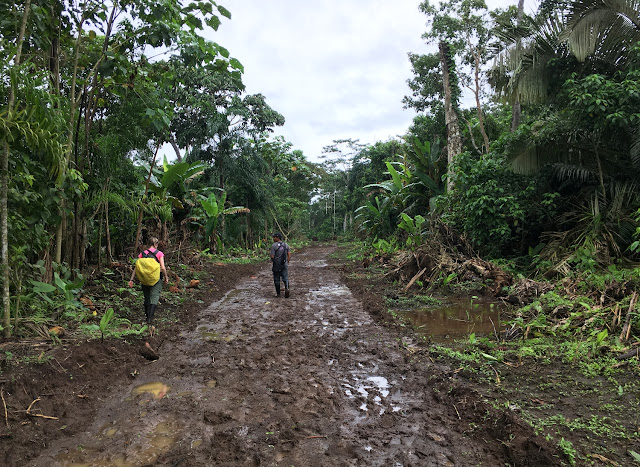 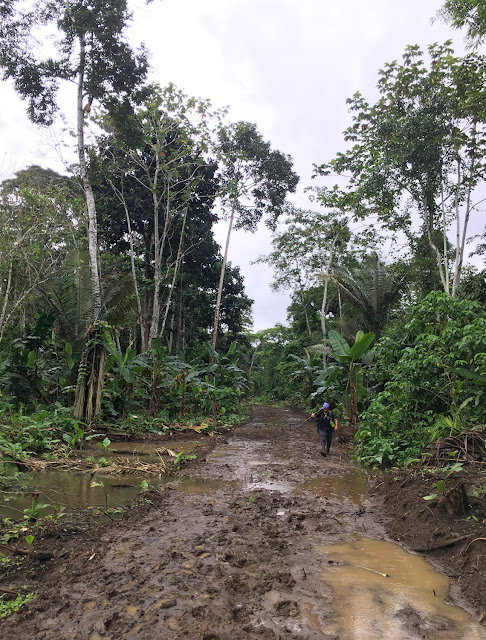 As this was my first time birding secondary habitats in the Amazonian lowlands, many birds that we came across were new. It was overwhelming once again, in part due to Guillermo's expertise both with every sound that we heard, and with every backlit species seen at the tip of a Cecropia.


Our sixth monkey species in the Amazonian lowlands appeared in a tree close to the muddy tract - a very cute White-tailed Titi.


Guillermo had one more treat in store for us before lunch. He brought us to a location near to his house where Crested Owls roost regularly. They were right where they were supposed to be, glaring back at us as I snapped a few photos. What an awesome species to see so well.

With a highly successful morning in the books, we enjoyed a late lunch in the community of Isla Sani. But we had hardly sat down when some excited calling from Guillermo got our attention. He had found some Pygmy Marmosets at the edge of the clearing!

Laura and I rushed over, camera, scope and bins in hand. The marmorets were a lot of fun to watch as they hunted for insects amongst the foliage. These are among the smallest monkey species on earth!


We devoured our lunch in record time since we had done a ton of walking to this point in the day. Laura and I were climbing into the boat that would take us back along the river when we heard someone yell out "serpiente!". Of course that got our attention. What happened next was a little bit crazy.

One of the local guys at the docks had put his arm on a railing only to notice this viper, which proceeded to climb up his arm. He thought the snake was harmless and tried to tell me that, but it was clear to me that this was one of the arboreal vipers (a Green Jaracara - Bothrops bilineatus). I frantically was able to convince him that this snake was quite venomous and he put it back down on the ground after a few minutes, though he seemed quite chill about the whole experience! I took a few photos of the pretty little viper, then removed it from the docks and safely placed it in some nearby trees, with the help of a couple of branches. 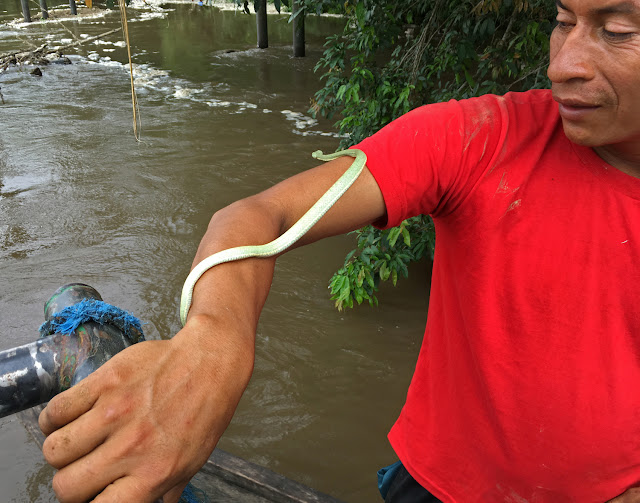 
With a very succesful morning day in the books we headed back to the lodge for a well-deserved rest. That evening we went for one more paddle in some flooded forest near the lodge in hopes of picking up a few more species. The route we took hadn't been traversed in a while and the water levels were a little low; on a few occasions we all had to get out to push the boat through as well as use the machetes to clear a path. 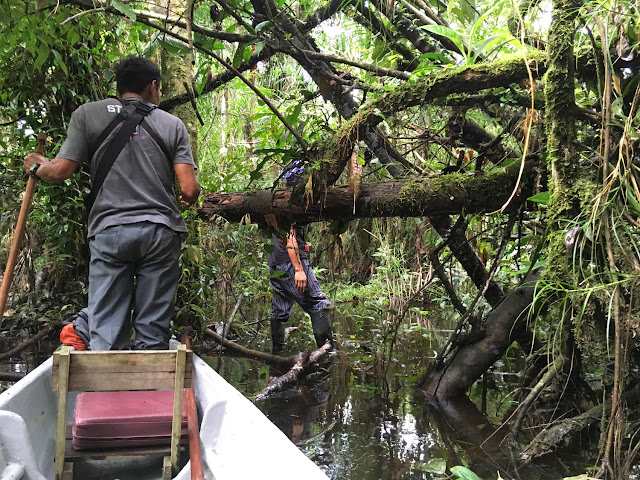 One final new bird species was in store for us - a Scale-breasted Woodpecker - putting a nice cap on an excellent day. When it was all said and done we had recorded 160 species of birds, 29 of which were new for me (easily my highest single day total).


While watching the sun set - the last time for us in the Amazonian lowlands - we enjoyed observing the local Black Caiman named Mama Lucy that patrols the area near the docks.

The mosquitoes were feasting on her - at least 40 are pictured in this photograph; all quite engorged with blood.

That evening we went on our final night hike, but I will touch on that in the next post.

Posted by Josh Vandermeulen at 19:38