Boquete is a town set on the eastern flank of Volcán Barú, at an elevation of roughly 1200 masl. It is situated along the Río Caldera, surrounded by productive coffee plantations and above them, montane forest. Boquete has become a sort of haven for retirees from North America and Europe. Approximately 14% of its 19,000 residents are of foreign origin, according to Wikipedia. It also attracts backpackers and other tourists who wish to get their fix of ziplining, jungle trekking, coffee/chocolate tours, river rafting and similar activities.

Laura and I booked three nights each in Boquete and Cerro Punta, which is a small town on the opposite, northwestern flank of Volcán Barú. We enjoyed our stay in both places, in no small part due to the excellent accommodations that Laura found online in each town, and due to the abundant bird life in the nearby hills.

One benefit of traveling at this current time, as tourism is finally reopening in Panama, is the relative lack of crowds in typical tourist locations. Laura and I enjoyed our time in Boquete and went on several nice hikes. But we could envision that in typical times, the area would probably be a little overrun with tourists. In hindsight we should have booked two nights in Boquete and 4 nights in Cerro Punta since we absolutely loved the latter locale, but we still managed to have a great time in Boquete, regardless.

One word of caution - the roads are quite steep in Boquete... 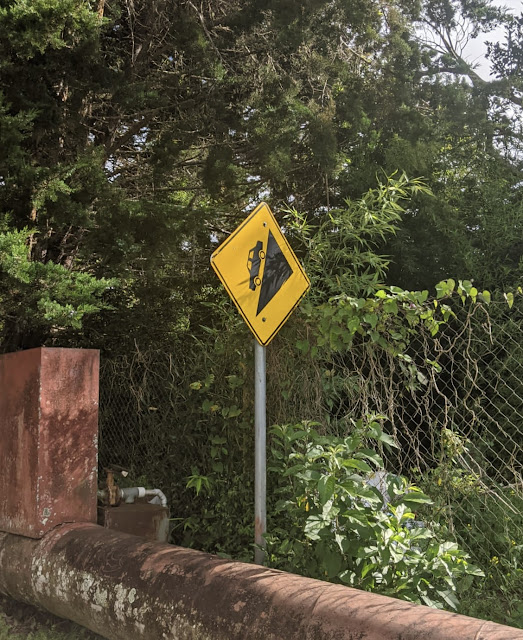 Laura and I reached out to a couple of local guides to inquire about arranging a trip up to the rim of Volcán Barú since it is easier reached from the Boquete side. This is a great way to search for some of the high-elevation birds including Timberline Wren, Volcano Junco and Unspotted Saw-whet Owl. The road is quite rough and a specialized high-clearance 4WD truck is necessary. Unfortunately, Jason Lara (who is a highly regarded local guide) was busy during the days we had available, while another local guide, Raul, did not respond to my messages. In hindsight, we should have tried to arrange something more than a couple of days in advance. Laura and I have seen Timberline Wren and Volcano Junco previously in Costa Rica, while I had connected with Unspotted Saw-whet Owl in Guatemala, but a Volcán Barú trip would have been a cool experience (and the lister in me would have liked those birds for my Panama list!).

During our first afternoon in Boquete we walked up the gravel road that leads to the rim of Volcán Barú, since we needed to kill a few hours before checking in to our AirBnB property. The guard at the gate turned us back, informing us that we needed to obtain permission via email from the national park to walk the road. We said that we only wanted to walk a little bit up the road to look for birds (we were certainly not planning on hiking the 14km to the summit!), but he would not budge. At least we managed to see a few Acorn Woodpeckers and some other common montane birds in the area, while we lucked into eye-level views of a female Cerulean Warbler from the car on the drive back,

As dusk fell, I set up the bug light in the backyard. The temperatures were a little cool at this elevation, while a strong wind whipped past all evening, but by weighing down the sheet I had some success with a few moths and other insects. 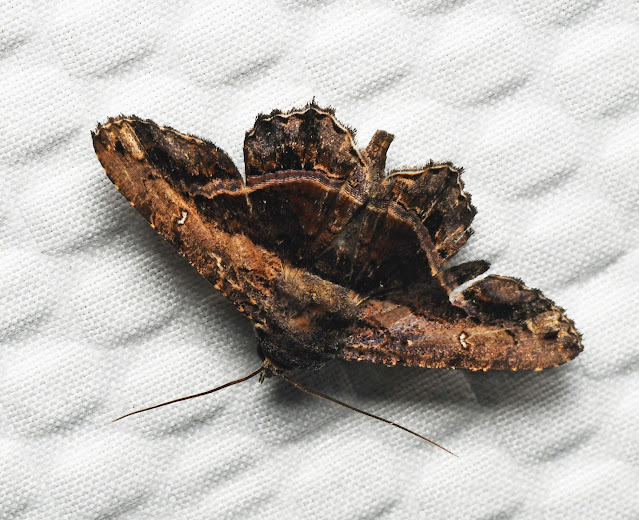 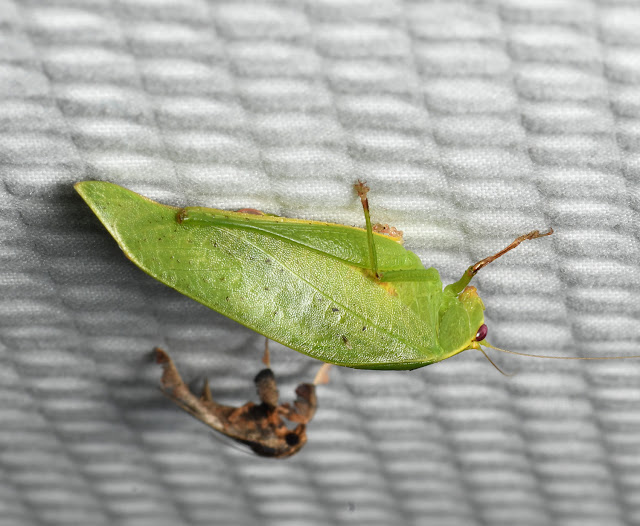 The mothing was certainly a lot less productive than our attempts had been at Canopy Tower a week earlier. None of the big flashy (or even little flashy) species appeared, but nearly everything was still something that we had never seen before. 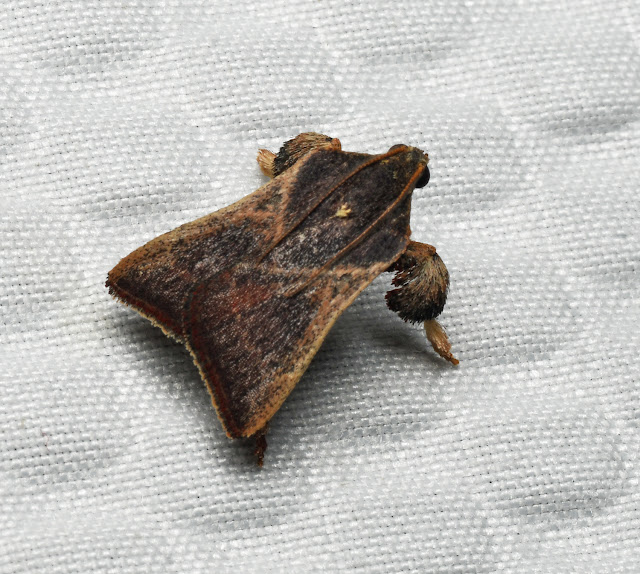 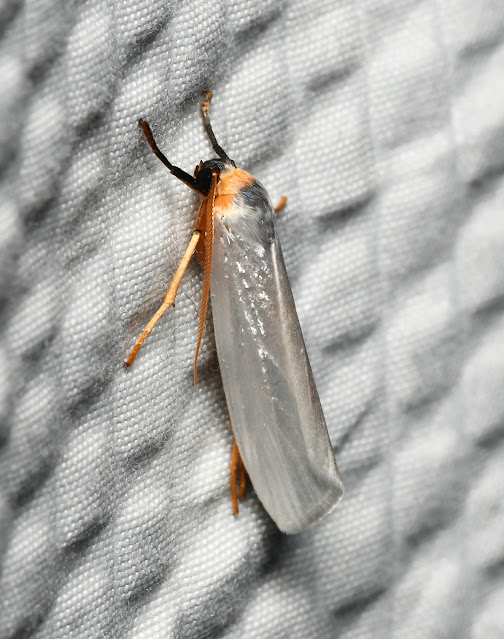 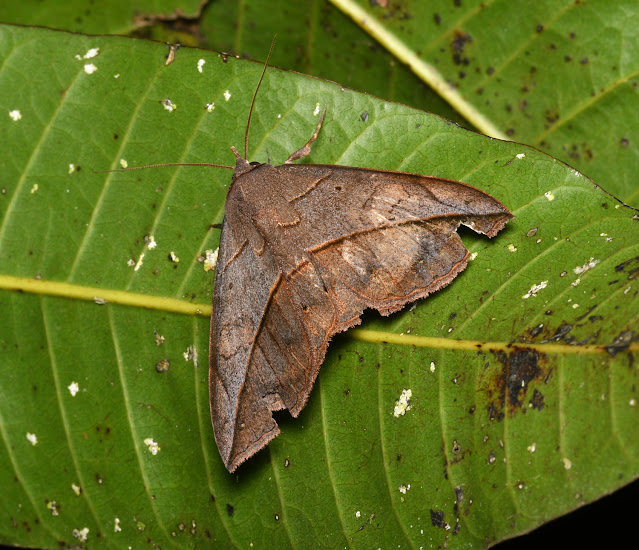 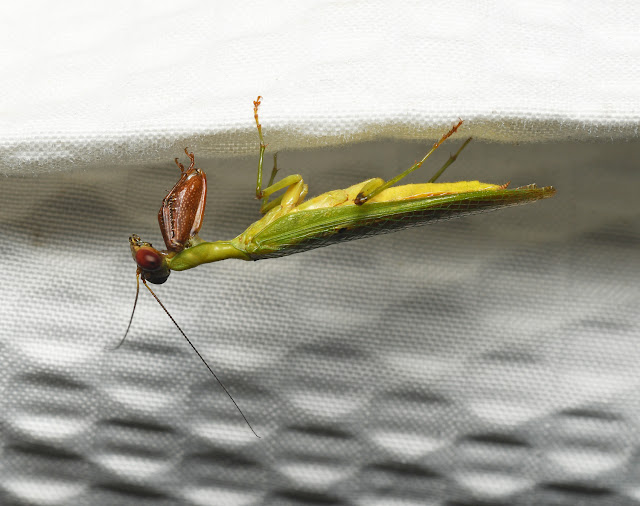 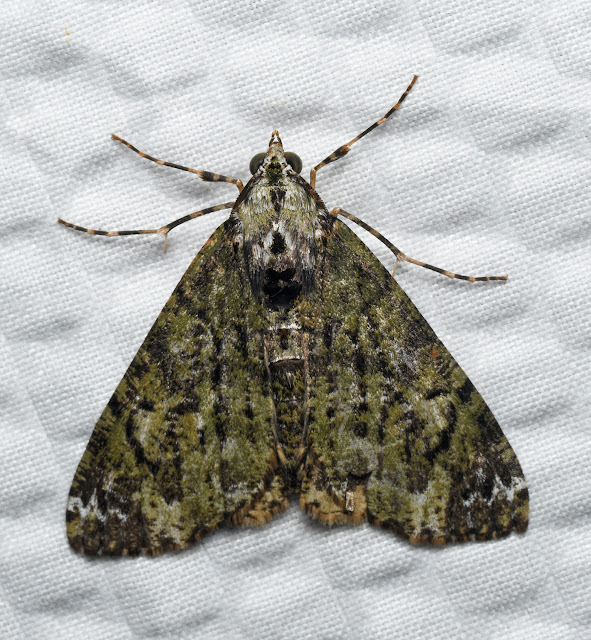 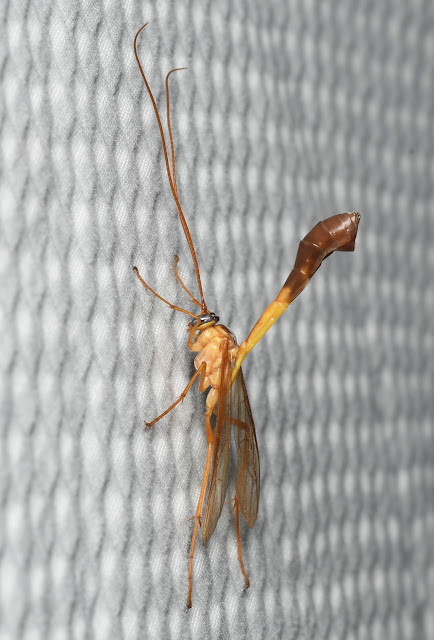 Laura and I visited the Pipeline Trail for our first morning in Boquete. This is, of course, not to be confused with Pipeline Road/Trail near Gamboa where we had spent so much time earlier in the trip.

We would have liked to have walked the Sendero Los Quetzales - a spectacular trail that cuts across pristine montane forest all the way to Cerro Punta on the other side - but, as we had earlier discovered, the trail was closed for maintenance.

The Waterfall Trail is a there and back again trail, and at only ~2.5 kilometres in length (each way), it can be hiked in relatively short order. Birders, of course, are a different breed. If mixed flocks are present, one could easily spend the whole morning (and then some) at the Waterfall Trail. It begins at an elevation of roughly 1580 masl, follows the river and passes through a landscape of small agriculture plots and woodland for the first stretch. Eventually it leaves the farmland behind, entering mature forest filled with majestic oaks, elms, and other ancient trees. The trail terminates at the waterfall – a high one, but with only a modest amount of water - that if I recall was around 1830 masl at the bottom.

The birding was pretty active in the lower stretches of the trail. This is not surprising given the mixed land uses here. While mature forest holds a much greater diversity of species, the human-altered habitats give up their species much more easily in a brief visit. Among others, we noted Gray-crowned Yellowthroat, Flame-colored Tanager, Louisiana Waterthrush and White-naped Brushfinch, while hummingbirds were well-represented with Talamanca and Scintillant, Violet Sabrewing, White-tailed Emerald and more.

A small Empidonax flycatcher caught our attention due to its prominent eye-ring; after a few photos it disappeared and we were distracted by something else. Least Flycatcher has only been recorded a handful of times in Panama. This bird had primaries that seemed a little long for that species; unfortunately, I don’t have any other photos to go on. A tricky one…

We could not visit Boquete and not see a Resplendent Quetzal. After all, about half of all of the restaurants, lodgings, and tourist outfits are named after this bird. While we did not see any males at the Waterfall Trail, we tracked down a female behind the famous Mexican Elm, a massive tree with a sign proclaiming its age as 1000 years. I am not sure if this is legend or if there is some truth to it, but it is a truly awesome specimen.

Three of the most common species that Laura and I have seen on this trip are all very familiar from back home: Red-eyed Vireo, Eastern Wood-Pewee and Swainson’s Thrush. All three have annoyed us at various points due to their abundance; this Red-eyed Vireo must have caught me on a good day since I decided to take its picture.

The bird diversity changed as we entered the forest. A couple of mixed flocks provided some entertainment, producing species such as Yellowish Flycatcher, Spotted Barbtail, Eye-ringed Flatbill, Red-faced Spinetail, Brown-capped Vireo and both Black-cheeked and Golden-crowned Warbler.

As we neared the waterfall, the fluted notes of Black-faced Solitaires lifted from the gargantuan trees. Birding was a little slow as mixed flocks did not materialize. But I was content to just gaze at the magnificent forest. We basically had the entire place to ourselves as well, crossing paths with only two solo hikers during the morning.

I noticed an anole near the base of a tree, and the kid in me ensured that I attempted to catch it. I have since identified it as Anolis magnaphallus (West Panamanian Anole). It has a limited geographic range in the highlands of western Panama.

For our second full day in Boquete, we visited a location called Las Tres Cascadas (The Three Waterfalls), often known as The Lost Waterfalls. This is a classic tourist attraction in Boquete and I figured it would not necessarily be a birding morning when we decided to visit here. But I was pleasantly surprised. The birding and naturalizing was actually quite good, especially in the first hour or two of our visit before the weekend crowds appeared.

The entrance fee is a little steep (8 USD per person), but the three waterfalls are beautiful and a fair amount of trail maintenance is required due to the frequent rainfall and tough topography. As one might surmise, the trail leads to three waterfalls spaced apart along a small river. The first section of trail passes by a couple of small fincas and disturbed habitat, before transitioning to high quality forest just before the first waterfall. The rest of the trail cuts up the heavily forested hillside, leading to the final two waterfalls.

As we crossed the river via a small bridge near the beginning of the trail, I remarked that the setting looked excellent for American Dippers. Right on cue, one popped up beside us!

In the lower sections of the trail we noted a few nice species, including Scintillant Hummingbird, Prong-billed Barbet and various warblers. The barbets ended up being quite frequent on this day; we heard several pairs of duetting birds throughout the morning and encountered others along the trail.

We chanced upon a huge mixed flock as we rounded a bend just before the second waterfall. It started with a few Collared Redstarts and Black-cheeked Warblers. Sensing that there could be more interesting things with them, I played the tape of the Costa Rican Pygmy-Owl. Pandemonium ensued.

Spot-crowned Woodcreepers and Ruddy Treerunners flew in. Warblers of various species chattered from all around, while White-throated Mountain-gems and Green Hermits hovered beside us to see where the offending owl was located. A Barred Becard popped up, one of several new trip birds in the massive flock.  Mixed flock birding is the best.

The other highlight occurred not long afterwards., with the chip notes of the mixed flock still faintly ringing in our ears. As we rounded a bend, a suspicious furnariid flew into a dense tangle nearby. Could it be?
I played a short snippet of the bird's call, and it popped up out of the thicket to confirm my suspicions. A Streak-breasted Treehunter!
This was one of the few birds endemic to the Talamancan Range that I had never seen, and it can be a tricky species in some areas. Not only did we enjoy great looks of it, but it remained in the area for a while, causing us to finally walk away while the bird was still in view. Ovenbirds such as treehunters can be difficult to observe due to their secretive habitats, so we were thrilled to see this one as well as we did. It ended up winning the coveted Bird Of The Day award from both Laura and I.

By the time that we had reached the ultimate waterfall, the weekend crowds started to appear. We slowly retraced our steps back down towards the entrance, dodging groups of youths who were blasting music as they walked to drown out the sounds of the forest. (Yes, I am a grumpy old man, how could you tell?)

We added a few more birds on the walk back down, including Philadelphia Vireo and Spangle-cheeked Tanager. We also called in a Silvery-fronted Tapaculo and enjoyed (relatively) good views of it, though I was unable to obtain any photos once again. Tapaculos are tough.

One of the last species I photographed was a pair of Prong-billed Barbets near the bottom of the trail.

Our time in Boquete was done. My next post will document our time in Cerro Punta on the northwestern flank of Volcán Barú.

Posted by Josh Vandermeulen at 18:44