Laura and I returned to Pipeline Road for another crack at it. We had a relatively late start to the morning but by 7:30 we had parked the Hawk Eagle Truck at the gate and began our hike.

The birding was pretty slow for the first couple of hours with no mixed flocks and low numbers of birds seen. Of course, quite a few species were calling so the eBird list was still respectable. One of the bird species we did observe well was Black-faced Antthrush. This is a common species in this region of Panama but it was one that I had never photographed before. While I didn’t steal this one’s soul, at least I somewhat captured its likeness.

Whenever the birds are not cooperating we tend to focus more on insects. Below, a cross-section of the morning’s haul. 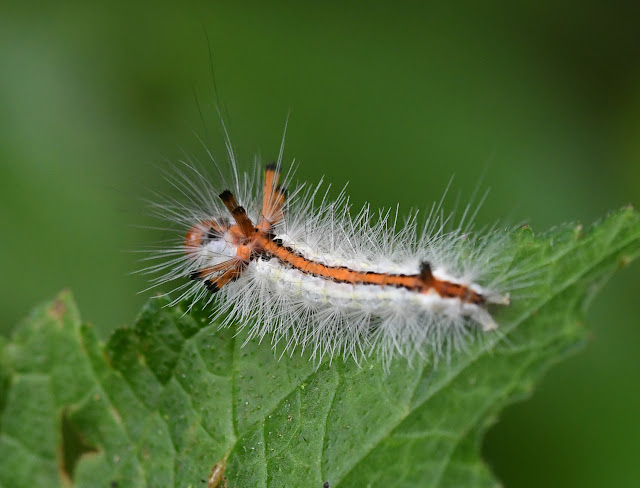 An auditory highlight included a vocalizing Collared Forest-Falcon near the Río Frijoles bridge. But try as we might, it remained on our eBird checklists as heard-only. Around this time we also heard two Semiplumbeous Hawks calling back and forth. A new one for my Panama list, though one I would prefer to see here! We passed one of the guides for Canopy Tower with his client and informed him of the forest-falcon, a potential lifer for the client. We found out later that they were able to enjoy great views of it.

Shortly after the raptors, we came across a decent-sized mixed flock containing a Lineated Woodpecker, various ant-things, Plain Xenops, Scarlet-rumped Caciques, warblers, flycatchers and more. A flash of electric blue caught my eye, and I soon confirmed the suspicions: a male Blue Cotinga! This was one species that we had expected to run into but had not to this point. The colours on this bird are just out of this world! Unfortunately, it remained high in the canopy so this was the best I could manage.

Our only White-throated Capuchins of the trip so far made an appearance.

I was not sure what type of insect larvae this was, but thanks to some help on iNaturalist I now know that it is a type of owlfly. Neat!

We finished up our walk with around 70 species, not a terrible total considering we had missed the best hour and a half of the morning. But after wandering around in the heat and 130% humidity, we were very ready for the air conditioning of our rental apartment.

I did not leave one of the lounge chairs for several hours, editing photos and sound recordings. Occasionally, I would be interrupted by frantic activity in the fruiting tree in the backyard. Perhaps it was a new becard for the yard list, a particularly photogenic Red-lored Parrot, a baby Buff-throated Saltator begging for food from its parent, or a scampering Variegated Squirrel.

We headed back to the Ammo Ponds for the final 45 minutes before sunset. A Bat Falcon buzzed by, several big flocks of egrets headed up the Panama Canal towards their roost, and we finally scoped one of the resident Yellow-tailed Orioles. But even better, the White-throated Crakes appeared. Turns out that they have a physical body, and are not just a sound heard in the marsh! My photos are not great, though, given the distance and low light. We even found an adult with several black floofs (its babies) in tow, but I blew those photos.

As night fell, Laura and I headed back to Semaphore Hill, the entrance road for the Canopy Tower. We had had so much success here previously that we wanted to give it another go.

We parked at the Plantation Road trailhead and began walking up Semaphore Hill as a light rain fell. The frogs and toads sure didn’t mind!

This Forest Toad was pretending to be a treefrog, I think.

I love a good tarantula, and this one fit the bill. Unfortunately, it scampered down its hidey-hole before I could scoop it up for a closer look.

It was just a one-snake-night this evening. But in the tropics, where they can be hard to come by, I will take that. Considering that our night-hikes have lasted only 1 or 2 hours in duration, we had done very well with snakes up to this point, anyways! Laura spotted this one from a bridge that passed over a small creek. It is a Barred Forest Racer (Dendrophidion percarinatum) resting on the top of a palm frond.

Laura spotted this Spotted Antbird catching some shut-eye. We took a quick photo and left it in peace.

Below are a few more of the night’s highlights. 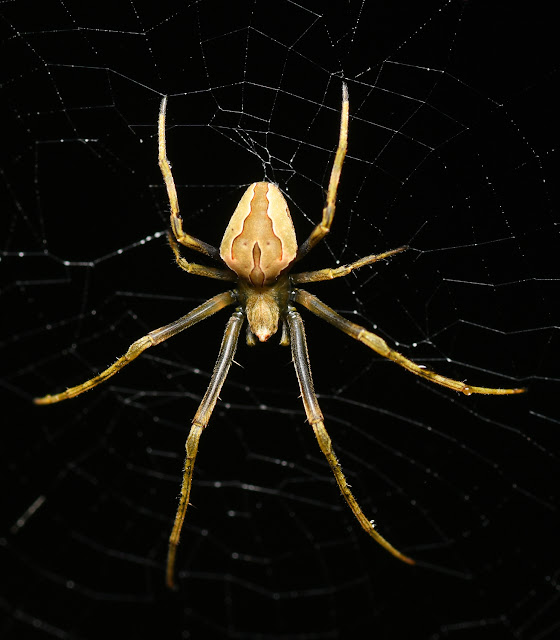 Check out the ovipositor on this katydid! 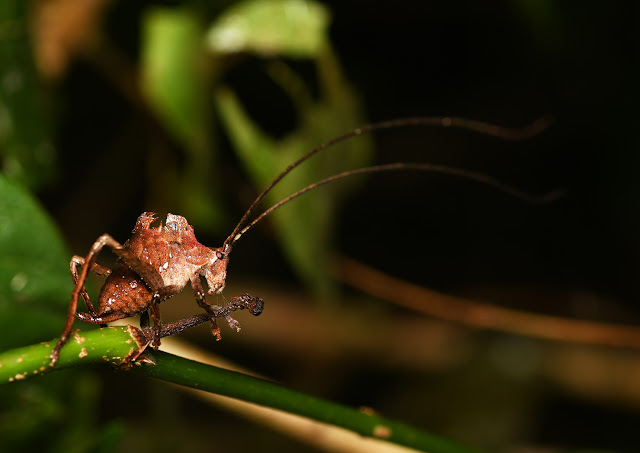 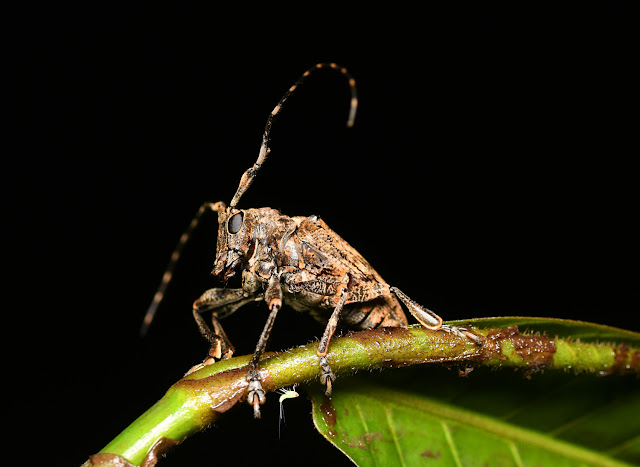 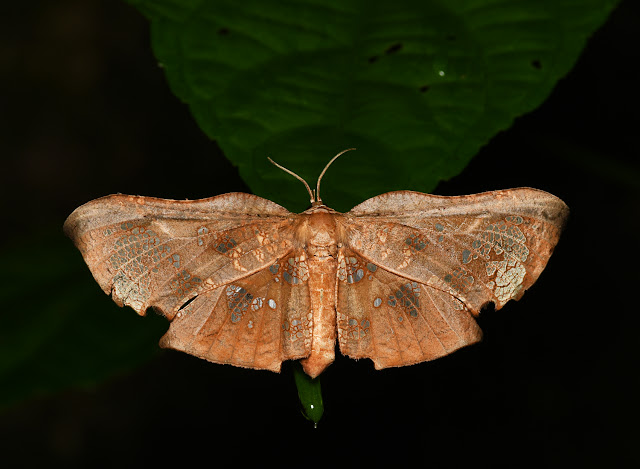 It was tough pulling ourselves away from Semaphore Hill after a couple of hours, but sleep was very much necessary by this point. The eternal struggle of maximizing morning birding and night hiking…

With our last morning in the Gamboa area, Laura and I drove over to – you guessed it – Pipeline Road.

Our “rarest” bird was a Veery, hanging out with one of the millions of Swainson’s Thrushes that have infiltrated the area. Veery is a fairly uncommon migrant through this region of Panama.

More exciting was a Speckled Mourner that graced us with its presence in the same mixed flock. We had heard a Specked Mourner a few days earlier at the Canopy Tower, but this was so much better! It was actually the first time that I had laid eyes on (and thus, photographed) this species.

A little later we saw another Veery in a different spot. Perhaps not so rare after all? I have to say, birding during the peak of autumn migration in Panama has been a lot of fun and a novel experience. So many birds that breed in North America squeeze through the isthmus of Panama each spring and fall. As I write this two weeks later, the number and variety of migrants we have experienced has been quite good!

Below are a few obligatory butterfly photos from our final morning at Pipeline Road.

I spotted a snake in some trail-side vegetation on our walk back to the entrance. It never did allow good photos, but I think it is a Mastigodryas of some kind.

One of our last birds was a Gray-chested Dove that actually landed and perched in full view. Typically, sightings of this species are of individuals blasting across the trail and vanishing.

We reached the Hawk Eagle Truck and tore into our well-earned sandwiches and fruit. The truck’s AC was very welcome as we drove to our next destination: the Gamboa Rainforest Resort.

We navigated around to the back of the complex and down to the marina to park our truck. Unfortunately, the whole community seemed to be in disarray, with many of the houses apparently unoccupied and some in various states of decomposition. But the birding was great, even during the stifling midday heat. We scoped a young Snail Kite at the marina while various swallows flitted around and Lesser Kiskadees perched near the water.

A mixed flock just up the road from the marina produced my first Black-tailed Flycatcher for Panama, while a pair of Buff-breasted Wrens provided excellent looks and photo ops.

We poked around the grounds for a bit, marvelling at the number of butterflies nectaring on the various flowers of the unkempt property. 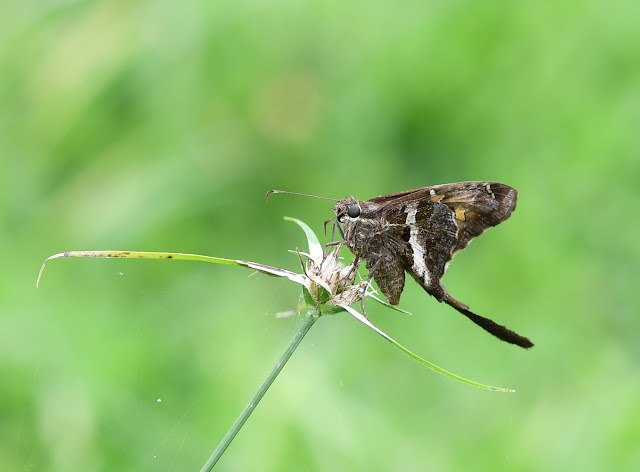 This area is apparently good for a few of the drier forest specialties of the area, such as Jet Antbird and Rosy Thrush-Tanager. We did not see these species but did not try for them in the right areas either (and the time of day certainly did not help).

A calling raptor revealed itself as a Gray-lined Hawk. This is a species that I had only encountered a few times previously, and never in Panama.

The Golden-hooded Tanager is quite the stunner. A pair in a nearby tree was too good-looking to pass up, so I snapped a few photos.

Laura and I hopped back in the vehicle and drove to the Canopy Tower where we were meeting with Carlos to return his truck. Our destination for the night was Panama City; Carlos even offered to drive us into the city since he had a meeting there that afternoon. Thanks Carlos!

I think I will end this blog post here. Following five days in the Gamboa lowlands, we were ready for a couple of relaxing days in Casco Viejo.

Posted by Josh Vandermeulen at 22:56