Many birders who visit San Cipriano do so for only one night, which is typically enough time to find their main targets (Five-colored Barbet, Choco Poorwill, Stub-tailed Antbird, etc). Laura and I are fortunate to have the luxury of spending quite a bit of time in Colombia. We aren't just on a two or three week birding trip trying to find as many species as possible. It was also looking more and more likely that San Cipriano would be our only chance to explore lowland forest in Valle del Cauca department. Our earlier plans to drive to El Danubio fell through and though we considered the possibility of returning to El Danubio after San Cipriano, this was very much up in the air as well.

We hedged our bets and booked two nights in San Cipriano, which turned out to be an excellent call since we never made it back to El Danubio. We figured that the risk just was not worth it at this time, so soon after the firefight between the FARC and the police in El Queremal.

Spending two nights in San Cipriano effectively gave us three days of exploration and two night hikes. Though the forest quality is not as high as some of the land around El Danubio, there are a multitude of interesting species and we kept finding new and exciting things right until the hour that we left town!

We awoke to a light rain which delayed our start by a few minutes. But soon, we were walking in the forest, enjoying the peace and quiet of the road before the pipeline workers started their day. It took some time to actually see our first species due to the gloom caused by the heavily overcast conditions but our list grew with a lot of heard-only species: Stub-tailed Antbird, Thicket Antpitta, White-tailed Trogon, Bicolored Antbird and more. Both the Stub-tailed Antbirds and the Thicket Antpitta gave us the run around, teasing us by perching just out of sight. I saw the Thicket Antpitta briefly, but not long enough for even binocular views. Things quickly improved however, as we spotted a Semiplumbeous Hawk perched across the river.

Next, a pair of Blue-tailed Trogons announced their presence vocally and we were treated to amazing views. I had heard this species previously in Ecuador, but never seen it!

Laura spotted a Black-crowned Antshrike nest beside the trail and a later return to the same spot revealed that two babies were present.

As the morning wore on we slowly birded alongside the main road and a few side trails heading towards the river. We spotted some neat anoles and inverts on the way, along with numerous birds, of course. 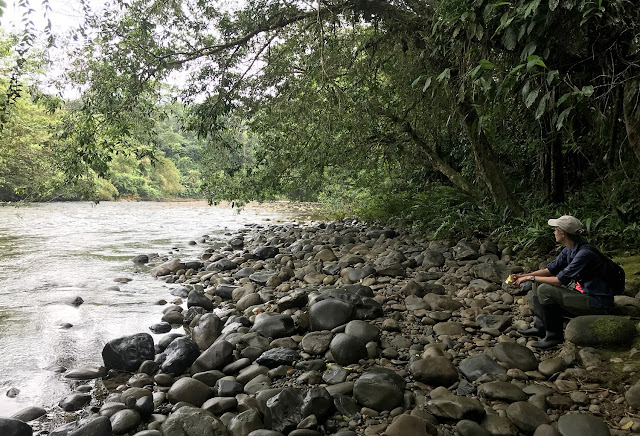 Many of the birds were new to my Colombia list including Fasciated Antshrike, Rufous Mourner, Pied Puffbird and Sulphur-rumped Flycatcher.

We followed a side-trail heading left from the main road that passed beside a few small waterfalls, before looping back and joining the main road.

I had heard that this location is good for Sapayoa but we did not encounter any. The "best" bird along here was a White-tipped Sicklebill that fed from some heliconias for a few seconds. Prior to last autumn I had had terrible luck with this species; this was my fourth encounter since!

Laura was on herp patrol and came through with a few nice finds, including a Scalyback Anole and several Bocourt's Dwarf Iguanas.

Laura and I called it quits by the late morning since it was quickly approaching noon and our breakfast had consisted of an apple and a few cookies. Maria and Alexis carried on while we returned, feasted on fried fish and enjoyed a long nap in the hotel room.

By mid-afternoon, feeling refreshed (if a little groggy), Laura and I returned to the trails. We met Alexis and Maria along the way and they had a surprise for us. A tiny poison frog beside the path! I believe this is one of the Allobates species.

We couldn't spend a few nights in San Cipriano and not go in the river, so that was the afternoon plan. We found just the spot.

Even though birding was not the main activity for the late afternoon, us birders never really stop! Alexis and I spent some time having a nice little photoshoot with some Dusky Pigeons that were feeding on a fruiting tree.

A couple of suspicious looking parrots alighted in a much larger nearby tree. Saffron-headed Parrots!

This is a species that I had heard on a few occasions but had still never seen well. It was a new species for Laura as well. We experienced a magical fifteen minutes watching the parrots feed.

The sun sank lower in the sky and we focused our attention on the refreshing river. But once again, the birding drew us out of the water onto the banks to fetch our binoculars. This time it was the other Pyrilia parrot species found here - the Rose-faced. Two pairs of them fed from a fruiting tree on our side of the river and a Black-breasted Puffbird perched on a nearby dead snag for a good while.

Alexis and Maria bowed out of the night-hike since they had been walking all day long without any breaks. Laura and I had snuck in an hour-long nap so were feeling "fresh" and eager to spend a few hours in the forest at night. 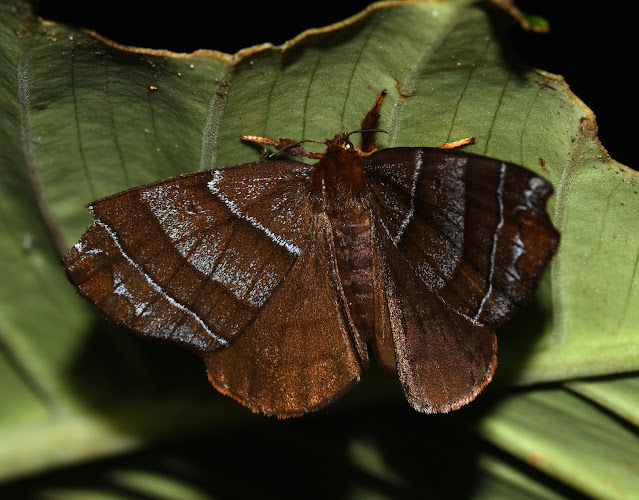 We headed out to the trail leading to the small waterfalls that I featured earlier in this post, as it appeared to have high herp potential.

Once again, despite our best efforts we fell short in our quest to find a snake. It was a little confounding, since we were in perfect habitat, but sometimes the snake gods don't comply with our requests.

Laura and I split up - her taking the trail, me walking in the creek - in a bid to increase our chances of finding a snake. We both found several glass frogs, anoles, and various insects.

Eventually she joined me in the creek, scanning one bank while I took the other. A serpentine shape caught my eye. Not a snake of course, but a type of swamp eel (I think!).

The highlight was still to come, however. A turtle! It hastily retreated beneath the jumble of woody debris caught on a downed tree across the creek and I missed my chance at snagging it. But I had a second chance at redemption and this time made good with my attempt.

This was a turtle in the genus Rhinoclemmys, commonly referred to as the Neotropical Wood Turtles. I had never seen one of these before despite all the time spent in the Neotropics. This is a species endemic to the Chocó called the Large-nosed Wood Turtle (Rhinoclemmys nasuta) which is the most aquatic species in this family.

It is primarily a herbaceous species, though they will also eat small invertebrates. Females of this species lay one or two eggs at a time, and oviposition may take place at any time throughout the year. This was a really cool turtle to find and I was pretty thrilled to spend a few minutes with it!

We kept searching the creek for a little while longer, while a pair of Crested Owls vocalized at regular intervals. But with an early start planned for the next morning we soon made our way back. 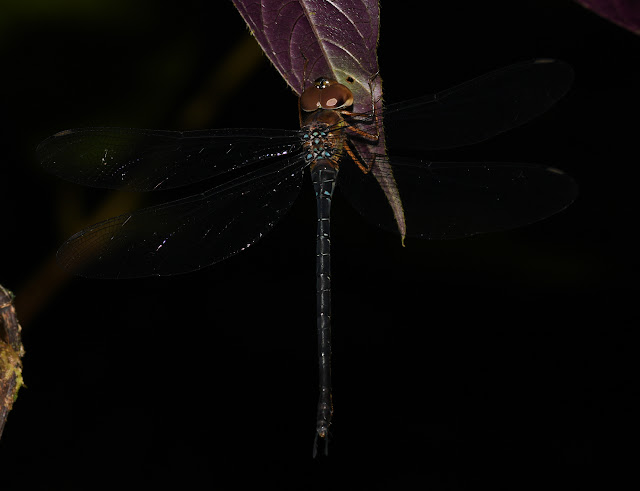 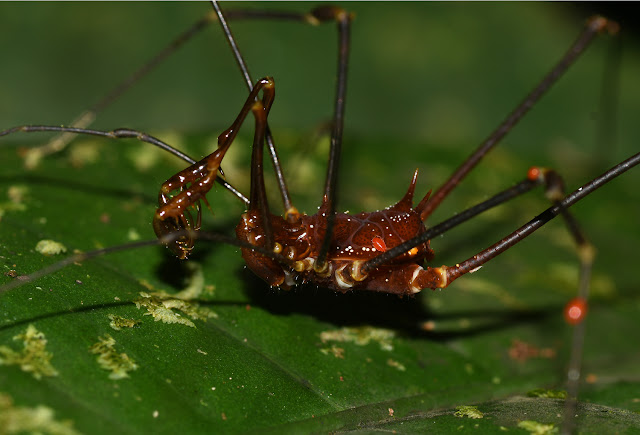 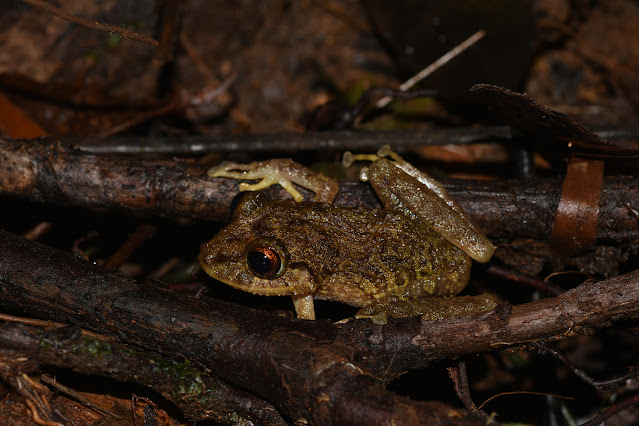 Back on the main road, the calls of a Choco Poorwill stopped us in our tracks. It was very close. I quickly found the bird by its eyeshine and fired off a few photos, but it did not stick around long, flying off to a distant tree. By brightening the photo you can just make out the bird's shape. We would have preferred a much better look but you take what you can get with tough night birds!

I met Alexis and Maria at 6 AM and we headed out along the main road, with Laura joining us an hour or so later.

We did not dawdle in the early section of the road since we had explored that segment a few times previously. As the light improved we found some neat birds including a Tooth-billed Hummingbird that was hovering underneath some of the broad leaves. Presumably, it was searching for spiders or other bits of live protein.

We heard a trio of Uniform Crakes and watched a pair of Dot-winged Antwrens. Laura arrived to the party just as we had a pair of Stub-tailed Antbirds teed up beside the road. With a little bit of work I managed my first photos of this species.

For the rest of the morning we birded the road, encountering small mixed flocks here and there. I hoped for Pacific Flatbill - the only realistic new bird species I could see here, after a successful couple of days - but struck out.

The sounds of ant-things just off of the road extended our morning birding by an additional half an hour. It was a proper swarm, with Bicolored Antbirds and Ocellated Antbirds making up most of the flock, but with a few Spotted and Chestnut-backed Antbirds, a Zeledon's Antbird, Northern Barred and Plain-brown Woodcreepers and more!

Ant-swarms provide ridiculously good entertainment for a birder. The birds are all down low and quite approachable, they generally stay in the same area, and they include a number of really interesting species that one doesn't get a chance to see too often. And of course, there is always the chance at "big-game" like a ground-cuckoo. It is the perfect recipe!

Laura and Maria headed back to town but Alexis and I kept birding for a little while longer. We crossed over the river on the extremely sketchy bridge. While it was well-constructed and quite sturdy, there was no floor to the bridge, and one had to very carefully step on thin beams. I named it El Puente del Muerte. Luckily, Alexis and I survived both crossings!

Our sojourn to the far bank added a few new birds to the day's checklist including another pair of Saffron-headed Parrots and a small mixed flock containing a Sulphur-rumped Flycatcher and several species of antwrens.

With the sun climbing high in the sky, we returned to town. Our last birds of interest were a bunch of White-thighed Swallows on the wire and a Black Hawk-Eagle overhead.

We immensely enjoyed our stay in San Cipriano - two days ended up being the perfect amount of time to explore here. But we had other places to move on to, so we hopped back on a brujita and rode the rails back out of town to our waiting vehicle and its glorious air-conditioning. 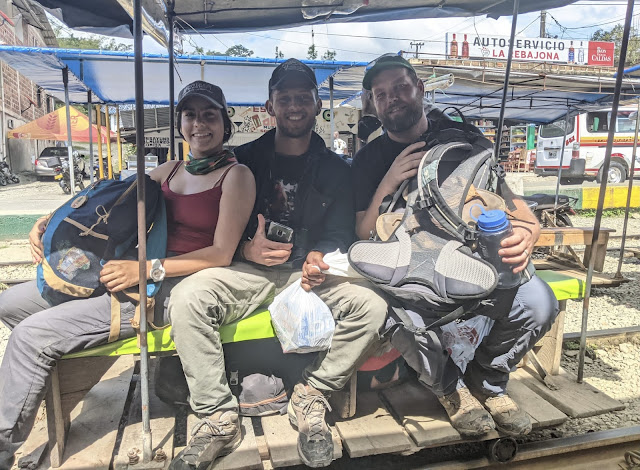 Posted by Josh Vandermeulen at 14:27