Laura and I left the Satipo area and drove north for several hours to La Merced. We were not originally going to include this region in our itinerary, but suggestions by several others changed our minds. Coffee farming is the major industry in this part of Peru and the Gerbi family has been growing coffee on their land for over 100 years. In recent years, they have began to include ecotourism and conservation in their business model. Above their fields, high quality montane forest can be reached. While their neighbours have cut most of their forest patches down, the Gerbi family has realized the importance of saving this forest. Birding and ecotourism has taken off for them, reinforcing the value of preserving nature.

The main attraction for visiting birders is the possibility of encountering the rare Cloud-forest Screech-Owl, but there are many other interesting east-slope birds species that occur on their land. I had a hit list of over 20 species, which included the likes of Ocellated Poorwill, Rufous-capped Nunlet, Cerulean-capped and Round-tailed Manakins, Creamy-bellied Antwren and more. We also had chances at other rare east-slope species that we had seen previously, such as Gray-mantled Wren and Black-streaked Puffbird. With only a day's notice, Laura and I were lucky to be able to arrange two nights at the hacienda with the Gerbi family.

We arrived at the hacienda in the early afternoon, being able to reach the property with our small car (though during rainier times of the year, a high clearance vehicle / 4x4 may be required). Martín and Nanci welcomed us with refreshing cold drinks overlooking the garden as we settled in. The area in the immediate vicinty of the hacienda includes secondary forest and several fincas, while the coffee plantations are a little higher up.

Typically, birders are required to be accompanied by Martín and Nanci's nephew, Moises who knows many of the birds found on the property. Because of the short notice, Moises was out of town and so Laura and I were free to explore on our own.

We spent a couple of hours that afternoon casually birding along the roadside just up the hill from the hacienda. We had a blast! The lifers came in hot and heavy, the first being a trio of charismatic Rufous-capped Nunlets.

An interesting vocalization from high in the trees alerted us to our first White-bellied Pygmy-Tyrant. eBird describes this species as appearing like a cross between a bumblebee and a down pillow, and they are not wrong.

We observed many other interesting birds, of which another half dozen were lifers for both of us. They included Yellow-crested Tanager, Yellow-breasted Warbling-Antwren, LaFresnaye's Piculet and Cabanis's Spinetail.

I had been looking forward to my first encounter with a Bluish-fronted Jacamar, and we did not have to wait long to find our first.

Below are a few more photos from our afternoon excursion. A great way to kick off our visit here!

That evening, Laura and I enjoyed a delicious home-cooked dinner made by Nanci. We set up the moth sheet as dusk descended, our first opportunity for this since arriving in Peru. And it was absolutely rocking! I will make a separate post about the moths (as well as other things that we found on a short night hike), but here are a few teaser photos. 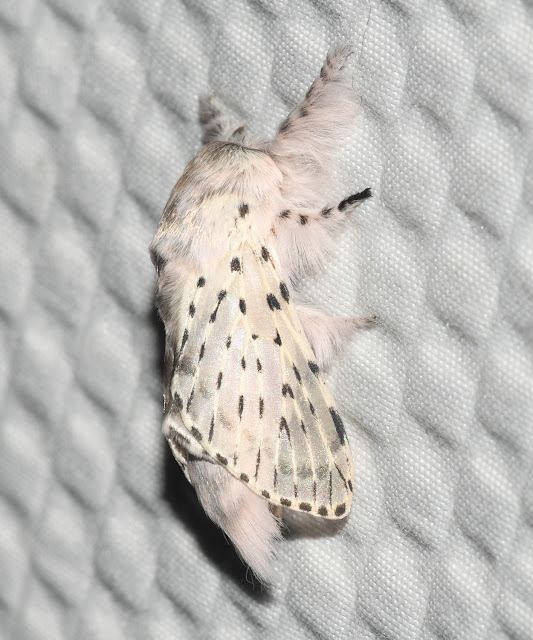 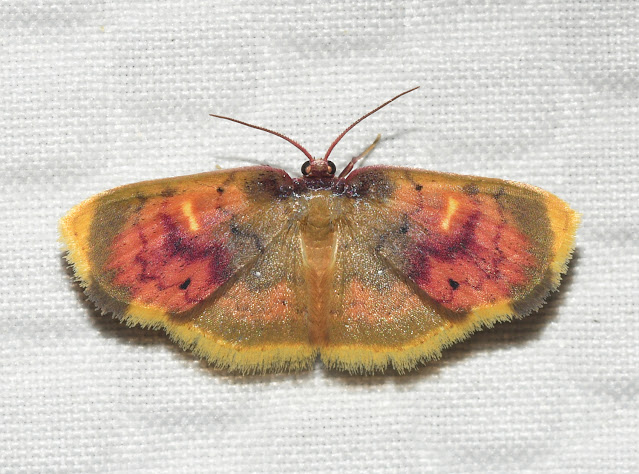 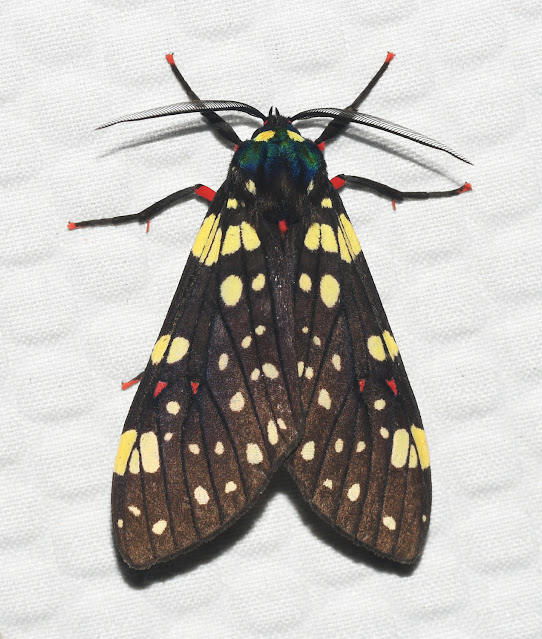 Laura and I awoke before dawn, sat down for breakfast which included some excellent coffee produced by the hacienda, and headed out to see what we could find. We decided that we would walk up the road, passing through secondary forest, cleared areas and coffee plantations before finally reaching high quality cloud forest located around 5 km from the lodge, with around 450 m in elevation gained. This plan worked out well since the birding was steady all morning long, and cloud cover prolonged the good birding hours into the early afternoon. We even found many of our targets in the cloud forest, even though it was almost 11 AM by the time that we had finally reached that location.

Our first Tataupa Tinamous were common by voice once we reached the coffee plantations by mid-morning, and several Inambari Woodcreepers quickly followed. Otherwise, the birds in the first few kilometers of the road were familiar (to us) species that occur in disturbed areas.

The action really picked up as we left the coffee plantations behind and entered good quality forest. A pair of Gray-mantled Wrens were a big highlight, since this species can be somewhat rare in the cloud forests of the eastern Andes. They are typically high in the canopy, and these were lower down (though still a bit distant for photos).

I tried some speculative playback at a good-looking spot, hoping for a hit from a Lanceolated Monklet. My intuition was bang on since one immediately started to vocalize! We eventually spotted the tiny little puffbird high in a bare tree.

Lanceolated Monklets are a bit of an enigma for us. We have searched for this scarce species in several different countries before, without success. I had heard one previously at the Chestnut-capped Piha Reserve in Colombia, while it was a new species for Laura. We really enjoyed our moment with this one, watching it sing back at us.

The soundscape evolved as we walked higher into the forest. The Coraya Wrens, Black-billed Thrushes and Rufous-collared Sparrows were replaced with Short-tailed Antthrushes, Wattled Guans, and Brown Tinamous. A welcome trade.

The Creamy-bellied Antwren has a limited range in foothill forests of the eastern Andes in central Peru, and it was one of my main targets for Hacienda Armorique. We heard several once we reached the appropriate forested habitats, and I managed some record photos of one of them.

The great birds just kept on coming. Some quiet tapping beside the road revealed a handsome Crimson-bellied Woodpecker. This is another scarce species, one that Laura and I had only observed once before.

We birded the cloud forest for several hours, nailing some more of our targets including Stripe-chested Antwren, Blackish Antbird, Spectacled Bristle-Tyrant, Olivaceous Greenlet and Chestnut-tipped Toucanet.

The sun eventually came out and bird activity slowed so we began the long walk back down the gravel road to the hacienda. My focus shifted to butterflies for much of the hike.

It had been an excellent excursion, with over 110 bird species tallied. We rested for a bit in the afternoon, gearing up for our evening of owling.

Martín drove us back up the road just after dark and we gave the Cloud-forest Screech-Owl and Ocellated Poorwill our best shot. The weather conditions couldn't have been more perfect - completely calm and relatively warm. The Ocellated Poorwills were common by voice, though we were unable to actually see any of them. But the owls were being a little tricky. It took until the 11th hour when Laura and I finally heard a pair of Cloud-forest Screech-Owls. We obtained some recordings and listened to the vocalizations for a while (to be reasonably sure that they were not coming from the similar-sounding Rufescent Screech-Owl), but the owls refused to come in. Still, it was an exciting end to a very full day.

It was getting late by the time that we arrived back at the hacienda but the moth sheet was popping off once again. Our minds were blown for the second night in a row, with a whole suite of new species joining a few of the "regulars" that we had seen during the previous evening. More to come in a future blog post... 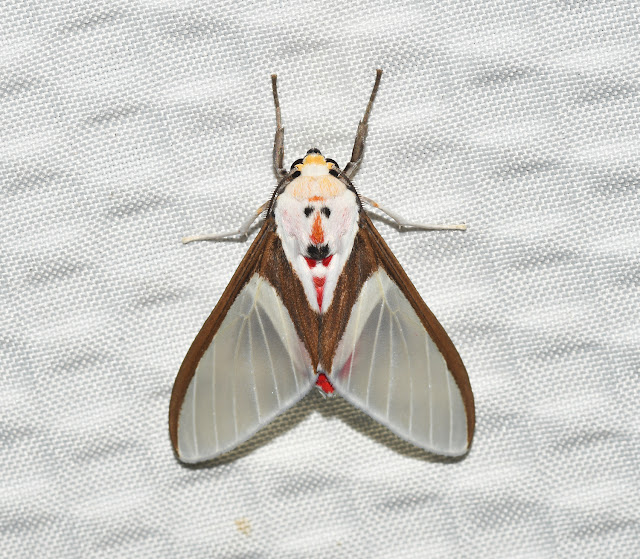 The rain fell throughout the night and it was still coming down pretty heavily before dawn. Our plan had been to have Martín drive us back up to be in the cloud forest by sunrise, but we held off while the skies opened. Finally, around 7 AM, the conditions seemed clear enough that we drove up.

Despite being in the high-quality forest at a relatively early hour, the birding was surprisingly slow. That being said, we still added a few new species including a crisp Ocellated Piculet.

Long-tailed Tyrants are just ridiculous looking, and this one was perched at eye-level.

An unexpected lifer was a pair of Andean Slaty Thrushes along the roadside. This species breeds in the southern Andes but will spend the austral winter further north. Unfortunately, this is the best photo I managed - the female.

We worked hard but could not turn up any mixed flocks. While tanagers had been dripping off the trees yesterday, today we noted low numbers of only six species. At least the insects were in abundance, providing something to look at!

But with time, we turned up a few things of note. First up was a vocal pair of Black-breasted Puffbirds, one of which came in to check us out.
Next up was a Cerulean-capped Manakin. This Peruvian endemic had been giving us fits for days. We had heard a few along the Satipo Road, and had seen one poorly during our first full day at Hacienda Armorique. Finally, we were able to savour the delicate plumage details of this beauty.

And lastly, I noticed a guan sitting very quietly in a tree beside the road. A Wattled Guan!

Wattled Guans are frequently heard in high-quality cloud forest, their distinctive call sounding eerily similar to a table saw cutting through a piece of wood. The "lumber mill" was at full tilt that morning with several Wattled Guans sounding off but we really did not expect to see one. They are extremely secretive and very difficult to observe. This was Laura's first sighting and my second, despite all of the time that we have spent in this species' range over the last few years.

The strange wattle is clearly visible in this photo.

Laura and I made good time on the walk back to the hacienda, only stopping for a snake that zipped off the road (likely a Sipo of some kind - genus Chironius) and the occasional interesting bird such as this Blue-crowned Trogon.

Before departing, we had one more bird in mind. We had still not caught up with a Round-tailed Manakin but Martín had a lek of this species on his property. A short walk up the hill, and we were surrounded by several males showing off.

Two of the males were having a dance-off and we enjoyed watching their slick moves. Unfortunately, I never managed a good photo showing them in action!

We thoroughly enjoyed our visit to Hacienda Armorique and would recommend it to any birders hoping to explore high quality forest on the eastern slope. The food was delicious, Martín and Nanci were very hospitable, and the price was right. But most importantly, the birding (and mothing) was simply amazing.

Posted by Josh Vandermeulen at 21:37

What an amazing place and journey you are having! Love reading your blog and seeing your photos!