No visit to Junín would be complete without a search for its eponymous bird species, the Junín Grebe and Junín Rail. Only several hundred grebes remain, down from a peak of a few thousand, mainly due to runoff from nearby mines reducing the water quality. Introduced trout that snap up young birds is not helping the situation either.

We enlisted the help of Cesar Donato, a resident of Ondores who works as a local bird guide. Cesar has assisted with population studies of the Junín Grebe over the years and he coordinates boat trips out into the middle of the lake where the species can be found at this time of year. It is nearly impossible to find Junín Grebes from shore without considerable effort. Besides, we were hoping for intimate views beside the boat, instead of distant specks as viewed through our scope.

We drove up to Ondores in the pre-dawn darkness. As the day began to brighten, and I was still half-asleep, Laura's keen eyes spotted an owl on a wire! Not the sort of location where one typically sees Burrowing Owls.

Cesar had a beat on Junín Rails and so that is where we headed shortly after dawn. Here is a photo of the area, taken the previous afternoon.

Anyone who is familiar with the Black Rail knows how notoriously difficult it can be to observe. Out of all of the North American bird species, the Black Rail may top the list of "most likely to be heard-only".

The Junín Rail is a subspecies of Black Rail, though some authorities think that individuals are different enough from other populations to warrant species status. Regardless, they are a mouse-sized rail that shuns being out in the open. Somehow, Cesar has managed to train a few Junín Rails to venture out to the edge of the marsh. The reason: a bit of chicken feed that the rails have acquired a liking of.

As dawn broke, we stood quietly beside a narrow channel in the marsh where Cesar had, moments earlier, placed some of the rail's favourite snack. It felt a little like visiting an antpitta feeding station somewhere in an Andean cloud forest!

He played the tape to let them know that it was breakfast time and within minutes, three or four Junín Rails began to vocalize around us. Then, there it was. At the edge of the channel, a little face peeked out of the reeds.

This particular individual is a female, which can be ascertained by the colour of its upperparts and its less obvious spotting. For several minutes we watched a male and a female dart out into the open, grab a few pieces of corn, and sneak back into the reeds.

Cesar may have been focusing his training on the Junín Rails, but this clever rodent had figured out the plan and had joined in on the action. Whenever he would appear Cesar would wave at him, but the little guy was not tricked. Within seconds, it was back, shoulder to shoulder with the rails. No wonder it was so round! 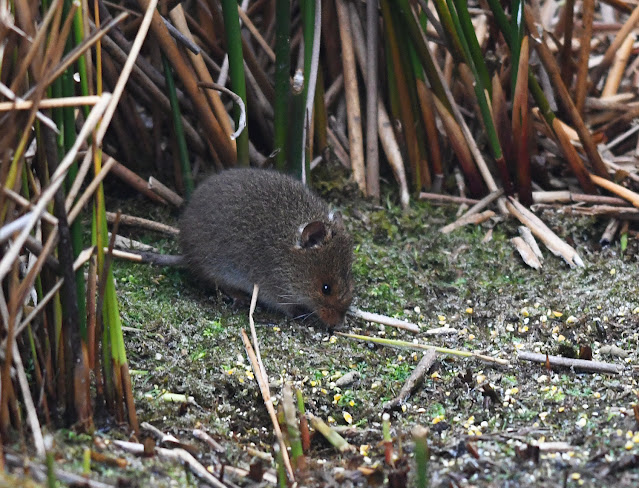 Below is the only usable photo I managed of the male Junín Rail (with the round friend in the foreground).

We left the rails and continued on a bumpy gravel road for another 20 minutes or so, reaching the town of San Pedro de Pari. Here, we met with Dani who would navigate us out into the lake with his small boat. The thick fog had me concerned since finding the Junín Grebe is not guaranteed at the best of times.

Laura and I had layered up with all of our warmest clothes for the boat ride. After all, the temperature was hovering around the freezing mark when we set off. At least there wasn't a breeze, though we created our own by motoring through the channels into the open lake. It was frigid! I kept warm with visions of the Junín Grebe in my head; Laura kept warm by wrapping herself in a blanket we had brought with us.

I kept trying to convince myself that the visibility was improving as the minutes ticked by. At least it was warming up ever so slightly; the light dusting of snow on the boat had turned into slush. That's progress, right?
The sun slowly burned through enough of the fog to increase visibility sufficiently. Our grebe search triggered a few false alarms as distant waterbirds appeared. Each time, they turned into an Andean Duck or a Slate-coloured Coot. Finally, our perseverance paid off. I spotted a grebe that had almost snuck past us and alerted Cesar. Dani maneuvered the boat around, and there it was in all its glory - our first Junín Grebe.
We found two others over the next little while, and with some practice I managed some photos that I was very happy with.

Unfortunately, the Junín Grebe is now classified by Birdlife International as Critically Endangered, the highest ranking possible before Extinct. The grebes may number fewer than 250 individuals when formerly they were quite common on the lake. This species is flightless so it is not able to colonize any other lakes, either.

It is always a little bittersweet when observing a bird as rare as the Junín Grebe. On one hand, we were ecstatic to finally cross paths with our desired species, while at the same time knowing that this species may very well be extinct during our lifetimes.

We were situated roughly in the middle of the lake and had about an hour-long boat trip ahead of us to reach the dock. The temperatures warmed to a balmy six degrees Celcius during this time.

We thanked Dani for his services and drove back to Ondores with Cesar. After saying our goodbyes, Laura and I explored for a little while more. We still had not managed to catch up with a Buff-breasted Earthcreeper, one of the few potential lifers remaining for us in the region.

Cesar had tipped us off on a good location and his intel was perfect. That was easy!

A large flock of Bright-rumped Yellow-Finches had also populated the area.

And with that, our time in Junín had come to a close. We had a long drive ahead of us to the town of Huánuco, located near the crest of the eastern Andes. Quite a few uncommon and endemic species awaited us in the upcoming days...

Posted by Josh Vandermeulen at 21:01