Rare Endemics In The Marca Area

Our month with the rental car was nearly over and it would soon be time to return it to Lima. To break up the drive between Caraz and Lima, I planned for a night in the Valle Fortaleza. Several birds restricted to a narrow band of northwestern Peru had been reported from this area, including the Russet-bellied Spinetail and Bay-crowned Brushfinch.

As in typical Peruvian fashion, absolutely none of the eBird checklists from this area provided any useful information. No details were given on any of the interesting species, and most checklists were long traveling ones. However, Laura and I figured that since the birds are definitely known from this area, we would just need to find suitable looking habitat. If so, we would stand a decent chance of finding what we were looking for.

Most of the day was spent driving southwards. We made a brief pitstop at Laguna Conacocha, a high alpine lake chock full of waterbirds. We did not see anything out of the ordinary, but it was enjoyable to break out the spotting scope and check out Silvery Grebes, hundreds (thousands?) of coots and ducks, and several species of shorebirds. By early afternoon we passed the town of Cajacay, confirmed that there were a couple of options for lodging, and headed down into the fertile Valle Fortaleza.

A brief birding stop by a bridge was largely unproductive, though a local man wandered over to see what we were up to. He was a little suspicious at first but quickly warmed to us once we described how we were birdwatchers. He owned a number of peach orchards in the valley and did not let us leave without a bag of fresh peaches! They were delicious...

Laura and I birded the beginning stretch of the road leading to the town of Marca, as both the spinetail and brushfinch had been eBirded from here. While we struck out with those, we found a few things including a  pair of Hepatic Tanagers and a cooperative Fulvous-headed Pygmy-Tyrant. This little flycatcher occurs in dry forest in northwestern Peru and southern Ecuador.

A peculiar thing about Peru is that many of the small transport trucks are adorned with paintings on their back. I have amassed a collection of some of the best ones. Caucasian Jesus is featured strongly in these, as are animals such as doves, wolves and eagles. In this rendition, a Bald Eagle is hunting strawberries. 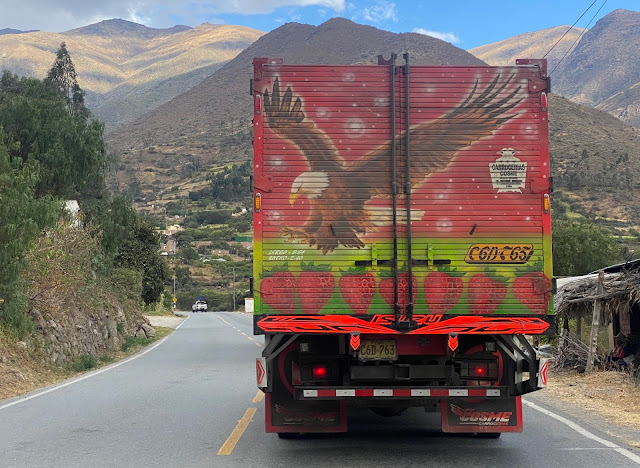 August 10, 2022
Laura and I awoke bright and early from our basic hotel in Cajacay and returned to the road leading to Marca. We had driven scarcely five minutes down the highway when Laura spotted something interesting perched in a tree while we drove by at 50 km/h. Could it be an owl?
We backtracked and there it was - a Peruvian Pygmy-Owl!
We watched the adorable but fierce hunter for a while. Eventually, something in a nearby thicket caught its attention and it took off like a bullet.
It took a little bit of effort but we succeeded with our first target - Bay-headed Brushfinch - in a cultivated area along the Marca Road. An attractive little brushfinch, though it was a bit tricky to photograph.

We continued up the road, stopping at a few of the gullies where the plants had grown denser and where I suspected that Russet-bellied Spinetails may lurk. We did not find any.
These ravines were good in general, and we found species like Bare-faced Ground-Dove, Canyon Canastero and Black-necked Woodpecker.
Even in this dry landscape some plants were flowering and hummingbirds were numerous. Purple-collared Woodstar was the dominant species, and others included Giant, Oasis and Amazilia Hummingbirds, Sparking Violetears, and Bronze-tailed Comets.
We reached the town of Marca and continued up the gravel road beyond. The day was still young, after all.
Our strategy to stop at every gulley paid off in a big way only a kilometer or so from Marca. We found a nice mixed flock, and though the Russet-bellied Spinetails remained unaccounted for, two other species more than made up for that!
First up was an interesting chat-tyrant that approached with curiosity as I played the call of the Peruvian Pygmy-Owl. We had seen several common White-browed Chat-Tyrants earlier, but this one was smaller and sporting chestnut wingbars. A Piura Chat-Tyrant!
This scarce flycatcher is found in a narrow elevational band in the western Andes of northern Peru. I had noticed a couple of eBird reports from this area and so it was on my radar, but not one I realistically expected to come across. Compare it to a White-browed Chat-Tyrant, below.
And the fun had just started. As we continued around the bend, I looked down at my feet and was shocked to see a brilliant red, white and black serpent! Holy crap!
I quickly went for my camera and fired off a number of shots. Based on the head scalation I was pretty sure that it was a coralsnake, but I had no idea which one. Later that day, we determined that it was a Desert Coralsnake (Micrurus tschudii).
The Desert Coralsnake is a poorly-known species found on the dry Pacific side of Peru and into southwestern Ecuador. Some sources state that this snake ranges from sea level to 1450m, but we found this one at around 2700m in elevation. Desert Coralsnakes are typically diurnal and mainly prey on geckos and colubrid snakes.
We were elated to come across such a beautiful snake, especially on a day in which snakes were not really on our radar. This was my first coral since a Central American Coralsnake that we had found in Darién, Panama last autumn, and Laura's first since she had spotted a Costa Rican Coralsnake in Costa Rica in April.

Elated, we continued up the trail. Our hot streak continued as we found a gully that was occupied by a pair of Russet-bellied Spinetails!
A lot of spinetails are somewhat similar looking, but in my opinion this is quite an attractive species. Spinetails are often incredibly skulky but these were rather accommodating.
Unfortunately, the Russet-bellied Spinetail is an endangered species. It is only known from a few valleys and is under threat due to habitat loss. They prefer dense scrub, and this is often burned down for grazing or agriculture.
We left the spinetails in peace and continued on our way back to the town of Marca. It had been an incredibly successful morning!
The sounds of a marching band welcomed us back to the town and so Laura and I took a few minutes to see what all the commotion was about. The town square was packed with people and a religious festival of sorts was going on. While we waited to purchase some local sweetbread from a vendor, a friendly guy introduced himself to us (in English, no less!). His name was Fritz and he was visiting Marca with his father and sister, as his grandmother resided here. Over the next hour we hung out with Dayana and Fritz. It turns out that we had passed through Marca during the one day each year where the town had its annual festival. Fritz's father even purchased snacks for us, an example of the hospitality of Peruvians.
We said our goodbyes to Fritz and Dayana and continued westwards towards the coast. Since we still had a bit of time to kill in the afternoon, we stopped at a coastal wetland called Albufera de Medio Mundo. 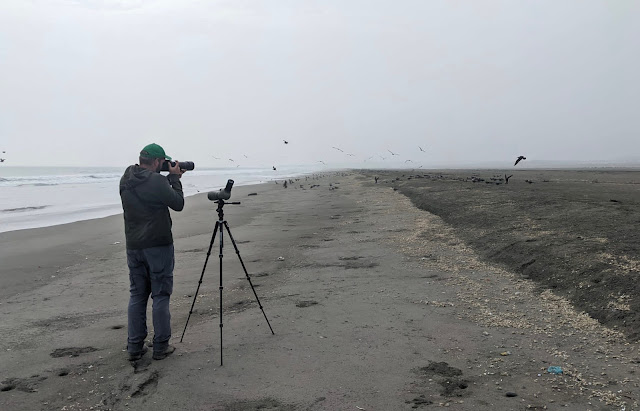 The beach was absolutely loaded with gulls and we found some Elegant Terns tucked in amongst hundreds of Gray Gulls. We also spotted several Black Skimmers, Snowy Plovers, Belcher's Gulls, Whimbrels and Sanderlings.

The Gray Gulls were looking rather photogenic and so I snapped a few extra photos of them. Despite being a common gull in this region of Peru, they are stunning and one of my favourites.

Before heading back to Lima, we figured that it was time to turn Pardusco into Blanquito. In the past we have been hit with a rather expensive cleaning fee from a rental agency, and we did not want to risk the same happening... 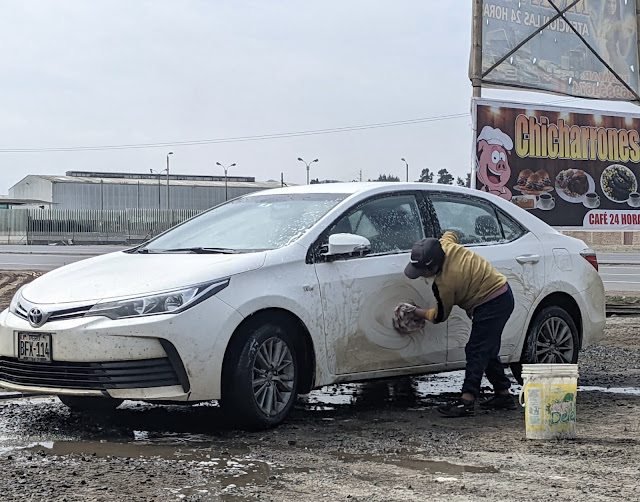 August 11, 2022
Originally, we had grand plans to spend the morning birding Lomas de Lachay before returning the rental car to Lima. You may recall that a month ago we had to deal with a dead battery while stranded on the Satipo Road. While we managed to sort that out, the car had issues starting, turning over very slowly in the subsequent weeks. These problems escalated on the morning of August 11 and the car nearly did not start in the morning. While we were eventually able to fire it up, we had concerns that if we shut off the engine we would be stranded. And so, instead of birding Lomas de Lachay all morning, we just did an hour or so of car-birding up the entrance road.
Lomas are hills along the coast of Peru that manage to collect fog coming in off the Pacific Ocean. While the surrounding landscape is completely barren without so much as a single cactus in sight, the lomas can become green with lush vegetation since the fog condenses as it rises. A number of interesting species reside here. While we were unable to enter the reserve and search for the likes of Grayish and Thick-billed Miners and Cactus Canasteros, we found a few things of note along the entrance road. These included Peruvian Thick-knees, Peruvian Pipits and a ton of Least Seedsnipes.

We discovered several super cute Least Seedsnipe chicks that were following one of their parents around.
And with that, our four weeks with the rental car in central Peru had come to an end. We returned the rental car to Lima without issue, and the next leg of our trip began. Stay tuned...
Posted by Josh Vandermeulen at 22:47