With several days remaining until the car needed to be returned to Arequipa, Laura and I detoured to the Colca Canyon area. This is a popular tourist site reachable from Arequipa, and as such, is the type of place that we would normally avoid. The main draw here is the opportunity to see Andean Condors at close range as they fly past a certain viewpoint along the canyon's rim. We had already seen Andean Condors on a few occasions during this trip. Some of the encounters had been amazing, such as a jaw-dropping encounter with two individuals in the Santa Eulalia Valley.

My interest in the Colca Canyon was mainly due to the presence of several high-Andean bogs situated close to the paved road that connects Arequipa with the canyon. These wetlands hold populations of the White-throated Sierra Finch (which we had dipped on in Moquegua), while Rufous-bellied Seedsnipes are also commonly reported. We had seen the seedsnipes previously in Ecuador but they are a pretty amazing species, one that we would love to see again. Laura and I booked two nights at a cheap hotel in the town of Chivay with a plan to explore the bogs as well as a few other nearby sites.

We drove across the puna grasslands, passing by the same landscape that we had viewed a few days earlier. Again, we briefly checked out Laguna Lagunillas to see if the three species of flamingos were still present. I also hoped to obtain slightly better views (and photos) of Andean Avocets.

The wind had been howling on our previous visit here, but today, the conditions were wonderfully calm. As a bonus, the Andean Avocets cooperated for better photos even though they were still a little skittish.

We turned onto the road leading to the Colca Canyon. White Toyota Hiaces full of tourists littered the highway, while some others congregated at several roadside pens full of domesticated llamas and alpacas so that everyone could take some photos for their Instagram accounts. Yep, we were back on the tourist route. Strangely, none of the buses had stopped near the herds of wild Vicuñas, a much more interesting animal, in my opinion. 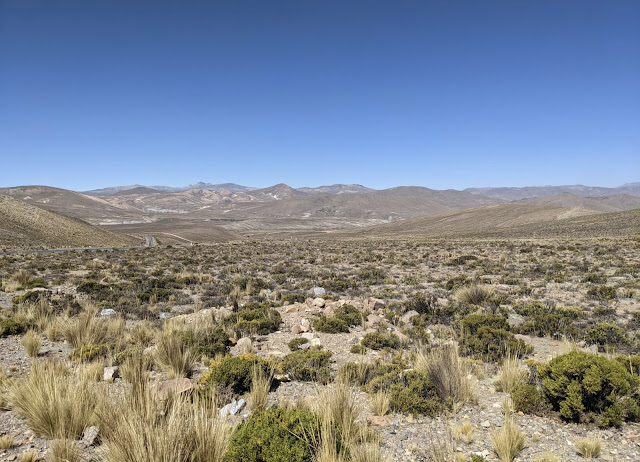 The road slowly climbed into the mountains, passing beautiful scenery. Laura and I made a few stops to stretch our legs.

We explored one of the roadside bogs for an hour or two. Bofedal de Chucura had records of our target species, but we were unsuccessful. A Diademed Sandpiper-Plover was a nice find, though. This peculiar shorebird is only found in high-Andean bogs, most of which are inaccessible. In the right habitat, however, the species is not too uncommon.

We discovered a nice variety of perching birds including ground-tyrants, siskins and sierra finches. Unfortunately, we couldn't turn any Glacier Finches or Plumbeous Sierra Finches into our target, the White-throated Sierra Finch.

That evening, Laura and I went for a stroll towards the downtown square in Chivay, passing the ladies who had garnished their pet alpacas with colourful ribbons and bobbles, hoping to extract money from tourists for photo opportunities. Though the restaurants were a little overpriced in this touristy town, we were happy to find a place selling excellent pizza (a rare find in Peru). Between the 'za and a cold beer, it was a great way to end the day.

The woman running the hotel we stayed at in Chivay provided us with an excellent recommendation for a trail in nearby Yanque. Leading to the Uyo Uyo ruins, the trail passed alongside a scrubby creek bed that was full of birds. It was a great way to spend the morning.

I even had to take a picture of our old friend, the Rufous-collared Sparrow. He is a constant companion in the Andes.

The Creamy-breasted Canasteros were common in this environment, often perching prominently on columnar cacti.

We had the ruins basically to ourselves as well. The birds and butterflies were active and we enjoyed our short visit here.

Late in the morning we drove back up the paved road towards Arequipa, though we only traveled as far as one of the bogs called Quebrada Japo. We had run out of time to visit here during the previous afternoon, but it seemed like a promising site for our target birds.

Again, our main targets refused to show themselves. One of the local herds of llamas was grazing on this wetland with their disturbance possibly contributing to the reduced numbers of birds.

The plant diversity above 4000m is surprisingly high and I photographed a number of flowers.

To the untrained eye, this plant looks like a big piece of moss. I took a few photos and didn't think much of it, as my eye is rather untrained when it comes to botany. Later, while doing some research, I discovered that the age of this plant may be 3,000 years or more! It is called the Yareta and is in the carrot or umbellifer family (Apiaceae). The Yareta is highly adapted to live in cold alpine environments and it can grow at an elevation of 5200m, heights where most other plants simply can't survive. Its dense, mat-like structure helps to prevent water and heat loss. Given the tough growing conditions in the high Andes, it is no surprise that the Yareta only grows a centimeter or two each year.
This absolutely minuscule hairstreak was a fun discovery.
We tromped around for a while and flushed a few Puna Snipes. A single Diademed Sandpiper-Plover also appeared at the edge of the bog.
We spent a brief period of time sloshing around another wetland that was a few hundred meters lower in elevation back towards Chivay. We turned up a nice variety of birds including a very photogenic Variable Hawk.

Even though we did not find our main target birds, exploring a high Andean bog is a good use of time as they are always full of interesting species.

Laura and I had to return the car to the rental agency in Arequipa that afternoon. Not wanting to dip on the White-throated Sierra Finch and Rufous-bellied Seedsnipe for a third time, we left relatively early and planned for several hours at Quebrada Patapampa, a series of wetlands that we not yet visited. I had high hopes as Quebrada Patapampa seems to be reasonably reliable for both the sierra finch and the seedsnipe.

A flash of a hummingbird with white tail feathers caught my eye as we ascended the mountain leaving Chivay. I pulled over and a few seconds later, Laura and I were looking at our first Andean Hillstar. It is a gorgeous species, though the harsh light made photography a little tricky.

An Andean Condor cruised by overhead as well.

Quebrada Patapampa is set off the road by a good distance, but the dirt road leading to it is easily navigable in a small car. The morning was cool, calm and brilliantly sunny.

We were in the process of putting on our rubber boots when the distinctive calls of White-throated Sierra Finches caught my ear from across the bog. A second later, a Rufous-bellied Seedsnipe blasted across the wetland, disappearing down a small hill towards a second wetland. That was easy!

The White-throated Sierra Finches remained a little skittish, always staying between us and the sun to ensure that they remained backlit to us.

The White-throated Sierra Finch has a much more restricted global range compared with most of the other sierra finches, and it can be rather local and erratic. Laura and I felt fortunate to finally encounter some after striking out in a bunch of places.

We explored the second wetland where the Rufous-bellied Seedsnipe had flown towards. And we hit the jackpot! Flocks of Rufous-bellied Seedsnipes, completely hidden in the stony landscape, exploded from the hillside above us as we walked past. Several other groups were feeding a little more conspicuously at the bog edge. When it was all said and done, we counted at least 54 individuals!

Given the time of year, I wonder if this is a winter congregation site for Rufous-bellied Seedsnipes.
From a distance, the seedsnipes look rather similar to a lumpy, beige rock. But up close, the feather detail is exquisite.
Laura and I hit the road, thrilled with the morning's success, and completed the long drive to Arequipa. We only made one stop along the way after spotting some deer up on a rocky hillside. Luckily, they remained in place while I turned the car around and backtracked. They looked quite different from the White-tailed Deer that we had seen in the Colca Canyon. These were Taruca, a species of high-Andean deer that finds habitat between 3500m and 5000m. This species lives in low densities in southern Peru, Bolivia and northern Chile and Argentina.

We returned the car without issue, swapping it out for a Toyota Hilux for our final two days in Arequipa.

Posted by Josh Vandermeulen at 12:18