Laura and I consider ourselves reasonably savvy when it comes to renting vehicles. We have rented in over a dozen countries, have used all of the big companies as well as many local ones, and have dealt with most situations that one might encounter. However, we experienced a new scenario when renting a car in the city of Arequipa from a small, local company. Upon picking up the vehicle at the office, we were informed that "our" car could only be driven on paved roads. The employee provided us with a map showing which major roads were off limits. Any violation of this rule would result in a hefty fine. I was quite annoyed as this information should have been relayed to us ahead of time when we made the reservation. Normally in a situation like this, I would just agree and then drive on the gravel roads anyways. But we had slipped up and informed him of our likely route before he had mentioned the dirt road restrictions.

Fortunately, most of our route could be easily done on paved roads but there were two sites in particular that required driving on a gravel, both north of Arequipa. We decided to rent the car for only 9 days, return it to Arequipa and swap it out for a pickup (which was allowed to be driven on gravel roads), and then spend the last two days visiting the dirt road sites with the pickup. We were successful in getting the employee to reduce the daily rate for the pickup so that it was only a little bit more expensive than the original car we rented.

Laura and I completed the vehicle exchange during the afternoon of August 22. It felt a little ridiculous to be driving around in such a big truck, equipped with roll bars, a fire extinguisher, a shovel and pick ax, especially since I knew that the gravel roads we would be navigating can be easily traversed with a small car. 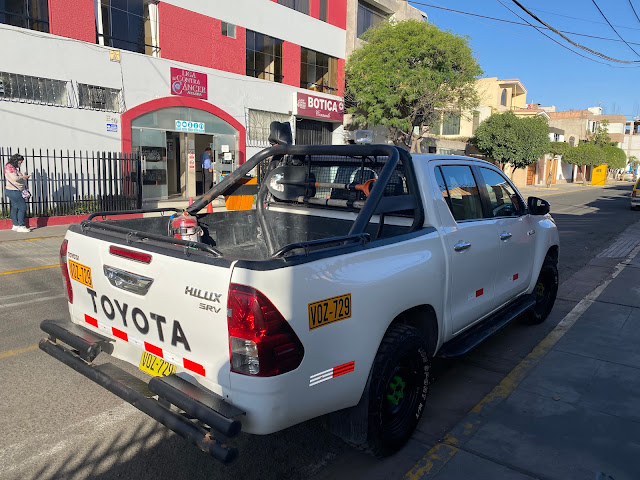 Surrounding Arequipa lie several volcanoes which contribute to the dramatic scenery of the area. To the north is snow-capped Chachani, while Misti looms to the northeast of the city. East of Arequipa is another series of mountains referred to as Picchu Picchu. A gravel road snakes its way along the south flank of Misti, climbing higher in elevation until reaching a plateau above 4300m. Situated on this plateau is an extensive salt lake, creatively called Lagunas Las Salinas.

The gravel road leading up the mountain towards Lagunas Las Salinas is a popular birding route. The vegetation communities along the road change depending on the elevation. The town of Chiguata sits at roughly 3000m, while the plateau containing Lagunas Las Salinas is at 4300m. A sizable patch of Polylepis forest can be accessed along this road near the 4000m mark.

Laura and I left our motel in Arequipa at dawn and made our way to Chiguata, the beginning of our route up the mountain. We had around six target bird species.

The first two targets fell at our first stop. First up was a pair of Black-hooded Sierra Finches, looking sharp in the early morning sun.

A couple of noisy White-throated Earthcreepers populated a nearby gravel pit. This species proved to be reasonably common in this lower elevation band, but it was absent further up the road.
The White-throated Earthcreeper has a limited range, preferring dry Andean valleys in southern Peru and northern Chile. An isolated population has recently been discovered near Lima in coastal central Peru.
Earthleaper.
Of course, there were many other birds to look at given that the sun had just risen and everything was active. We briefly observed both Andean Tinamou and Andean Hillstar, along with common species in this habitat type such as Giant Hummingbird, Yellow-billed Tit-Spinetail and several species of sierra finches.
Our third target to fall was a skulky Puna Canastero, but my photos of it leave a lot to be desired so I will refrain from posting them.
I had been keeping an eye out for any Straight-billed Earthcreepers, though they prefer slightly higher elevations here than the White-throated Elevations. Upon reaching the right elevation (around 3500m) we quickly found a Straight-billed Earthcreeper!
Any time that I can obtain a good photo of an earthcreeper or other furnariid is a cause for celebration. These brownish streaky things don't lend themselves often to photography.

Just like that, Laura and I had found four of our target birds. The last two species (Tamarugo Conebill and Thick-billed Siskin) are Polylepis specialists here. The Tamarugo Conebill has a very limited breeding range in northern Chile while the entire population winters a little further north in the mountains, reaching southern Peru. The Thick-billed Siskin ranges a little wider, but it is never common and is strongly associated with Polylepis groves.
Birding along the road was becoming quite frustrating given the volume and frequency of large trucks and buses. The road was composed of dust that seemed to get finer and finer the further up the mountain we traveled. During our roadside birding we had to make frequent dashes back to the truck, or risk getting completely coated by the dust.
Luckily, a small trail led off of the road into the Polylepis forest. This gave Laura and I a break from the traffic and its associated dust. We made the most of this opportunity, even though it was now late morning and bird activity had really quieted down.
The Tamarugo Conebills were present in large numbers. In fact, they may have been the most common species for us in the Polylepis! An attractive little conebill, though one that was extremely skittish and difficult to observe well.
And we succeeded with our sixth and final target for the day as well, the Thick-billed Siskin. A male began to sing from somewhere up the slope behind us and I managed a quick view of it before it took off down the hillside. We heard it a few more times, but it never showed its face again. A frustrating encounter, though I suppose it was better than not seeing the bird at all.
Having had a productive morning of birding, Laura and I visited the salt lake for an hour or so at midday.
Lagunas Las Salinas is well-known as a site to find James's Flamingos along with small numbers of Andean Flamingos. Fortunately, we had already seen these two species earlier in the trip and so we did not need to track them down. That being said, it was hard not to notice the James's Flamingos. Even with the harsh midday light, I could not resist taking a few photos against the white, salty backdrop.
August 24, 2022
For our second and final morning with the Toyota Hilux, Laura and I drove north along the road that passes between the volcanoes Chachani and Misti. We had no conceivable bird target since our previous day had been so successful. I figured that we had two options: 1) return to the Polylepis grove from the previous day, to give ourselves another shot at better views and photos of the Thick-billed Siskin, or 2) visit this new road and search for Puna Canasteros which are quite common here.
We picked option 2 since it also meant that we would be visiting a new area. This was a good idea. Not only did we improve our Puna Canastero viewing experience, but I cracked off a few photos that I was very happy with.

We birded a little further up the road until it was the late morning. We did not find anything too crazy, but it was nice to enjoy species like Andean Hillstar, Creamy-breasted Canastero, D'Orbigny's Chat-Tyrant and Rufous-naped Ground-Tyrant. I also spent some time checking out the flowering plants along the roadside, some of which were attended by various butterflies.


That evening, Laura and I caught an overnight bus to the city of Cusco where the next leg of the adventure waited.
Posted by Josh Vandermeulen at 10:43