The next morning we were up by 4:30 AM and hiking on the road by 5:00 AM. It turns out that our drive to Jardín was longer than we had anticipated, and in order to make it there by 4:00 PM or so to watch the Andean Cock-of-the-Rock lek, we had to leave Montezuma Road no later than 10:30 AM. Since we had already found all of our high-elevation targets, our plan was to bird the lower stretch of road. We set out on foot, hoping to cover 4 or 5 km in the dark, before turning around at dawn and slowly birding our way back.

The plan worked quite well and we added a few new species including several of our targets. A Crimson-rumped Toucanet flushed from some bushes alongside the trail while it was still dark out - we managed to spotlight it, confirming its identity!

The dawn chorus was excellent, highlighted by a Cloud-forest Pygmy-Owl, calling vigorously as dawn broke.

We found around 70 species along the road throughout the morning though of course there was some overlap with the species from the previous day. Several Choco specialties appeared, including "Choco" Warbler, acknowledged by some as its own species but currently considered a subspecies of Golden-bellied Warbler. A Choco Tyrannulet was also a nice find.

We ran into several excellent mixed species flocks, one of which contained Yellow-green Bush-Tanager and Yellow-breasted Antwren. We were happy to find a few more Glistening-Green, Rufous-throated and Purplish-mantled Tanagers, while also obtaining much better looks at a Black Solitaire.

We tore ourselves away from this last mixed flock as we had some ground to cover so that we could make it back to the lodge in time. Our group was strung out over a wide section of road at one point, when Daniel and I discovered a Bar-crested Antshrike in a cleared area not far from the lodge. We waited for Dave so that we could let him know, but when he returned he mentioned that he had been held up by a pair of Parker's Antbirds, the last remaining endemic we had not yet seen at Montezuma!

Though we were pressed for time, I ran back to the spot using his directions, and after a bit of playback and some tense moments, one of the antbirds appeared. They eventually decided to remain hidden in the undergrowth, calling occasionally. Success!

We made it back to the lodge with a few minutes to spare, and after packing up our stuff we headed over to the feeders to try some last minute photography. Many of the same species were present, and it was nice to finally grab some photos in decent light of these species.

The Violet-tailed Sylphs were a favorite of mine and I was happy to take some photos showing the brilliant colour of the back and tail feathers.

Hummingbirds were not the only birds at the feeder setup. A few Scrub Tanagers, Thick-billed Euphonias, Bananaquits and Flame-rumped Tanagers also made good use of the banana feeders.


We hit the road, prepared for a five or six hour drive through windy mountain roads. We hadn't even turned off of Montezuma Road onto a paved road when we came across the following scene. 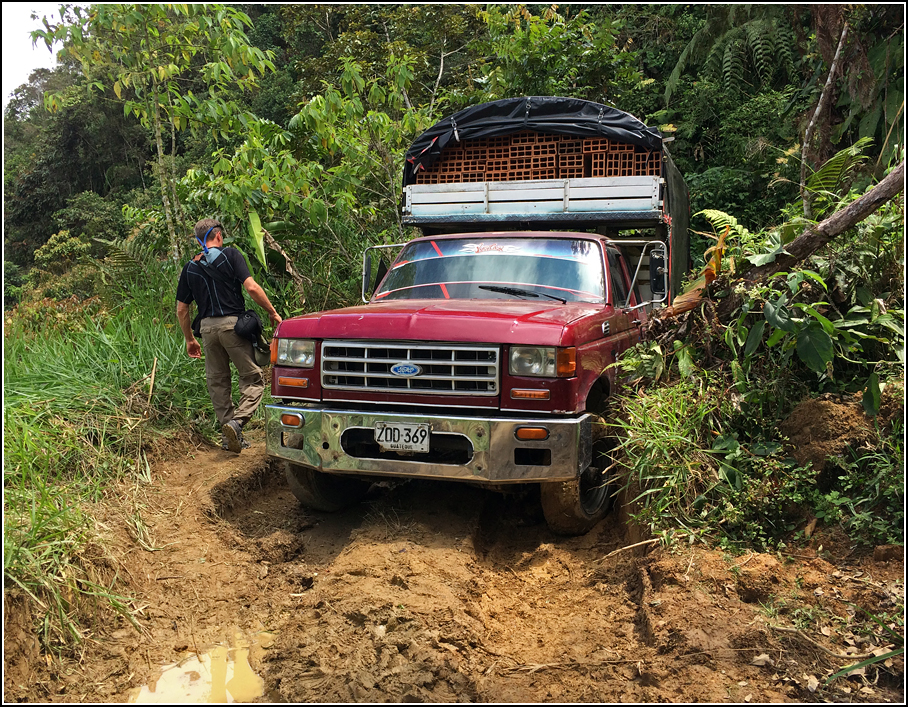 The truck was delivering a load of bricks to a house along the road when the young driver clipped the embankment alongside the narrow road, breaking his driveshaft. 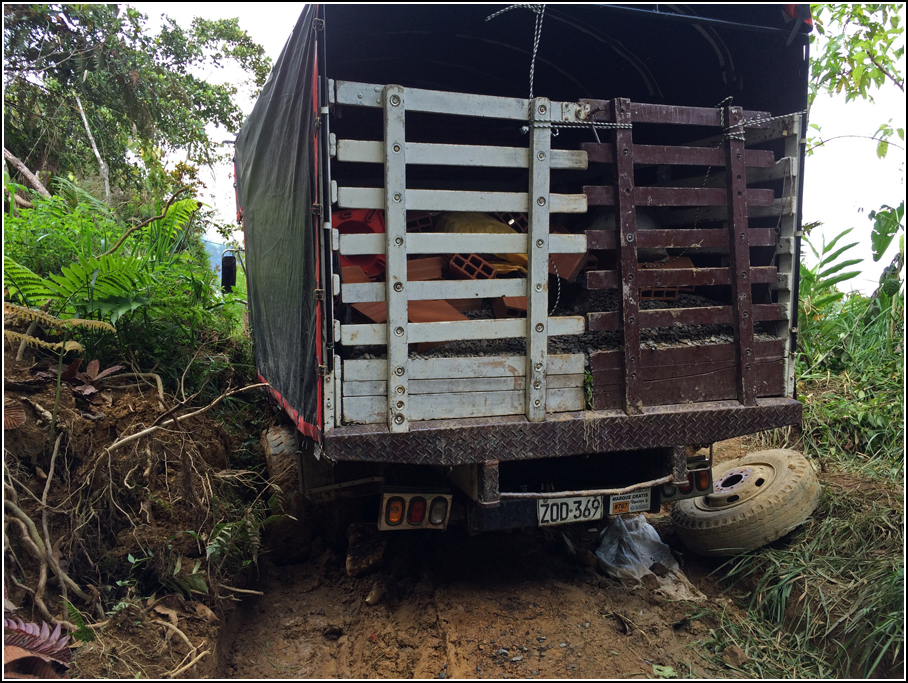 The road was completely blocked off, and the only way to clear it would be to move the disabled truck completely out of the way. Some guys from the nearby village drove up with a jeep, and tried unsuccessfully to pull the truck back with a chain. William tried pulling the truck forward up the road while the jeep pushed, but it would not budge very far as the truck was loaded with bricks and the road was muddy with limited traction. 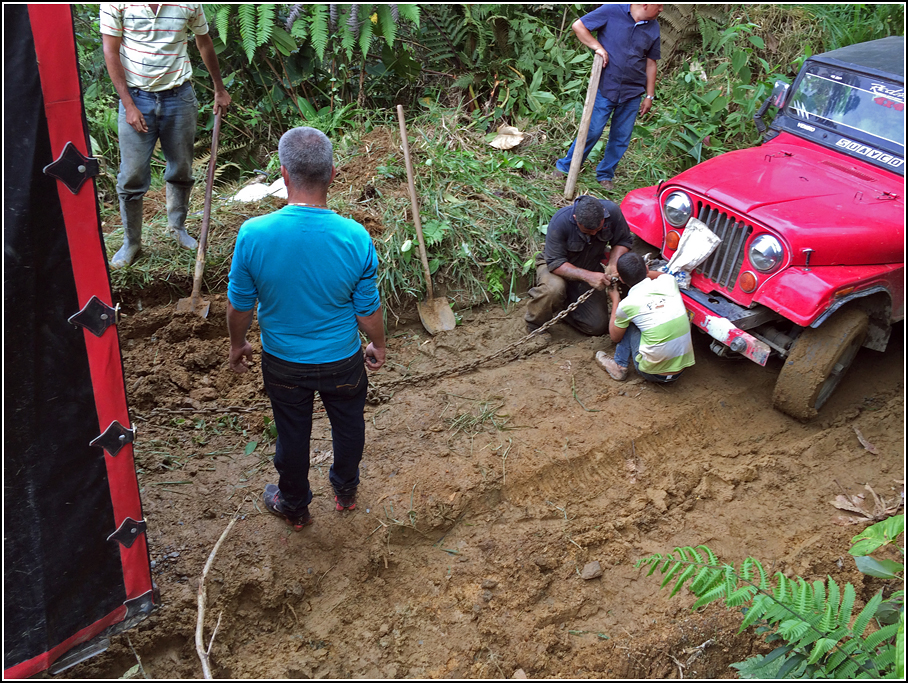 While we were waiting we had a couple of flyovers from an adult Black-and-white Hawk-Eagle - an awesome species, and our only sighting for the trip.

Despite the best efforts of everyone involved it did not appear like the truck would be moving any time soon. The only solution at this point was for all of us to hack away at the embankment with shovels and machetes to clear a route for the vehicles to pass through. It took several hours but finally enough of a path was cleared. 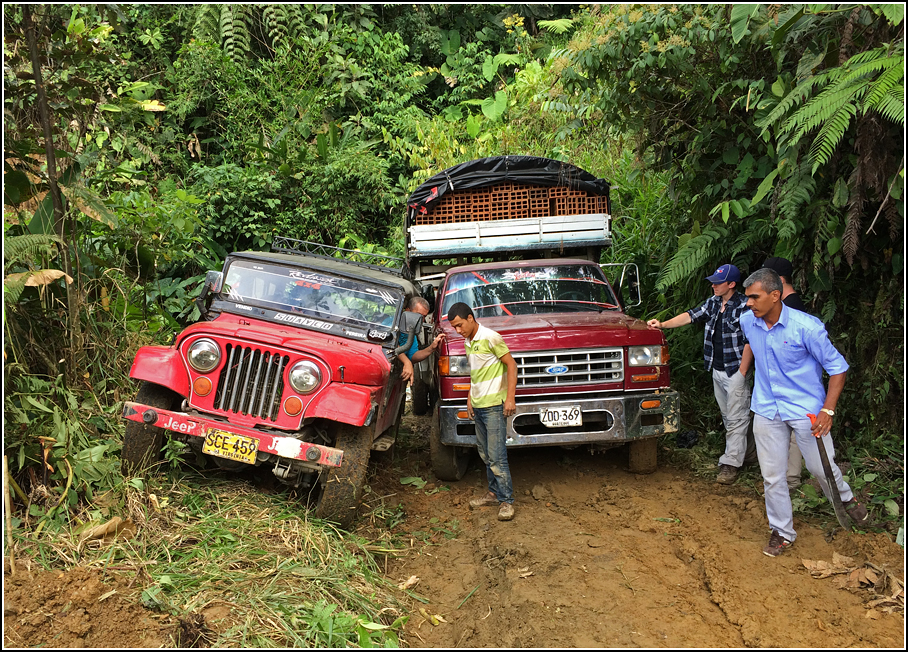 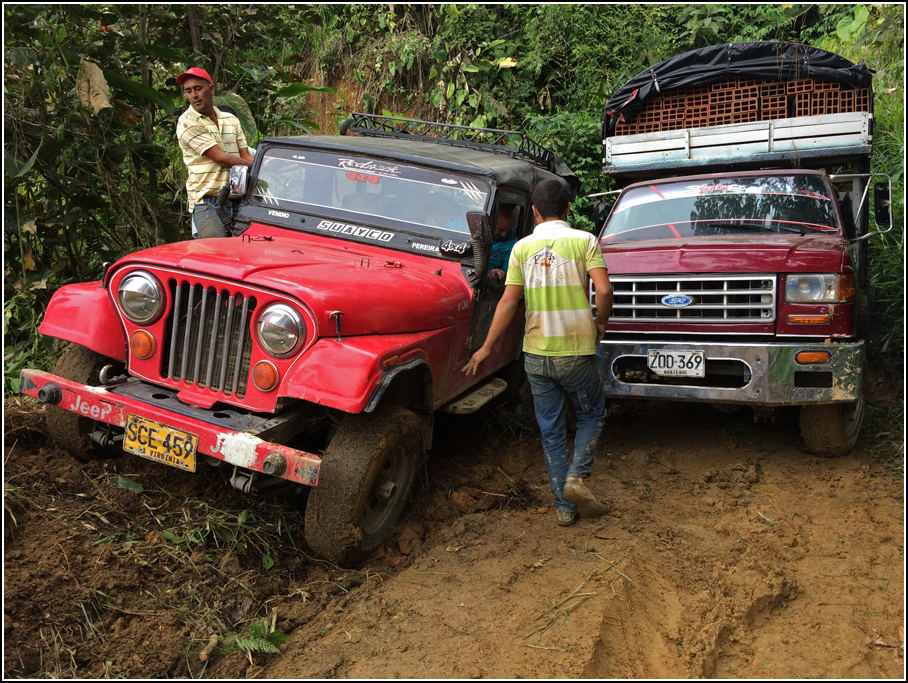 Finally, after a delay of three and a half hours, enough of a path was created for William to drive his SUV through, and we were on our way! 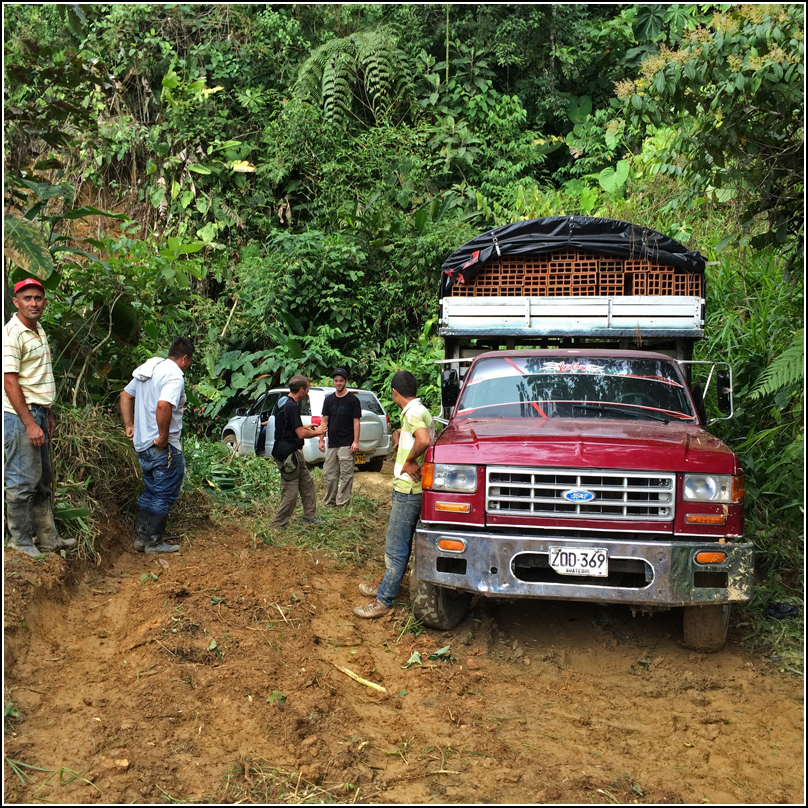 The delay had been costly in the sense that we would be arriving in Jardín well after dark, nixing our chances at visiting the Andean Cock-of-the-Rock lek. This was very disappointing, but what can you do! Traveling in the neotropics often comes with its challenges on the road, whether caused by accidents, landslides, or broken down trucks blocking the road. We had very little room for error with our tight itinerary, and we were fortunate that this was our only major delay that made us change our itinerary or miss a species.

We had one more bit of excitement that day. Well after dark, William took a shortcut on a gravel road which passed through a rural area that apparently was not very safe to be on after dark. Sure enough, the SUV had a flat tire, so we dug out our headlamps and Steve went to work helping William change the tire. To make things interesting, the car jack was jammed and would not go up high enough to lift the vehicle off the ground, but with a bit of improvising we piled a few large, flat rocks underneath, fixing the problem. 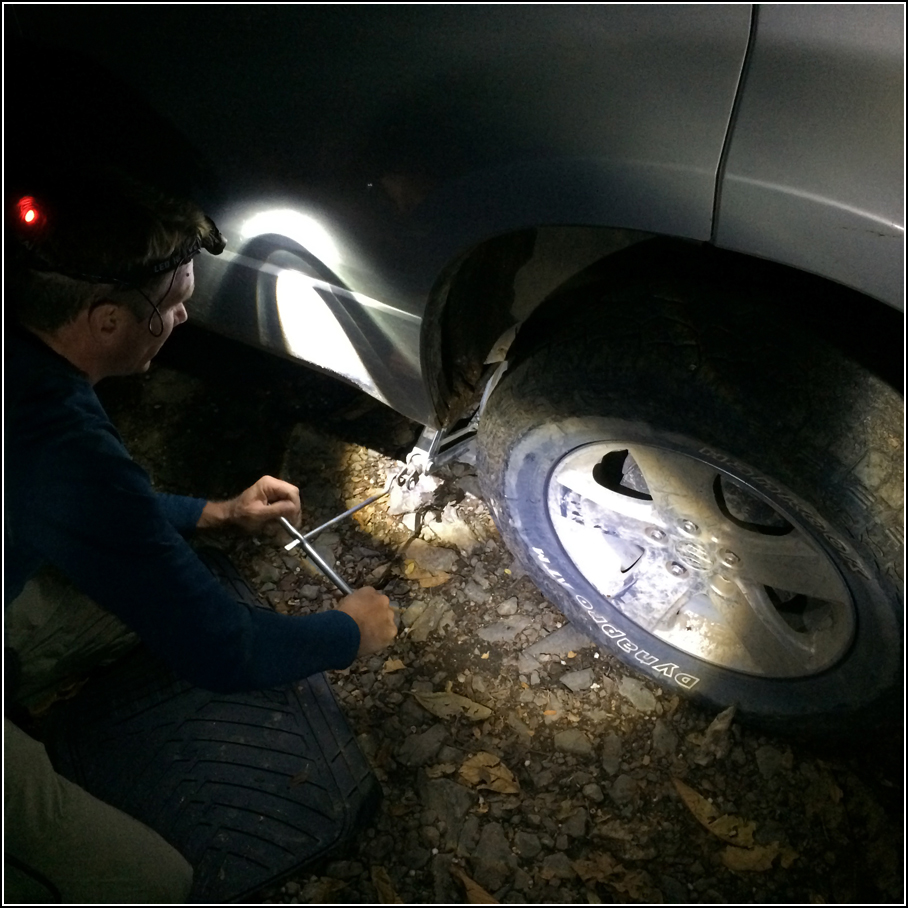 As this was going on, the vehicle suddenly beeped and closed up all the windows. William realized the keys were in the ignition, but it was too late as the doors were now locked and the windows closed. We were now stuck on the side of a sketchy road at night, hours from our destination, with a flat tire and the keys locked inside the vehicle.

We all breathed a sigh of relief when we realized that the trunk was still unlocked! William was able to crawl back inside and grab the keys, and needless to say they remained in his pocket while Steve finished up with the tire! But now we had a new problem: the vehicle's battery was dead. Fortunately we were on a bit of a slope and were able to push-start it, ending a very tense hour or so on the side of the road.

We rolled into the picturesque town of Jardín close to 10:00 PM and checked into our hotel without any further issues. It had been a long, tiring day but of course we had had a very productive morning, finishing our time at Montezuma Road with a few more of our target species. The following day we would do an early morning search for the Endangered Yellow-eared Parrot on the outskirts of Jardín, followed by a long drive to Río Blanco while making a few stops along the way.
Posted by Josh Vandermeulen at 19:00

You forgot that once we got the keys back his battery had died and we needed to push-start the car! Probably the best place to break down...

Oh yeah that's right!! Haha it was just not our day, eh?

Certainly the concept of a 'road' differs in some parts of the world, doesn't it! Fortunately everything turned out reasonably well. And nice shots of the various hummers, too.

Crazy! That's the way it works sometimes, but that day is definitely one for the annals.