Picking up from where I left off, the three of us had just embarked on the ferry that would transport us from Tierra del Fuego across the Strait of Magellan to the city of Punta Arenas.

Several Peale's Dolphins helped escort the ferry out of the harbour and into the deeper water. This range-restricted species is limited to the waters around the southern tip of South America but can apparently be locally common. After seeing Chilean Dolphin near Chiloe Island and Commerson's Dolphin the previous day on the ferry to Tierra del Fuego, this was our third species of dolphin in Chile.

We diligently kept watch for seabirds as we cruised through the productive waters of the strait. The winds happened to be rather low, limited the number of birds seen in flight, but we did have a few things here and there such as an estimate of 60 Chilean Skuas.


Seabird diversity was not great and we did not add any new species, but we enjoyed the decent views of large numbers of Black-browed Albatrosses, most of them resting on the water in loose flocks. By the end of the ferry crossing we estimated that we had crossed paths with over 500 individuals! White-chinned Petrel was the next most common seabird with around 300 observed, and we had our best looks so far of Southern Giant-Petrel.


That afternoon we birded the waterfront in Porvenir, finding a few Dolphin Gulls and a locally rare Red-legged Cormorant among all the Magellanic Cormorants. After some driving around we found a hostel; as you can see it was not one of the nicer places we stayed at! Yet it still cost around 80$ CAD... The following day we would drop off the rental car and hopefully board a bus bound for Argentina.

Up to this point in the trip everything had gone about as smoothly as one could expect but the next few days would change that.

It began with the return of the rental car in the morning. The entirety of the car's interior was coated with a thick layer of dust, one of the tires had a slow leak, the driver's door latch was broken and a slowly growing crack had materialized in the windshield. The dust was coming in through the floor pedals and air vents, the broken latch could be easily fixed, and the rental agency never noticed the leaky tire, but we were on the hook for the broken windshield. Fortunately the car was insured through my credit card but I had to cover the cost upfront, making sure I had all the correct paperwork to deal with the insurance company once I was back in Canada. Using Skype I was able to call the 1-800 number for my credit card to start the claim and we were soon on our way.  By the time we left the rental office and walked over to the bus station it was too late in the day to catch the only bus out of town towards the Argentina border. This was frustrating as it was still relatively early in the day, meaning that we had another 24 hours to kill in Punta Arenas, without a rental car to drive out of town.

We walked around town some more, unsuccessfully looked for a laundromat (apparently it takes 24 hours for laundry to get done at laundromats in Punta Arenas), discovered a pub for some lunch and found a hostel. 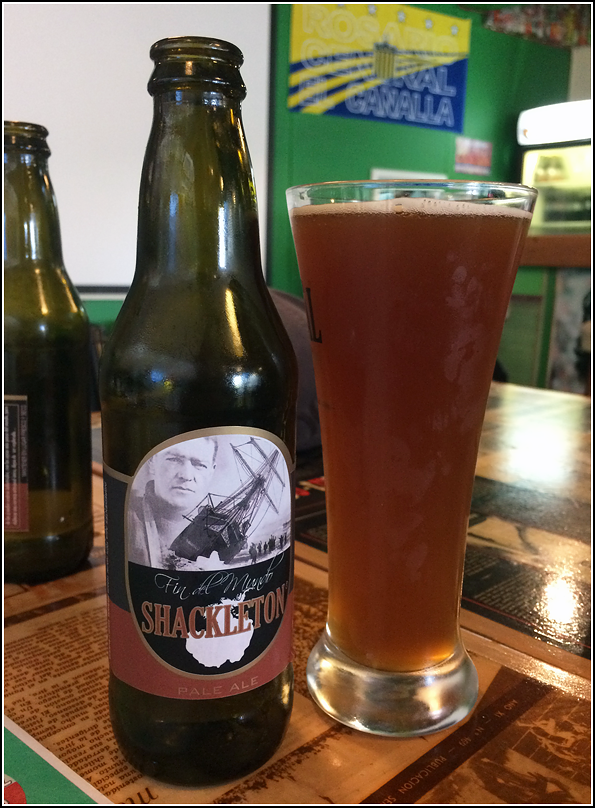 Several Dolphin Gulls were easily seen along the waterfront; it was some of the only birding we did that day. I'm a sucker for gulls and Dolphin Gull is one of my favorites!


Our plan for the next little while was to take a bus to Puerto Deseado, a location up the Argentinian coast where a Rockhopper Penguin colony could be accessed by boat. It would take several buses including an overnight bus and about 24 hours of time to reach Puerto Deseado, but there were no worthwhile birding stops between Punta Arenas and Puerto Deseado that we were aware of, so the penguin colony seemed like a worthwhile target. Our other option was to head inland and attempt a Hooded Grebe search but after some research we determined that it would take multiple days and be somewhat costly and complicated, with a very good chance we would still miss seeing the Critically Endangered species, so we set our sights on the Rockhopper Penguins instead. I will have to return to Patagonia at some point in my lifetime to see the Hooded Grebes, a species on the brink with less than a thousand individuals currently persisting in the wild.

The following day we walked over to the bus station and by 10 AM we were rolling out of town towards the Argentina border. We experienced a lengthy delay at the border and had a brief scare when it initially appeared that our bus had continued on without us - it had actually just parked around the corner - but soon we were back on track, keeping an eye out the windows for new birds for our incipient Argentina lists. By mid-afternoon we had arrived in Rio Gallegos, Argentina. With nothing to do all afternoon until our overnight bus departed, we grabbed a taxi and made our way out of town to look for a few new bird species that can be found in the area. In particular we were hoping for Patagonian Tinamou, but the strong winds (it is always windy in Patagonia!) nixed our chances.


That evening I checked out a lake near the bus station before we departed. As expected for the middle of the city there was not too much of interest, but the Red Shovelers and Yellow-billed Pintails were a nice study in the evening light.

Today was a bit of a write-off and our third consecutive day without any new birds, or really any birding to speak of. It began when we were dropped off by bus around 2 AM at the side of the highway near the road leading to Puerto Deseado. We were under the impression that there was a bus station here, where we would simply wait for a bus to take us into town, but it turned out that there was nothing more than a gas station and a few houses. Fortunately the gas station was open so we had somewhere to hang out, and luckily the owner knew that another bus would be coming by later in the morning that could likely take us into Puerto Deseado. The bus did indeed show up and by late morning we had rolled into our destination.

First order of business was to walk down to the docks to see if we could hop a ride to the penguin colony. Unfortunately it was too late in the morning to catch the only zodiac, and it had been cancelled anyways due to the high winds. We ended up spending the rest of the day bumming around town with not a whole lot to do. Due to the constant high winds and blowing sand during the day, the town took the appearance of a ghost town, only missing the proverbial tumbleweed blowing down Main Street. But by nighttime the place came alive. The winds die down every evening and everyone comes out of their houses. One of the positive memories I have of this day was the hotdog I bought from a roadside vendor - the best one of the trip!

We walked over to the docks shortly after dawn to see if the zodiac would be running. The light winds seemed promising and we were soon reassured that the conditions were suitable and everything was a go! 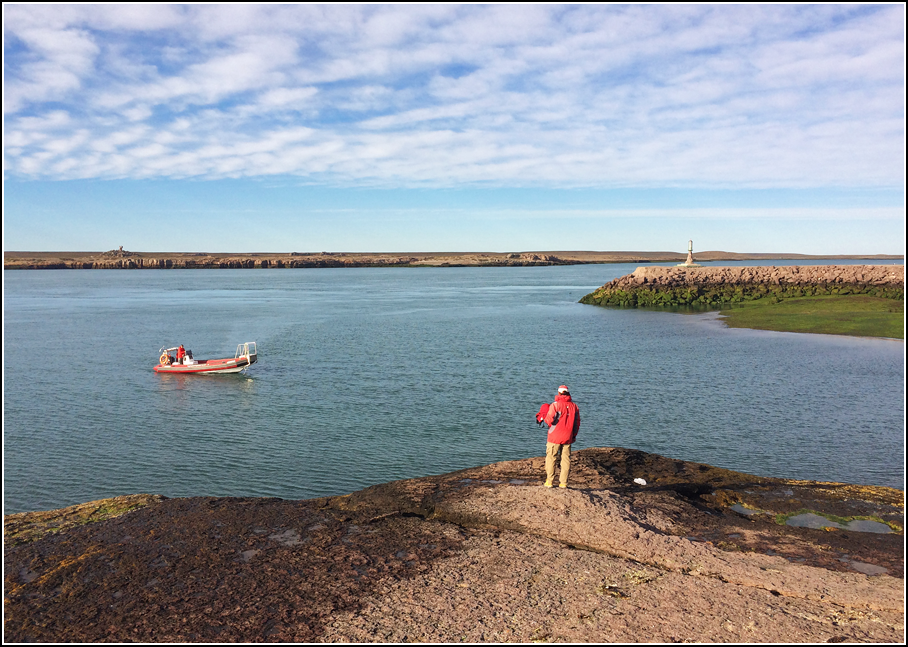 While we waited to board the zodiac we enjoyed studying the Southern Giant-Petrels that were circling the harbour.


Shortly after 8 AM we were off! The plan was to follow the coastline to the south for about 20 km until we were near the Rockhopper Penguin colony, located only 2 km offshore. There were about 10-12 of us on the zodiac along with the skipper. Things started out well even while the winds picked up as we exited the natural harbour. We soon came across our first Brown Skuas - finally, a new species after three days of striking out! The skuas followed the boat for a few minutes, one individual coming within only a few meters of us. 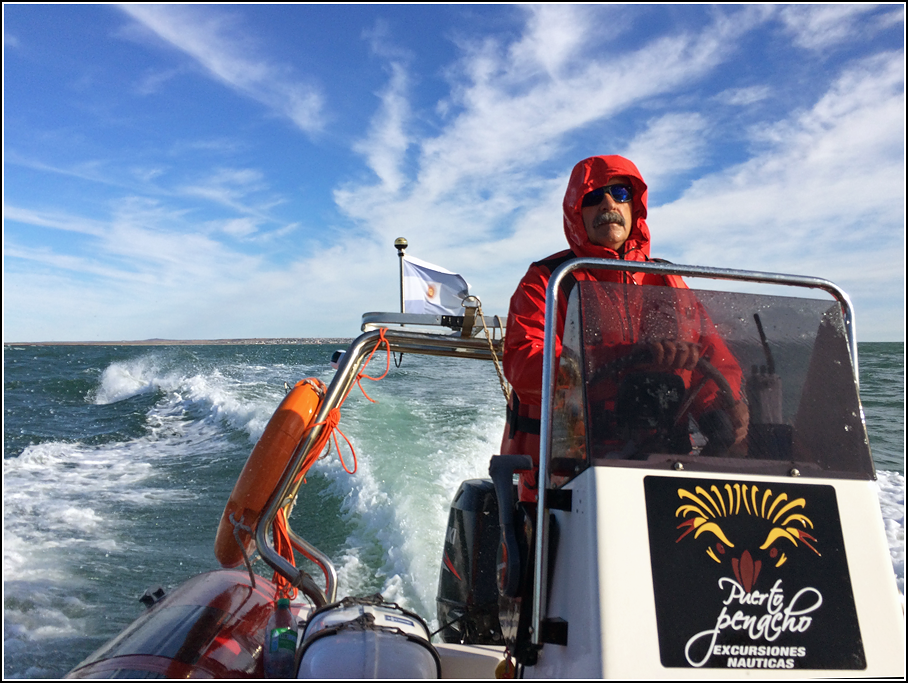 As we continued along, the winds became stronger and the swells larger but we pressed onwards. Eventually the waves were high enough that they began crashing over the side of the zodiac, completely drenching everyone on board, over and over again. I borrowed two raincoats from the captain and used them to wrap up my camera, before jamming it under my arm and hoping for the best. This continued for what seemed like the better part of an hour until we finally reached the relative shelter of the bay across from the island containing the penguin colony. Despite being so close, the captain made the decision to abort the mission and return back to the harbour as the open water crossing to the island would be too dangerous, and the conditions meant that the usual landing spot was not accessible to the zodiac. Dave, Adam and I scrutinized the island with our salt-encrusted optics, straining for a glimpse of a Rockhopper Penguin (it would be better than nothing). Unfortunately we could not pull one out given the 1 km+ distance.

The ride back in the zodiac was harrowing to say the least and we all hung on for dear life while the strong waves crashed overboard with even greater force. Several of the other tourists on the boat started to become near-hysterical, while another little girl shivered uncontrollably and vomited in the boat while her dad tried to keep her warm. At this point in the boat ride the collective fates of our cameras were the least of our worries, but the thought still played heavily on our minds.

Eventually, like a beacon in the night, the harbour appeared in the distance and I think we all breathed a sigh of relief as we approached the dock with the promise of dry land. It had been quite the ordeal but at least no one had washed overboard! Somewhat unbelievably our cameras were OK, though Adam dropped his on the rocks as we were exiting the boat which caused some damage. Salt water managed to seep into one of the barrels of my binoculars; the rest of the trip I was essentially birding with one eye.

We dried ourselves off while our first Southern Martins flew overhead and began to plan our next move. Considering that there would be no guarantee that the boat trip would run the next day we decided to cut our losses and get out of Puerto Deseado. We accepted defeat and by 5 PM that afternoon had boarded a bus which would take us far up the coast, to the Valdes Peninsula where a new suite of birds awaited.

Posted by Josh Vandermeulen at 17:40