Our bus rumbled along a lonely Patagonian highway through the night, taking us northeast towards the Valdes Peninsula. The first rays of morning sun illuminated the countryside as we approached our destination of Puerto Madryn. Paying close attention to the bird-life out of the windows of the bus proved successful, as I spotted a Patagonian Tinamou in the roadside grasses.

After relying on public transportation and enduring long overnight bus rides, we were happy to rent a car for our three days that we had planned for this part of Argentina. The previous few days had been a little rough with few birds for our efforts, so this leg of the trip was a fresh start for us. While waiting for the rental agency in Puerto Madryn to open, we killed some time by enjoying a much needed coffee at a beach-side cafe.


The car rental process went smoothly and by mid-morning we hit the road, eager to bird the shrubby habitats and coastlines of the Valdes Peninsula. Being in a new part of the country meant that a novel suite of birds could be found alongside many of the species that we had already amiliarized ourselves with earlier in the trip. One of our first new birds was the Elegant Crested-Tinamou, proving to be quite common along the roadsides as we began our drive into the Valdes Peninsula. They did not appear to have a lot of street smarts and we saw several freshly hit individuals on the side of the road. One benefit to their boldness is that it made photography much easier!


Dave contemplated turning this recently deceased Elegant Crested-Tinamou into lunch, but thought better of it.


The Valdes Peninsula has an array of scenic beaches, high-relief topography, tall cliffs and an abundance of marine life in the surrounding waters. It has been declared a UNESCO World Heritage Site, specifically due to its significance as a breeding ground for Southern Right Whales, but also due to its large colonies of Southern Elephant Seals and Southern Sea Lions. One of our first stops was a cliff overlooking a Southern Sea Lion colony on the beach below. The sights (and sounds) provided an interesting spectacle.

A white, gull-sized bird can be seen in the image above. It was one of three Snowy Sheathbills that were loitering among the sea lions. Found only in southern South America, Snowy Sheathbill has several claims to fame; one being that it is the only landbird found on the Antarctic Peninsula. They can eke out an existence in the harsh environment by subsisting on such delicacies as downy penguin chicks, stillborn seals, tapeworms, carrion, and animal feces.


Only two species of sheathbills can be found in the world. There is still some debate as to the taxonomic relationships of sheathbills and other birds, but at the moment it appears that they are more closely related to the thick-knees and the Magellanic Plover. We kind of figured that we would not be seeing Snowy Sheathbill after the cancellation of our visit to the Rockhopper Penguin colony, so watching three of them here was a treat!


The adult males can grow to 9 feet in length and weigh up to 770 pounds, while the females are usually less than half of that. Impressive animals, to say the least!

The Valdes Peninsula is home to several species of mockingbirds, including Chalk-browed and White-banded, two species which were new to us. The only mockingbird I happened to photograph was the ubiquitous Patagonian Mockingbird.


We continued driving around the island, stopping whenever an interesting bird appeared on some of the vegetation next to the dirt roads.


Patagonian Canastero and Lesser Shrike-Tyrant, two relatively drab species that stuck to the scrubby vegetation, were new species for the three of us. Both of these species are endemic to Argentina; however, the Lesser Shrike-Tyrant is considered a breeding endemic as it migrates north to Bolivia and Paraguay during the austral winter.

At one point we exited the car to explore some of the surrounding countryside on foot.


We noticed a pair of mammals off in the distance that almost looked like overgrown hares; a closer look and photographs revealed them to be Patagonian Maras, a species of rodent endemic to Argentina.

A pair of Band-tailed Earthcreepers skulked in the vegetation near the car. One popped up onto a fence post, providing great views and a brief photo op. We had previously observed a single individual of this range-restricted species while in the Sierra Baguales in Chile a few days earlier.


In the early evening we departed the Valdes Peninsula after a successful day in the field. As the sun lowered in the sky to the west we turned north up Highway 3, passing through endless scrubby fields towards our destination of Las Grutas and San Antonio Este. After approximately three hours we were within striking distance of Las Grutas, so we pulled off on a random sideroad and set up camp along the roadside. I laid out my air mattress and sleeping bag on the sandy ground under the starry sky, and quickly drifted off to sleep.

Early the next morning we were eased back into consciousness by a variety of bird songs. Some were familiar, like the omnipresent Rufous-collared Sparrows and Patagonian Mockingbirds, while others were new, such as the pair of endemic Carbonated Sierra-Finches.

Our goal for the day was to bird a road that passes by several washes/creek valleys just south of Las Grutas. The washes provide water and shelter for a great variety of birds and it was our hope that today would be a big day, full of new species. All told, we tallied just under 50 species, including 16 "lifers", during a thoroughly enjoyable morning of birding.


White-throated Cacholote, an Argentine endemic, was one of our first targets to fall. Cacholotes are yet another species of Furnariid, being somewhat related to the spinetails, tit-spinetails, and canesteros, among other species.

This Straneck's Tyrannulet provided great looks as it called from within a thorny bush.


Variable Hawks are the default Buteo in this part of Argentina.


Stripe-crowned Spinetails proved to be somewhat common along the roadsides, with several providing excellent looks as they called from the tops of thorny bushes.


This Yellow-billed Tit-Tyrant was also new for us. It looks quite similar to the Tufted Tit-Tyrant, the yellow bill being the dead giveaway that it is a different species.


Birds were not the only items of interest that we came across. A big highlight for me was encountering this Chaco Tortoise out and about.


Chaco Tortoises are found in parts of Argentina, Paraguay and Bolivia. Though they are still found to be reasonably common in some areas, this species is listed as Vulnerable according to the IUCN red list, in part due to habitat loss but primarily from illegal capture for the pet trade.

As the morning progressed we began to see a negative correlation between the temperature and the frequency of bird sightings. However new species kept turning up including Greater Wagtail-Tyrant, Blue-and-yellow Tanager, Black-crowned Monjito, and White Monjito, as pictured below. As you can see the heat haze was playing tricks by this point in the morning. 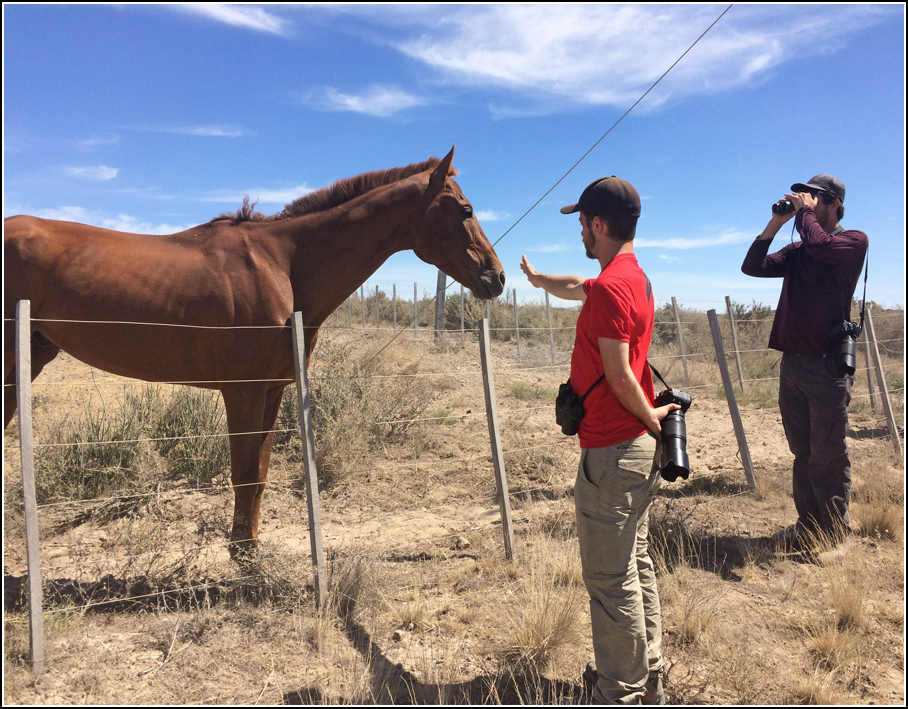 The last new bird was a calling Sandy Gallito that Dave heard; unfortunately Adam and I were not so lucky and it refused to call again. Missing an endemic bird is never fun, but you can't get them all!

With the sun high in the sky we made a stop in town for lunch, then continued driving east to a location with recent eBird sightings of Yellow Cardinals. The temperature was above 30 degrees Celsius by this point and the cardinals did not cooperate. These Burrowing Parrots provided a dash of colour in a landscape otherwise painted with drab browns, yellows and greens.


Common as they may be in this part of Argentina, it was pretty hard to get sick of this charismatic species.


We backtracked along the highway and explored the coastline near San Antonio Este for a few minutes in the mid-afternoon. Our main goal was Olrog's Gull, an uncommon species found predominately in a stretch of coastline between Uruguay and southeastern Argentina. While we could not turn up any Olrog's Gulls, we did enjoy the Sandwich Terns, Two-banded Plovers and various plumages of Kelp Gulls.

As the afternoon turned into evening the hot temperatures subsided, and we focused our attention on a stretch of road, Highway 52, perhaps 50 km east of San Antonio Este.


This proved to be a productive birding road and in the two hours we spent along here we tallied 42 species. A group of Greater Rheas provided one of the first highlights, while we also observed Green-barred Woodpecker, Campo Flicker and Fire-wood Gatherer (a boring looking Furnariid with an awesome name).


Hudson's Black-Tyrant is an Argentine breeding endemic which winters northward, reaching Paraguay and Bolivia. It was good to cross paths with some; we were getting a little worried that we would miss this species.


Burrowing Parrots are not the only type of bird to take advantage of the sandy soils in this region; Burrowing Owls are also widespread and frequently observed.

A pair of Ringed Warbling-Finches materialized while we were looking at the Hudson's Black-Tyrants. Later on we heard a Cinnamon Warbling-Finch, but it remained out of sight, unfortunately.


With evening closing in we backtracked to the west, arriving in San Antonio Este just after sunset. Our last new bird of the day was a Nacunda Nighthawk flying around as we entered the city limits. That evening we found a room in a hostel, went for a walk to find some empanadas and beers for dinner, and relaxed at the hostel for a couple of hours before calling it a night.
Posted by Josh Vandermeulen at 11:26