It was hard to believe, but I was down to my last two days in Argentina. These trips always go by too quickly!

Buenos Aires is one of the most populous cities in the western hemisphere. Its metropolitan area contains between 13 and 17 million people depending on the criteria that are used, making it the fourth or fifth largest metropolitan area in the Americas behind São Paulo, New York City and Mexico City, and possibly Los Angeles.

Since I was flying out of Buenos Aires anyways, we decided that it would be easiest to just stay in the city for two nights as opposed to renting a car to leave the metropolis. One factor behind our decision was the presence of a large man-made ecological reserve that had been built along the waterfront, known as Reserva Ecológica Costanera Sur.

While popular with joggers and other pedestrians, the many trails weaving through the reserve and the abundant tall trees and diverse environs provide habitat for a wide range of species. Currently the eBird hotspot for the reserve has 341 species listed, many of which would be new for us due to the much different ecozone surrounding Buenos Aires.


Our hostel was located a short walk from the entrance of the park and by 7:30 AM we were coming across new species around every bend!

A marshy canal separates the park from the city. Ducks, wading birds, coots, grebes and more were easily observed from the adjacent promenade, and within minutes we had seen our first Silver and Ringed Teals and White-faced Whistling-Ducks.

We returned to the hostel by mid-afternoon, happy with our extremely productive morning of birding. That evening we hung out with some of the other travelers staying at the hostel and experienced our only Argentine Asado of the trip - better late than never! We splurged on some decent wine and enjoyed our last night together in Argentina.

After a somewhat delayed start to the morning we returned to Reserva Ecológica Costanera Sur, hoping to add a few more species before I needed to depart for the airport.

Certainly one of my highlights from the morning was observing a few Southern Screamers. While not a particular uncommon species over most of its range, this was my first screamer of any species.


Hummingbirds are absent over much of the area we covered during this trip. Feeling a little bit hummingbird-deprived we enjoyed the numerous Glittering-bellied Emeralds as well as a single Gilded Hummingbird.


Exploring the reserve proved successful on our second day. New species for us included two Solitary Black Caciques, a few Sulphur-throated Spinetails, a distant Brown-and-Yellow Marshbird, and a pair of confiding Black-backed Water-Tyrants.

Tiger-herons never fail to disappoint. This Rufescent Tiger-Heron was roosting in a tree at eye level, providing incredible views.


With our stomachs rumbling we returned to the concrete promenade that lined the canal separating the park from the rest of the city. A number of food trucks were set up which we took full advantage of! Best sausage on a bun that I have ever had, complete with dozens of toppings including a variety of different salads. 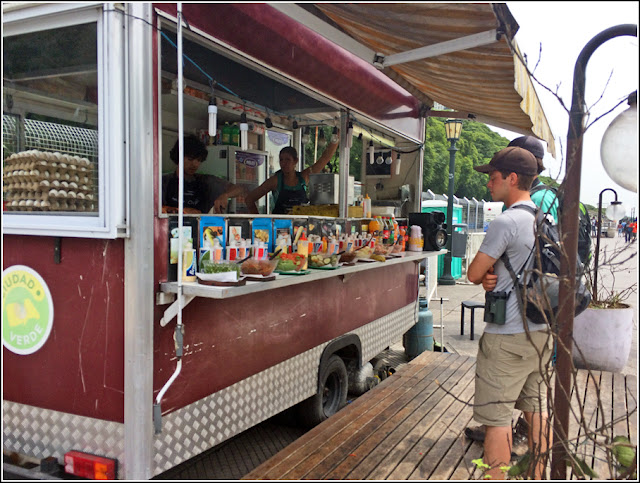 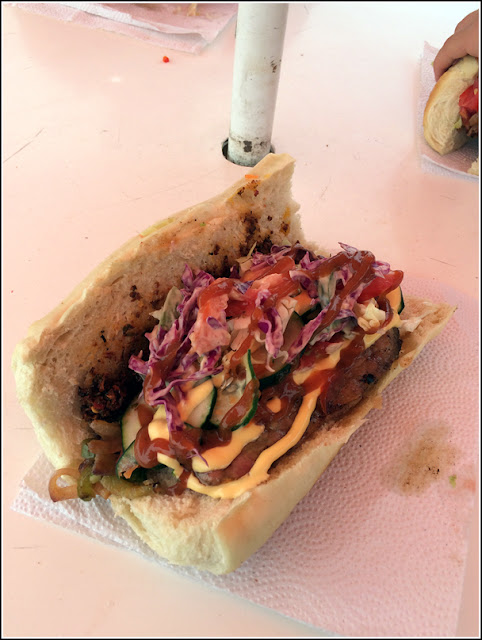 This Argentine Black-and-White Tegu was cruising along the edge of the canal, likely looking for something to eat. A pretty impressive species to see in such an urban setting!


One of the guys (I can't remember who) made a great spot with this Stripe-backed Bittern, skulking along the edge of the marsh canal, as we scanned from the adjacent promenade.


Even though it was around noon the overcast conditions were not terrible for photography.  The most common species were Rosy-billed Pochard, Silver Teal, White-faced Whistling-Duck and Yellow-billed Pintail, but we also found Brazilian Teal, Ringed Teal, Masked Duck and a pair of Fulvous Whistling-Ducks. The Fulvous Whistling-Ducks were a long overdue life bird, the very last of the trip for me.


Guira Cuckoos are hard not to like. Something about their boldness combined with that hairdo!

With the clock ticking it was time to call it a day since I had a flight to catch. Dave and Adam would continue on for the next month-plus to see more of what Argentina had to offer, but I had to return back home (the joys of a full-time job!).

For those scoring at home, we finished with over 330 bird species as a group, of which I counted 327. The 210 species in Argentina narrowly eclipsed the 201 found in Chile. All told I added 245 life birds, or roughly 3/4 of all the species we observed.

The trip was awesome, filled with incredible highs contrasted with some lows, but overall it was everything we could have hoped for. I am sure I will be back at some point in the future!
Posted by Josh Vandermeulen at 09:31