A few weeks ago, Todd Hagedorn joined me for a weekend of birding in southwestern Ontario. It had been several months since my last visit to Point Pelee, and it hadn't been a very good time. During that trip I spent about 2 hours in the Point Pelee area before I had to leave, and I unfortunately "dipped" on the Wood Stork that had been seen for two days, up to about five seconds before my arrival. It really is pretty incredible how close I came to seeing that  bird and still missed it. If you are feeling down, or enjoy other people's tales of misery, feel free to ask me about it sometime! :)

Needing to wash the taste of the last trip out of my mouth I was eager to get down to Point Pelee for a weekend of birding. Our first stop was not Point Pelee, but Bate's Subdivision outside of Rondeau Provincial Park. Jim Burk, one of the several sharp local Rondeau birders who seem to be constantly out looking and finding rarities, discovered a gorgeous Townsend's Warbler on November 11, a species with only nine accepted records for Ontario. In the days since, its routine had been nailed down and Todd and I were hoping to cross paths with this scarce western warbler.

The morning was calm, sunny and relatively warm for the date. Todd and I slowly walked the side streets throughout the subdivision, searching through the abundant red cedars in the heavily wooded subdivision, on one occasion making pleasant small talk with one of the residents here. The Townsend's Warbler had become a local celebrity and she was curious if we had caught up with it yet. It is great to see situations like this. All of the previous birders had respected people's private property and kept to the public roadways, leading to positive vibes between birders and the residents of the quiet subdivision. Much of this is due to the work done by Steve Charbonneau, Jim Burk and some of the other local birders.

The Townsend's Warbler was a little slow in appearing this morning but there were many other birds to look at. During a lull in our searching we walked out to the lake side of the peninsula to search through the big flock of geese that had been assembling there over the past days and weeks. Lev Frid had discovered a Ross's Goose with the flock a few days earlier and it was still present, along with an adult and immature Snow Goose.

A Blackpoll Warbler had also been found in Bate's Subdision by several keen birders searching for the Townsend's Warbler. This species usually has vacated the province by the middle of October so to see one in late November is a bit unusual. At one point we caught up with the Blackpoll, hanging tight with a few Yellow-rumped Warbler friends.


After searching for well over an hour an unusual chip note caught my attention while Todd and I walked near the intersection of Second and Center Streets. It had to be the bird! A few seconds later Steve Charbonneau, who was across the intersection from us, called out that he had the Townsend's! It took a few seconds of searching before I saw it, sitting quietly in a deciduous tree. It instantly took to the wing and flew over us, disappearing far to the north. Well, at least we saw it!

Over the next hour various birders came and went but the Townsend's Warbler was playing hard to get. On several occasions I heard the bird call but it was sticking deep to the red cedars and very difficult to see. Finally our patience was rewarded and the bird fed slightly more in the open. I only managed one identifiable photo the entire time - it was difficult!


Some of the group searching for the warbler.


Todd and I continued southwest, stopping at Shrewsbury and Wheatley harbour, though we couldn't turn anything too unusual up. As we were driving in the "onion fields" towards Point Pelee we flushed two meadowlarks alongside Mersea Road 19. Both appeared to be Easterns, as far as we could tell.


The day had become quite gloomy at this point and a walk around DeLaurier failed to turn up much of anything as the darkness ascended. We called it a day and headed back to Leamington where we were staying with Jeremy Bensette.

Todd and I were a little slow on the draw on Saturday morning and by the time we stationed ourselves at the Tip, the crack team of Jeremy Hatt, Steve Pike, Blake Mann and Mike Nelson had already found a Pacific Loon! It refused to show for Todd and I but we enjoyed a decent waterbird flight. Red-throated Loons in particular were around in good numbers while we also tallied a few of the unusual-ish ducks, such as Black and Surf Scoter and Long-tailed Duck. Unfortunately the forecast rain came in with a fury, effectively ending our day just before lunchtime. Todd and I enjoyed hanging out with Jeremy and Steve for a while, then birded on our own, but the relentless rain did not help at all.

Sunday morning was our last chance at birding in the southwest before we needed to make our way home. Strong northwest winds were forecast so instead of trying our hand at birding at the Tip we thought we would bird along the lakeshore, hoping to see some late migrant raptors. Our goal was also to leave at an early enough hour so that we would have time to search for the Mountain Bluebird found by Anthony Vanderheyden in Waterloo. This would be Jeremy's record-tying bird for his Ontario Big Year.

A short vigil at the end of Zion Road failed to turn up any migrant raptors, though a few flyover Lapland Longspurs were nice to see. It was still early in the day but time was of the essence and we had to keep moving. Near Port Alma we observed a flock of 27 Sandhill Cranes migrating. They are one of my favorite bird species in Ontario and I always enjoy seeing them. We also caught up with a massive flock of blackbirds containing at least 1000 Rusty Blackbirds, a good number for this species whose numbers have been dropping quickly.

At Erieau we finally caught up with the male Harlequin Duck, an individual that had returned for its third winter. I think this is the first Harlequin Duck that I have seen on Lake Erie.  A Snowy Owl, the harbinger of many to come this winter, was in the furthest east field along Erieau Road, opposite McGeachy's Pond.

Our next stop was the Ridgetown Lagoons, a favourite spot of mine that seems to turn up unusual birds more often than not. Luck was on our side once again and soon after arrival I picked out three tiny Ross's Geese tucked in with all the Canadas.

Ten cute little Cackling Geese were a fun study as they stood on a near berm with a big flock of Canada Geese. Two are visible in the photo below.


We finished our weekend by searching for the Mountain Bluebird in Waterloo. Luck continued to be on our side and not only did we view the bird well but it cooperated for photos. I wrote about this bird in a previous post (http://joshvandermeulen.blogspot.ca/2017/11/mountain-bluebird-ties-record.html) but I will add one more photo here. It was a good way to end the weekend! 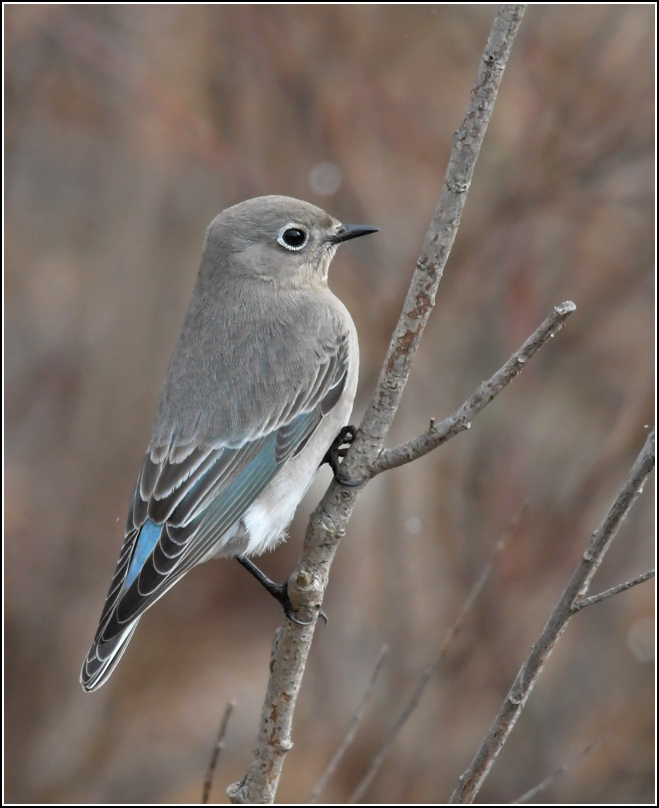 Posted by Josh Vandermeulen at 09:47

Good to see you down this way that weekend. Too bad it rained on the Sunday!

Haha - that's why I always double check any post I make to the listserv for autocorrect errors.