Relaxing Days on the Pacific Coast of Costa Rica

When Laura and I put together the itinerary for my parents' visit, we tried to fit in a variety of activities and planned to explore a diversity of areas in Costa Rica. A trip to Costa Rica would not be complete without some beach time. Following several days in the jungles of La Selva, our next two nights were spent in the town of Jacó on the Pacific coast.

Jacó is a popular beachside town known for its surfing, dining and nightlife. Tourism is very popular here and the volcanic, black sand beach is a frequent hangout for surfers, families, honeymooners and other sun-seekers. We had rented an apartment through AirBnB in Jacó for two nights; it was located about a three minute walk from the beach. Laura and I usually do not spend much time relaxing near beaches when traveling but I have to say that this was a nice diversion! We tried to unwind, a somewhat difficult proposition due to the quickly escalating concerns about Covid-19 around the world. Once our flights home were booked, this was somewhat easier to manage. Laura and I were coming to grips with the fact that our world travels would be temporarily put on hold; of course, at the time we did not know or anticipate that it might be a year or longer until we could resume them. Ignorance is bliss. 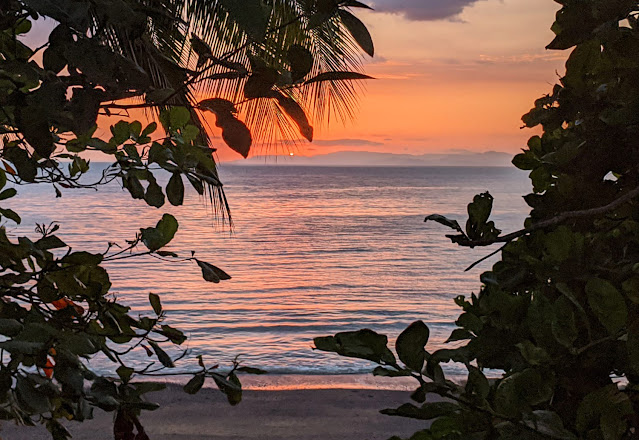 During the afternoon of our first full day we went for a drive up the coast. Our destination was a particularly famous bridge - Puente Río Tarcoles - which is famous for the large numbers of American Crocodiles which can be seen loafing along the banks of the river. We parked next to the bridge and spent the last hour and a half of the afternoon scanning for birds and other wildlife.

Despite being situated along a busy road, we noted quite a lot of wildlife from the bridge! My eBird checklist eclipsed 60 species.

A gaggle of male Great-tailed Grackles were putting on quite the show, trying to catch the eye of a nonchalant female, perched nearby.

The crocodiles were easy to find since at least a half dozen were within a few dozen meters of the bridge. During our afternoon vigil, dozens of tourists stopped at the bridge to check out the crocodiles. I don't think many of them noticed the large diversity of waterbirds and other species that were also around.

Most of the "expected" waterbirds could be found, such as these comical Purple Gallinules. We also noted five species of shorebirds, a flock of Black-bellied Whistling-Ducks and a single Muscovy Duck.

Anyone who has visited this part of Costa Rica before can likely attest to the large numbers of Scarlet Macaws that inhabit the area. These impressive macaws are often heard long before they are seen, but they are impossible to miss visually as well. We counted at least eight pairs during our brief afternoon stakeout of the bridge. The Scarlet Macaws of the Pacific coastline of Costa Rica is a conservation success story.

Scarlet Macaws used to be widespread in the lowlands of Costa Rica, on both the Caribbean and Pacific sides of the country. They experienced drastic population declines, partially due to capture for the pet trade. Due to the conservation work of a few dedicated groups, numbers of this beautiful species are slowly beginning to tick upwards on the Pacific slope.
Motmots are among my favourite birds. I love watching them hunt and interact, and they exhibit interesting nesting ecology - excavating tunnels in the side of a riverbank or cliff, much like a kingfisher. It also helps that most species are stunningly beautiful.
I spotted a pair of Turquoise-browed Motmots alongside the bridge while I was off birding with my dad. We enjoyed excellent looks at this species which is, in my opinion, one of the more spectacular motmots. Laura and my mom were at the other end of the bridge but they were able to return in time to enjoy these birds as well.

We drove back to Jacó, stopping at a nearby beach to catch the last of the sun slipping over the horizon. The end of another day in paradise. The world was quickly undergoing lockdowns in many countries, and in Costa Rica things were starting to shut down as well. But that evening, it was easy to forget about the chaos and uncertainty for a few moments as we observed Scarlet Macaws and Turquoise-browed Motmots and experienced a beautiful ending to another day.
I had very few targets birds in this part of Costa Rica, meaning that I could relax throughout our time in Jacó. The one new species that I had a chance at finding was Pacific Screech-Owl. This species is found only on the dry Pacific coast from Oaxaca, Mexico to northwest Costa Rica but seems to be reasonably common within its range. I had never run into this species when birding Guatemala, the only other time that I was in the right area. I resolved to find this species the next morning and set my alarm for 4:30 AM.
The sky was dark as I left the apartment and ten minutes later I had reached my destination - an eBird hotspot known as Humedales Quebrada Bonita. This mosaic of agricultural fields, scrub, and wetlands holds a high diversity of species. My target species had been eBirded there recently so I was hoping for the best!
I checked a few forest remnants close to the road. The sky was lightening very quickly and the dawn chorus was already beginning. I had to hurry if I wished to find a screech-owl! It took a little bit of effort, but eventually one responded to my playback. It refused to make itself seen however. Even more fortuitous, I found a single Striped Owl and managed excellent looks in the dim pre-dawn light! This was a species that I had only seen once before, flying over the Panama Canal in 2014.
I turned my attention to other birds once the sun began to creep above the horizon. Disturbed areas often hold a surprising number of species and it is easy to rack up a large list. While high quality forest holds many more species, those forests do not give up their secrets easily and many visits are required if one wishes to see this diversity. Quite the opposite in disturbed areas!
The presence of the wetlands meant that birds from several different ecosystems could be found here. It was difficult to keep up with the many new sightings! The first couple of hours around and after sunrise are, by far, the most productive hours of the day and I worked quickly to see as much as possible. By mid to late morning, the hot dry air puts an end to the frantic morning bird activity in this region of Costa Rica.

I noted my third owl species of the morning by observing the behaviour of some agitated hummingbirds and flycatchers near the top of a tree. A Ferruginous Pygmy Owl. These owls are diurnal hunters, unlike the Pacific Screech-Owl and Striped Owl from earlier in the morning. This one even started vocalizing. I found a total of four Ferruginous Pygmy Owls during my walk!
Kingfisher diversity in the Americas is surprisingly low when compared to Asia and Africa. We have but six species spread throughout the two continents. The American Pygmy Kingfisher is the smallest, and also a species which I have only seen on a few occasions. This one teed up right beside me next to a flooded ditch, allowing some quick photos.

Most of the species that I found were fairly widespread, such as this Green Heron, or migrants, such as the Philadelphia Vireo which is pictured next.
It was a really enjoyable walk with a nice variety of sightings. Scissor-tailed and Sulphur-bellied Flycatchers, Morelet's Seedeaters, Wood Storks and quite a few Black-headed Trogons represented other highlights from the walk.
I left by 8:30 AM. Already at this hour, the sun was scorching the landscape and wildlife activity was diminishing. I headed back to the apartment to meet up with the others, having maximized the early morning hours. We enjoyed a relaxed breakfast before hitting the road and driving towards the Quepos area.
Posted by Josh Vandermeulen at 15:08