Nearing the End of Our Costa Rica Trip - Savegre Valley

Our trip was quickly coming to a close with just a few days left. Perhaps I would have been a bit more sentimental during these final days if I had realized that these would be the last experiences I would have in the tropics for well over a year (thanks, Covid!). At the time, I remained foolishly optimistic that we would only be in Canada for a couple of months before returning again to the Neotropics.

We left the Quepos area behind and headed southeast, following the coastline for a while. It was another perfectly sunny day in paradise. We made one final stop along the Pacific to take in the view, but then it was time to climb into the mountains and head towards cooler climes. 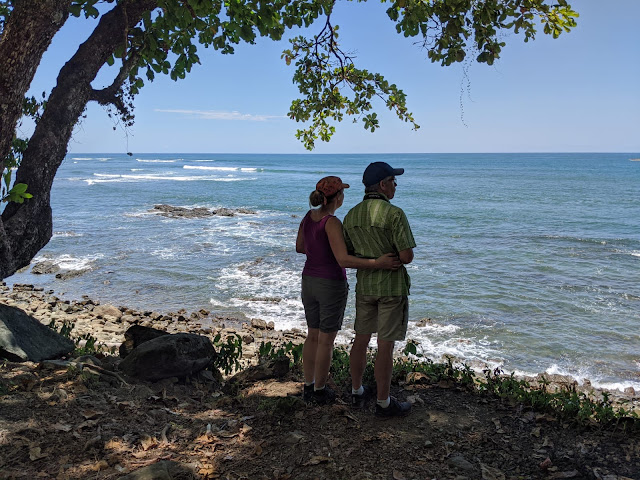 The car's thermometer steadily dropped as we navigated higher into the mountains. The periwinkle sky was replaced with swirling clouds and bands of fog, and soon we had arrived at our destination - a restaurant called La Georgina that is located just outside Parque Nacional Los Quetzales. We were now situated over 3000 m in elevation. Here, there was very little (if any) overlap with the bird species we had been watching just a few hours earlier along the Pacific coast. At the hummingbird feeders we watched the antics of Talamanca, Volcano and Fiery-throated Hummingbirds. A loose flock of Mountain and Sooty Thrushes passed through, while Band-tailed Pigeons and Swallow-tailed Kites winged by overhead. Large-footed Finch, Slaty Flowerpiercer, Black-and-yellow Silky Flycatcher and Hairy Woodpecker rounded out some of the other bird species.

Lunch here was cafeteria style and nothing special, but the price was right and included access to the well stocked hummingbird feeders. Feeling sated, we continued onward to even higher elevations.

Laura and I had visited the Cerro Buenavista communication towers earlier in our trip. A gravel road meanders up the hillside towards these towers, providing access to the stunted forest found at this elevation. Some refer to this habitat as páramo, but it looks very different from the Espletia and Puya-bromeliad dominated páramo that we have explored in the Andes of South America. At over 3400 m in elevation, these radio towers are about as high in elevation that one can easily visit in Costa Rica.

The sun had reappeared, helping to warm the landscape by counteracting the cool breeze. This was a neat environment for us to explore. And doubly so, considering that we had been in the steamy Pacific lowlands just a few hours earlier. We enjoyed watching Volcano Juncos foraging on the ground, and I even lucked out with a heard-only Peg-billed Finch. It would not respond to my playback, though. This was not surprising, given the time of day and the fact that these birds are lusted after by birders during most days of the year. This road to the radio towers is one of the most accessible locations to search for this scarce, range-restricted species.

We left the high elevation shrubland behind and finished driving to our accommodations for two nights, a rustic mountain cabin located in the upper reaches of the Savegre Valley. The air was cool as afternoon turned to evening and we made good use of the space heaters and extra blankets that night. Despite the temperatures, I optimistically set up my moth sheet. The strong breeze did not help matters and I eventually gave up after an hour with absolutely no moth sightings. My owling attempts were equally unsuccessful. Bare-shanked Screech-Owl was one of my remaining targets birds from the Talamanca mountains and they are often reported from this area. Again, the strong winds did not help my cause and I eventually admitted defeat. A vocalizing Dusky Nightjar was the only night-bird of any consequence.

I awoke by dawn and eagerly awaited the sun cresting over the mountains, along with the inevitable bird chorus. The birding was far better than the previous evening and I soon tallied Resplendent Quetzal (heard only), Barred Parakeet, Dark Pewee, Acorn Woodpecker, White-throated Mountain-Gem and a mixed flock of songbirds that contained Wilson's, Tennessee and Black-throated Green Warblers, Collared Redstart, Yellow-winged Vireo, Flame-coloured Tanager and more. Not a bad start to the day before the morning's coffee.

Even better, a small group of Spotted Wood-Quails appeared at the edge of the property! Laura and I had briefly seen a pair dart off the road a few weeks earlier, and we had also heard this species once, but this encounter was far more satisfying. Luckily, all four of us managed excellent views of this attractive species before they disappeared down the hillside and into deep cover.

Too many of the wood-quails on my life list are heard only, and I have only photographed a handful of the other species. Any time that I can obtain photos of an elusive wood-quail species is a good day in my books.

Our plan for the day was to drive down to the bottom of the valley and visit the Savegre Hotel and Spa. While the rooms here were a bit too expensive for our budget, the hotel owns an extensive swath of forest, complete with hiking trails that go on for miles. For a small fee, one can access these trails for the day.

My target list of Talamancan bird specialties was dwindling, but there were still a few that I could seek out here; Silvery-throated Jay, Streak-breasted Treehunter, Elegant Euphonia and Sulphur-winged Parakeet among them. Before we could reach the Savegre Hotel, I slammed on the brakes as a Northern Emerald-Toucanet appeared on the road.

Toucanets may look beautiful, but they too will eat a tasty dead bird without thinking twice about it. This one was attempting to consume a baby thrush of some kind.

For some reason everyone else got a kick out of me lying down on the road to photograph the bird. Those delicious low angles are worth it, I'm telling ya...

Our next stop was only a few minutes further down the mountain. This time, it was a conspicuous Golden-bellied Flycatcher that drew my attention.

Eventually we reached the Savegre Hotel and found an employee in the lobby to settle up the trail fee ($10 USD per person). Not a bad deal for Costa Rica, where everything is about twice as expensive as it should be.

Our Toyota Rav4 had no issues climbing the rough gravel road to where some of the trailheads originate. The air temperature had warmed slightly and it was a very pleasant morning with minimal wind and numerous birds. The mature oak forest here was just gorgeous.

The Savegre Valley is an excellent location to observe several thrush species. This Ruddy-capped Nightingale-Thrush was the very first one we had seen (all previous encounters were heard-only).

The Collared Redstart is said to be a friendly little bird with little fear of humans. We had found this species on a few occasions with mixed flocks, but those views had been frustratingly fleeting. Our luck would turn scarcely ten minutes after we had started hiking.

The birding remained active even as we approached the noon hour. Laura spotted a female Resplendent Quetzal (though it did not stick around for very long), I got on to my first Elegant Euphonia, we finally experienced excellent views of a Wrenthrush, and we noted many mixed flocks of birds.

As we rounded a bend, my mom exclaimed that she had found an impressive moth. What a beaut, indeed!

This behe-moth is known as the Godman's Silkmoth (Antheraea godmani). It is one of four species from this genus found in the Americas (including the familiar Polyphemus Moth), but the Godman's Silkmoth is the largest and rarest of them. It finds habitat in pristine montane forest in Central America, especially in areas with an abundance of oak as this is the food plant for the caterpillars. This species reaches a wingspan of nearly 20 centimetres.

This one must have recently emerged, as its wings were very fresh.

We finished our hike and drove back down to the hotel at the urging of our rumbling bellies. Following this well-needed diversion, it was back to the birds! The gardens around the hotel included many flowering and fruiting species, and birds were common. I heard some squawking sounds that piqued my interest and followed the noises to an apple tree. My hunches were confirmed when I noticed several Sulphur-winged Parakeets tucking into the ripe apples. Awesome!

I called the others over to observe this special species. Sulphur-winged Parakeet is another Talamancan specialty, being found only in the mountains of Costa Rica and western Panama. They are not particularly rare, but for some reason we had not encountered any up to this point. Most of my parakeet sightings seem to consist of backlit, screeching silhouettes wheeling over the trees. This intimate experience was a welcome change.

That evening I tried once again for owls from our accommodations in Dantica. I even walked up the road for a while and played the tape periodically. Unfortunately, the screech-owls remained silent once again. That is birding for you.

Posted by Josh Vandermeulen at 14:47