On a cold, wintry evening, Laura and I arrived at Pearson International Airport in Toronto to embark on our honeymoon. As I mentioned in the Introduction, Laura had no idea where in the world we would be heading since I planned the entire trip as a complete surprise. Looking at the departure board, we scanned the list of destinations - Winnipeg, Edmonton, Montreal, Chicago - and one location stood out to Laura. Georgetown. Assuming I would not be so cruel as to plan our honeymoon to a blustery, snowy city in the dead of winter, she figured that we were off to Georgetown. Eventually I informed her which country Georgetown was located in, and then promptly began filling her in with details about the trip. We were more than a little excited!

Our overnight flight was uneventful and we both were able to grab a few hours of fitful sleep before our arrival at 4:30 AM in Port-of-Spain, Trinidad. We stayed on the plane for our brief layer and as dawn appeared on the horizon, we were off again. This time we were cruising over the lush tropical forests of western Guyana.


We landed at the main international airport in Georgetown, with some Gray-breasted Martins representing our first birds of the trip. Stepping out of the plane a wave of heat and humidity overtook us; our Canadian bodies would need some time to acclimate. Within a few minutes of being in the new environment I started to feel more comfortable, and any slight worries that had been in the back of my mind in the days leading up to the trip quickly began to vanish. We were officially in Guyana and would be at our first lodge later that day!

Customs and baggage collection was a speedy affair in the tiny airport, and we grabbed a taxi to take us across town to the domestic airport. We had tickets booked on a small 20 seater plane which would take us south to the border town of Lethem, located across a river from Brazil. From here we would be meeting our driver, Thomas, who would take us deep into the heart of the Rupununi savannah to our first lodge,  Karanambu (number 2 on the map, below). 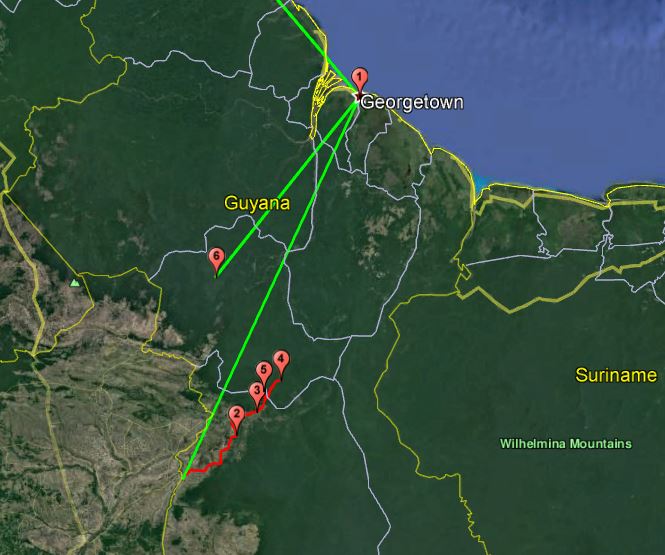 We were rather early for our flight and were not able to get on the earlier flight, so while we waited we did some exploring (Laura saw her first Wattled Jacanas and Crested Caracaras). Eventually we loaded onto the little plane and were off.

It was late afternoon by the time we arrived in windy, dusty Lethem. We quickly found Thomas, our driver, and threw our packs into his little sedan. Bumping along a gravel road, Thomas soon turned off onto a dirt track that ran through the savannah, with only three hours of driving seperating us from the lodge. The landscape was beautiful as the sun lowered in the sky. Termite mounds dotted the horizon, while endless grassland and occasional wooded stream valleys passed by, outside our windows. As I had traveled in South America previously, most of the common species were familiar, but I eventually added my first lifers of the trip: Burnished-buff Tanager by the Lethem airport, and a flock of Red-shouldered Macaws flying past in the open savannah. Giant Anteaters unfortunately remained out of site through the duration of the drive.

Several hours later we finally arrived at Karanambu, though Thomas had to stop at a few homesteads along the way to obtain directions. Somehow he managed to avoid any flat tires or other car issues; quite the feat considering the state of the "road"! We said our goodbyes to Thomas and checked in to the lodge. It felt great to be here following a long twenty-four hours of travel. That evening before heading to bed we found a few "friends" including a scorpion in the shower and a Red-snouted Treefrog in the toilet that promptly lept out of the bowl when I turned to flush. It was great to be back in the Neotropics, even if it meant one had to be a little bit more vigilant about where they stepped, and take care to investigate the toilet for any frogs before using it!

Too excited to sleep, I was up before dawn to listen to the savannah come alive with birdsong. It is always a challenge during the first few days in a new area. While some of the birds were vaguely familiar from previous trips to Neotropics, many were not. Slowly though, I committed the new songs to memory and began to feel a little more comfortable. Among the dawn chorus on our first day, Undulated Tinamou and Variable (Little) Chachalaca were new and exciting.

The previous evening at dinner we met our guide Manny who would be accompanying us during our two days at Karanambu, as well as Patty; a well-traveled Brit around our age, who was working and living at the lodge at the moment. We formulated a plan which involved an early morning drive on one of the pickup trucks through the savannah, to look for a Giant Anteater. The other two guests staying at the lodge - a Brit named Catharine and a Finn named Juha, both solo travelers - joined us for the savannah drive. Later in the day we would also head out to the nearby river to search for caimans, birds, giant river otters and whatever else we could find.


The early morning drive was fantastic and we stopped frequently whenever one of us spotted something interesting. It felt awesome to be cruising through the savannah at dawn, with the warm air blowing through our hair. The oppressive temperatures and humidity would surely be arriving later in the day, but these first few hours were just magical.


At one point, a small black and white tyrannid drew my attention as we passed near a small creek and so I banged on the roof of the cab to stop the truck. I was thrilled when, after vacating the truck and walking out into the savannah, the bird re-appeared, showing itself as a White-naped Xenopsaris. This species is one of several that has a disjunct population, with most individuals found in the southern Amazon and the Pampas of Argentina and Paraguay, but a much smaller population located in the Rupununi savannah and other open habitats in northern Venezuela.


A few guys had gone ahead of our truck on dirtbikes, scouring the savannah in hopes of spotting a Giant Anteater. We had been driving for well over an hour, stopping periodically, when the call came over the radio that an anteater had been spotted. Off we went!


The Giant Anteater was a fascinating animal to see in person as it slowly ambled through the savannah. With a long thin snout used for sucking up termites, and a long bushy tail, we both remarked that it had the appearance of a household cleaning appliance - vacuum on the front, feather duster on the back.


Considered Vulnerable according to the IUCN Red List, Giant Anteaters have been extirpated across much of their former range, especially in Central America and southern South America. The reasons behind this are multifaceted, as is usually the case. Habitat loss, dietary specificity, low reproductive rates and deaths caused by fires and roadkills all likely play a significant role. Fortunately the population in the Rupununi seems relatively large and stable, for now.


It was a treat to be face to face with such an iconic species, and we soaked in every minute. It was not even 7:00 AM on our first day, and we had already bagged one of the highlight species for the trip!


Continuing on, a curious Crab-eating Fox watched us from a short distance away as we cruised past in the pickup, necessitating a stop. Crab-eating Foxes are relatively common in South America but this was my first awesome look at one. Laura was thrilled with the encounter as well!

Shortly afterwards some problems with the truck occurred, and it appeared that we would be walking the rest of the way. I felt sorry for the guys having to deal with the truck. We found out later that it was quite an expensive affair to get it fixed.


We were only a few kilometers from the lodge and slowly made our way back. Despite the early hour, the sun was up and quickly roasting the savannah. While walking back I paused to watch a White-tailed Goldenthroat, while later we found a little group of Red-capped Cardinals.

By 7:45 AM we were back at the lodge, having thoroughly enjoyed the morning. Before breakfast, we tried out the hammocks and made a friend with one of the local cats.

In the next installment, I'll detail the rest of our first day at Karanambu.