Before dawn we enjoyed coffee and tea in the main lodge while listening to the Guianan Red Howler Monkeys off in the distance. Following that, Delon took Laura and I by dirtbike to a patch of white-sand forest that John, one of the other guides at the lodge, and Delon had discovered several kilometers up the road. While "typical" rainforests in the area grow on soil that contains a high clay content, several bands of forest growing on quartz-rich, sandy substrates can also be found in the region. These forests growing in the nutrient-poor environments tend to be stunted when compared to nearby terra firme forests, but they also contain unique assemblages of species, many that are restricted to that environment. This patch that Delon took us to provided habitat for several unique birds, including Guianan Red-Cotinga, Black Manakin and Bronzy Jacamar, and we hoped to connect with those three this morning.

The dirtbike ride was quite enjoyable and the heavy cloud cover combined with a brief shower overnight had cooled the air. Delon dropped me off then returned for Laura. In the few minutes that I was alone I quickly picked up on the vocalizations of some Cayenne Jays and they soon appeared at the roadside. While this Guianan Shield endemic is not necessarily a white-sand specialist, Cayenne Jay does occur regularly in that habitat type.

Laura and Delon soon came rumbling down the road, with a backdrop of untold layers of forest providing quite the setting.


We slowly picked our way through the white-sand forest, our ears attuned to the various birds and insects all around us. Bronzy Jacamar was the first target to fall when we heard one vocalize quite close to the road; unfortunately, it remained out of sight. Guianan Red-Cotinga was next, though it took some time to really have a good look at this range-restricted cotinga, an iconic species for the region. The light levels were low in the understorey so I had to really push the ISO on these photos. We watched up to six individuals in the hour we were in the forest, an experience I will not likely forget soon.

Black Manakins also appeared, including several males displaying for unseen females. The more widespread Golden-headed Manakins were a little bit easier to stay on as they were less furtive than the Black Manakins.

We lucked out by running into a little group of Gray-winged Trumpeters patrolling the forest floor for fruits or insects. Gray-winged Trumpeter is an interesting, chicken-like species found in northern Amazonia that is one of few species of birds that practice cooperative polyandry. Female birds will have multiple male partners, and each male will cooperatively assist with raising the young.

Soon it was time to leave, but one last  new bird flew overhead - a Black Caracara.

While finishing up breakfast, Delon called me over - he had his scope set up, pointing at "the cotinga tree". This time he had a Tiny Hawk teed up! While widespread in Central and South America, Tiny Hawk is one of the least well known members of its genus (Accipiter) and is uncommonly encountered. Many aspects of its biology remain unknown. I watched the hawk for around five minutes as it perched in the tree, until it took flight and silently slipped into the forest. Tiny Hawks are adapted to hunting birds and have been known to prey specifically on hummingbirds.

Following breakfast we took care of a few housekeeping items (putting the laundry in the sun, purchasing an hour of internet) then headed out with Delon and Kendrick for a late morning search for an Amazonian Pygmy-Owl that was reliably found in a certain location.

Along the way we paused frequently - to scan nice looking locations for Fer-de-Lances, investigate every little rustle in the undergrowth, and pick up on whatever bird species were nearby. Soon the path began to climb around the side of a large hill and twenty minutes later we were in position.

A little bit of playback was all that was needed to instigate a response from the owl, but that was only half the battle. He did not want to come in any closer so Delon and Kendrick set off on foot, while Laura and I stayed back to occasionally play the tape. Delon and Kendrick returned empty-handed but the owl began calling again. It was right above our heads! We struggled in vain to find the little fluff ball nestled somewhere above us but finally Delon found him!

We savored the views of the owl and watched him sing for a while, fully enjoying the moment. While it may seem like "cheating" to have a guide bring you to a stakeout spot and calling in the bird, I have to say in the moment it was pretty awesome.

Tiny Tyrant-Manakins frequently vocalized, even during the middle of the day. After some searching we were finally able to spot one low enough to train the scope on it. Yet another range-restricted species that we connected with!

We returned to the lodge as it was approaching lunch time, then relaxed for a few hours during the middle part of the day. I set up my scope for the mid-afternoon cotinga watch in the clearing around the lodge and soon Delon and John joined me as well. While the cotina tree remained barren for the hour that we searched we did pick up a few new species in a mixed flock that passed through - Guianan Tyrannulet, Pygmy Antwren and Yellow-crowned Elaenia. Once again I was relieved with my decision to bring my scope to Guyana, as none of those birds would have been identifiable without it. The canopy is just so impressively tall.

Around 4:00 PM we met up with Delon for our afternoon hike. Over the previous days we had expressed our interest in reptiles and amphibians and frequently inquired about the possibility of going out at night - the best of time the day to search for herps in the Neotropics. Delon had never done that before, since nearly everyone who visits Atta Lodge is primarily interested in birds. The creek we had passed the previous evening showed promise, especially since it was currently the dry season. Delon knew of a small trail that had been cut along part of the creek so we planned to investigate after dark. Until sunset we would explore the highway for birds and other wildlife. Kendrick also came along for the adventure, his first time looking for herps at night along the creek.

We set off on a trail, heading towards the highway. Along the way I spotted this Bridled Forest Gecko (Gonatodes humeralis) on a trailside stump.

We also flushed a Spectacled Owl that happened to be roosting quite close to the footpath. Delon managed to spot it sitting quite far back in the forest. Awesome!

Along the highway we enjoyed seeing both pairs of Scarlet Macaws on their nests, a Greater Yellow-headed Vulture, and many of the same birds from the previous afternoon. A nice surprise was finding a pair of Rose-breasted Chats, especially since we had dipped on them earlier in the day.

Several Green Oropendolas were heard calling from the forest canopy and one flew over our heads, carrying a food item of some sort.

We found a pair of Guianan Toucanets along the road as well, providing our first good looks at this diminutive species.

We set up at the bridge twenty minutes before dusk. We hoped that the Crimson Topaz would return to its favorite perch along the creek like it had the previous evening, but we had no luck this time around. Several Proboscis Bats were roosting on an overhanging branch and a couple of Spectacled Caimans lurked in the murky water. A Coroya Wren sang, while two Whie-browed Antbirds skulked in the roadside vegetation.

Once darkness settled in the real fun began. Several crabs were quickly found by the water's edge, including this macabre scene. 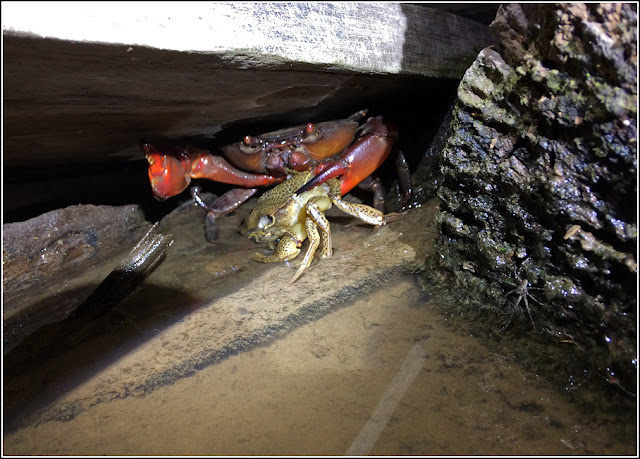 The repetetive, deep croaking of various frogs drew our attention. We tracked down several Rusty Treefrogs (Boana boans), while the eyeshine of several others were illuminated on the other side of the watercourse with our flashlight beams. Any thoughts of crossing the creek were quickly stopped when one noticed all the eyeshine from the Spectacled Caimans.

Laura made the find of the walk after we had been searching for nearly an hour. A baby South American Watersnake, drapped over a piece of concrete that was resting in the water under the bridge!

Her sharp eyes had come in handy once again! We strategized how to catch the snake for a better look and were successful. I don't think Laura's smile could be any bigger in this photo.

Delon and Kendrick were pretty interested in the snake as well and I showed them how to tell it was a female. I even got them to hold the snake!

We herped for a few more minutes but soon ventured back to the lodge. Our stomachs were grumbling plus it was already 7:30 PM, not giving us much time to hike back, eat and make our 9:00 PM bedtime. :)

Our time in Atta was drawing to a close - Thomas would be picking us up in the morning - but we maximized every hour and had a phenomenal time. I would love to return one day...