Jays and Snakes In The Sierra Madre Del Sur

Driving in Mexico is fairly straightforward, but like many countries it has its quirks. I've put together a short list of some of these characteristics from my limited experience on the roads here.

1. Stop signs and red lights are just a suggestion in lightly traveled sections of cities and towns, loosely followed by most motorists but completely ignored by taxis. This is obviously not something that is restricted to Mexico, but a practice utilized in many countries around the world.

2. When at one of the few stoplights where the rules are adhered to, the light will turn green and multiple vehicles will honk simultaneously. If you are the vehicle at the front, do not get offended by this. They are simply letting you know that the light has changed, since the vehicles at the front often do not have a clear visual of the light. This is something that we have noticed throughout Latin America.

3. Using your indicators is optional as well. One exception to this - motorists will often use their left hand indicator on the highway, not because they hope to turn left, but because they are letting you know that it is reasonably safe for you to pass them.

4. When driving on the single lane highways, common courtesy is to drive halfway on the shoulder to allow faster vehicles going the same direction as you to pass. This also allows passing vehicles coming from the other direction to squeeze by you. I actually prefer this, since it makes the flow of traffic that much easier. In Canada, one must take care when overtaking other vehicles. If you finish passing while an incoming vehicle is only a hundred meters away, that driver will lay on the horn and likely say some choice words to themselves and the occupants in their vehicles. In Mexico, even if there is a transport truck coming straight at you, feel free to pass anyways. The transport truck will simply move over enough onto the shoulder so that you can squeeze through the (admittedly, small) gap.

6. Speed bumps! We arrived in Mexico from Panama, where speed bumps are found in typical quantities. To prevent speeding in Panama they simply place a police officer doing radar every kilometre along the highway. In Mexico we have yet to see a speed trap. Why is that even necessary, when most roads have speed bumps every 20 m? Seriously, we have had days where we have navigated several hundred speed bumps, or reductors as they are called here. Many of these reductors sneak up on you, being unpainted and located perfectly where a shadow crosses the road. It does not take much for an unsuspecting birdwatcher to nail one when they have one eye trained on a unidentified yellow-bellied kingbird on a fence, while driving at 60 km/h (not speaking from personal experience there...). Reductors? More like destructors...

At any rate, we headed south from Oaxaca during the afternoon on November 17, navigating the countless speed bumps along the way. 350 reductors later, we had climbed high into the mountains near the town of San Jose de Pacifico, or San Mateo Río Hondo as it is called on Google Maps.

This area is home to one particular rare species of jay, one that I thought would take a miracle to find. The White-throated Jay is an alpine species with a tiny global range. Most eBird records are from the area near San Jose del Pacifico, though the number of reports is much smaller than the total count of birders who stop here. This jay really is quite rare and difficult to find. Its behaviour is reminiscent of a wren, sneaking around vegetation unobtrusively.  Well, the birding gods were smiling down on us. I pulled over along the highway about 1.5 kilometres north of our destination for a snack break, and I played the call of the White-throated Jay just for fun. Laura stopped me halfway through – “I think I heard the jay!”. We listened, and sure enough, a White-throated Jay was calling back!

It was a tense few minutes but we soon spotted the gorgeous bird up the hillside and it even came down to check us out. I managed some so-so photos and a few audio recordings whenever there was a gap in the truck traffic motoring up the mountain road. We were positively thrilled, fully expecting to “dip” on this rare species.

I know some birders who have unsuccessfully searched for this species on countless trips to this part of Mexico. We really were insanely lucky. This one sighting makes up for all the other montane jays that we seem to have terrible luck with.

We headed over to a popular restaurant/cabańas called Puesta del Sol. This happens to be one of the better areas for the jay, but we rolled up without having to worry about that. Instead, we purchased hot chocolates from the restaurant and watch the warblers, hummingbirds and a Hooded Oriole in the nearby trees. Bumblebee Hummingbirds are usually found here with ease, but we could not turn one up for some reason.

The best birding was along a shrubby/weedy hillside (pictured), located between the highway and a walkway near the restaurant. We birded this area from the coordinates of 16.173190, -96.506018.

My other potential lifer in this region was the Hooded Yellowthroat. This is a species that pretty much looks like a Common Yellowthroat, but it has a much different song, prefers scrubby hillsides, and is a non-migratory endemic species to central and southern Mexico. We found one calling along this hillside but it would not pop up and show its face. Presumably, this species is "taped out" by birders.

We noted most of the 30 species on our eBird checklist from this one particular hillside. Highlights included Rufous Hummingbird, Lincoln's Sparrow, Spotted and White-throated Towhees, Cinnamon-bellied Flowerpiercer and multiple Bullock's Orioles.

The staff at Puesta del Sol were quite accommodating. One gentleman, seeing we were birders, gave us directions to a trail that begins close to the restaurant. We went down it a short ways and enjoyed some Mountain Trogons. Presumably, this trail would be a good birding location, one of the few in the area that is off the main highway.

Laura and I spent the night at a great little spot that we found on AirBnB in San Jose del Pacifico. We had booked a room in this town so that we could have a full afternoon and morning to search for the White-throated Jay before moving on. Well, that wasn't really necessary any more. I considered going back to Puesta del Sol for another crack at the Hooded Yellowthroat in the morning, but in the end we decided to leave town at dawn and drive further down the mountainside to bird a different region while the day was still young. 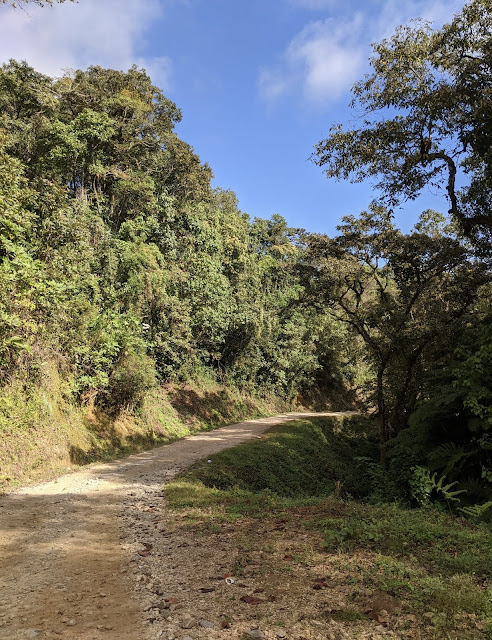 We chose a dirt road at around 1500 m in elevation that leads to a few small villages. The turnoff is at 15.9831879,-96.5245914 and on eBird it is called Sierra de Miahuatlán - La Soledad. This is a great spot to look for the extremely range-restricted Blue-capped Hummingbird, as well as the Red-headed Tanager and the local subspecies of Northern Emerald-Toucanet (Wagler's Toucanet). We parked at 15.980823, -96.525003 and walked up the road for 1.5 kilometres or so before turning back. 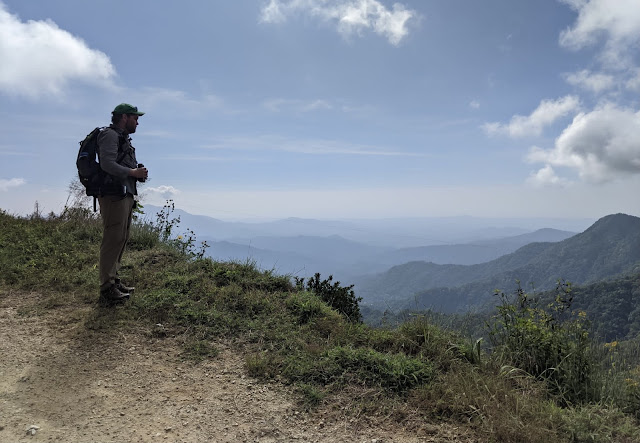 The birding here was quite good and we found all of our main targets listed above. The Blue-capped Hummingbird was the dominant species of hummigbird along the road, excluding the wintering Ruby-throated, of course. We enjoyed great looks at several females feeding on red tubular Salvia flowers along the roadsides. Later, a sharp male perched above us for just a few seconds before departing.

Wagler's Toucanets were also quite frequent. We found several groups of them, including a half dozen feeding on a fruiting tree alongside Rose-throated Becards, White-throated Thrushes, Brown-backed Solitaires, Black-headed Saltators and Audubon's Orioles. The latter was also a new species for both of us.

Birding was slow at times - it was now mid-morning - but we slowly chipped away. Greenish Elaenia was a species that I had never photographed before and so I made that a priority here, a location where they are reasonably common.

We passed a few houses located at a high point along the road. The sun was really beating down here but the butterflies were just getting started.

We turned around and began heading back to our vehicle. But a small mixed flock was reason to pause. I thought I heard the chips of a Red-headed Tanager and so played a bit of tape. Sure enough, a young male flew in to check out the intruder. Score!

The mixed flock continued to grow, and best of all, we were able to observe a female and adult male Red-headed Tanager as well. Our morning walk had been pretty successful with all main targets acquired. I had been holding out hope for a Mexican Hermit as well, but you can't get them all!

We drove a little further to a restaurant called El Mirador that happened to show a cluster of records of the Cinnamon-sided subspecies of Green-fronted Hummingbird on eBird. It was lunchtime when we arrived. Unfortunately, our stakeout of this spot was unsuccessful with the hummingbird but we found a small flock of warblers that included a locally rare Cape May Warbler. With several hours still to kill before we could check into our hotel in Pluma Hidalgo, we chose to return to the same road from that morning, at La Soledad.

This was a prescient decision since we found the day's main highlight. There, crossing the road in front of us, was a huge ratsnake of some sort, its scales glistening as it made its way across the road. No bird gets our blood pumping quite like how a snake does for us!

The beautiful animal in front of us was not a ratsnake, but a Middle American Gopher Snake, a species closely related to the ratsnakes. It was around 5 feet in length - a hefty individual - and seemed to be in very good condition.

I very gently picked it up and the snake did not seem to mind at all. Maybe I am anthropomorphizing, but it seemed to even enjoy the warmth from my hands.

The Middle American Gopher Snake ranges from southern Mexico to southern Guatemala. It is an absolutely gorgeous snake, with the lines on the neck eventually transforming to blotches further down the length of its body.

After admiring it, we let it go beside the road and watched it crawl up the embankment. Eventually, it found a crevice to its liking and slowly disappeared into the hillside. We wished it well, warned it of the dangers of roads, and continued on our way.

Posted by Josh Vandermeulen at 22:01

Laura's face (and bulging pockets!) while handling the Pituophis is priceless! Dang, that's an interesting snake. I definitely would have thought Elaphe-Pantherophis-Bogertophis over Pituophis (the snake has a build more of the former groupings than the latter, at least based on Pituophis spp. found further north).

I'm attending to a backlog of blog reading. Thanks for sharing these terrific adventures, J&L! Continued safe and productive travels,