When searching for car rental deals online we were dismayed to see the expensive prices in Mexico at the moment. A shortage of rental cars is the problem. Presumably, due to Mexico's lax COVID-19 restrictions, many tourists from the United States and Canada are currently visiting the country which is contributing to the shortage.

Somehow - it may have been a glitch on National's website or something - Laura found a deal for a premium car that was less than half the price of the economy cars, but only for the exact dates that we wished to book. We quickly snagged the deal and upon picking it up in Mexico City were pleased to see that we had been upgraded to an SUV with reasonable clearance, for no additional fee. Score! 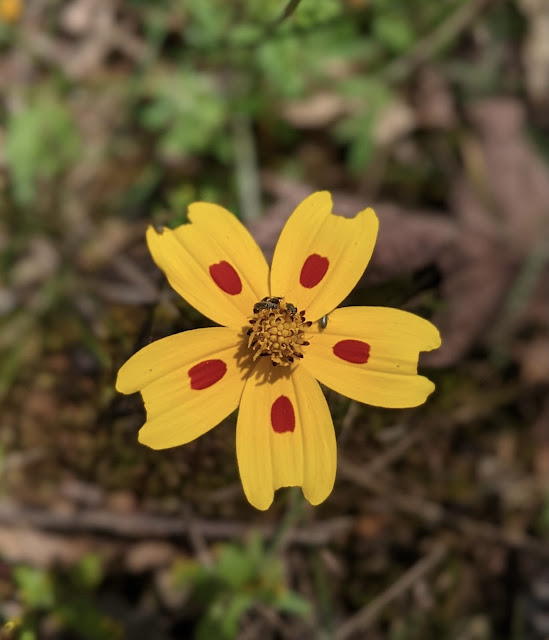 We slowly navigated our way southwards through Mexico City. It truly is massive (nearly 22 million people live in Greater Mexico City!) and we only saw one corner of it. You could probably guess that we are not really city people and so we were happy to leave it behind.

Laura and I have the rental vehicle for just over 3 weeks. We have planned an ambitious itinerary that takes us south into the states of Morelos, Puebla and Oaxaca, eastwards into Chiapas, and north into Veracruz. We will drop off our rental car at the Veracruz airport and will take a domestic flight to Cancun, where the Yucatan Peninsula will be next on the agenda.

But let's not get ahead of ourselves. For our first two days we have explored some sites in Morelos, getting our feet wet with the birds of the pine-oak forests of this region. Many of these birds we will see in Oaxaca, though with a few exceptions.

After dropping off our bags at our hotel in Tepoztlán, we explored a gravel road that connects the towns of San Juan Tlacotenco and Coajomulco, passing through beautiful pine-oak forest. This was an excellent plan since the birding was decent and we only crossed paths with three vehicles during an entire afternoon of exploring.

My main bird target along this road was the Transvolcanic Jay. Mexico is famous for many things, and the diversity of range-restricted jays is one of them (amongst a very small subset of people). I have terrible luck with rare highland jays, and while the Transvolcanic Jay isn't supposed to be that rare, it is a highland jay which guaranteed that we would not see them. And we didn't.

But that did not stop us from having an enjoyable four hours of wandering along the road. We encountered several mixed flocks containing a nice diversity of species. Warblers were well-represented and Laura picked up a number of lifers including Black-throated Gray, Hermit and Red-faced Warblers. The latter was a new species for me as well; it disappeared rather quickly though, but not before we had diagnostic looks. I hope we see another one this trip because this species is quite the stunner.

A reasonable selection of flycatchers were found, including this Hammond's Flycatcher that allowed a close study.

Hummingbirds were quite common along the road but nearly every single one was a White-eared Hummingbird. We were also buzzed by two Bumblebee Hummingbirds and found singles of Blue-throated Mountain-gem and Berylline Hummingbird.

The first mixed flock contained our "lifer" Golden Vireo, one that I was not expecting for this location. We should see more in the upcoming weeks, though.

Other new birds for me included White-striped Woodcreeper, Blue Mockingbird and Gray-barred Wren. The wrens were a lot of fun to watch, and we encountered two separate groups of them. They were quite curious, being one of the only species that actually responded to our pishing. They ended up winning the coveted "Bird Of The Day" award from both of us.

As the sun sank lower in the sky, we ran into one final mixed flock containing a multitude of species. Numerous Brown-backed Solitaires belted out their tumbling songs, and we couldn't resist taking photos of the picturesque valley below.

We were up before the sun and made the short drive around to San Andrés de la Cal. The air was crisp but birdsong was evident as we prepared our "trunk sandwiches" and readied our gear.

The scrub forest just east of San Andrés de la Cal seemed like an excellent destination. Few eBird checklists had been submitted from here, but several intriguing species were possible. I was most interested in Black-chested Sparrow and Rusty-crowned Ground-Sparrow. Both of these New World Sparrows are quite attractive, endemic to western Mexico, and this would be our only chance at them during this trip.

We parked at the edge of town and walked east along a dirt road towards the protected scrub forest. The lifers came hot and heavy - Golden-cheeked Woodpecker, Rufous-backed Robin, Varied Bunting, Banded Wren, Violet-crowned Hummingbird. Several Streak-backed Orioles posed for the camera, while we noted a flock of attractive Stripe-headed Sparrows.

The path forked just east of town, and we followed the left fork until it petered out near a cow pasture, perhaps after 500 m or so. We then retraced our steps to the intersection and took the remaining fork for around 1 km or thereabouts, before returning to our car. Because the birding was so good, it took us all morning to traverse this short stretch.
Hummingbirds were quite numerous and we identified seven species. The "best" of these was probably a Beautiful Hummingbird. This species is found in only a small portion of southwestern Mexico, and was shaping up to be one of the trickier species we were hoping to see. It looks very similar to the Lucifer Hummingbird, a species found further north that reaches into the southwestern United States. There is supposed to be no range overlap between these two species, yet both have been eBirded from this site. The females are virtually impossible to separate but the males can be told apart.
Some of the other hummingbirds were a little more photogenic. Below are three that were new species for both Laura and I.

The day had quickly warmed; it sure does not take long in these desert landscapes. Several butterflies took to the wing.
It took some effort but we finally found our two target species. The Black-chested Sparrows were in a big, noisy group moving through the low vegetation. Laura spotted the Rusty-crowned Brushfinches; they proved too skulky to photograph, but we each managed good views through the binoculars.
The chip notes of Rufous-capped Warblers and the buzzes of Blue-gray Gnatcatchers precluded a massive mixed flock that contained nearly 30 species. Fortunately, this flock was moving in the same direction as us, allowing us to stay with it for a while to pick out most of the constituents. I finally managed some half-reasonable photos of a Golden-cheeked Woodpecker, we spotted our first Rose-throated Becard of the trip, and we enjoyed sorting through the variety of orioles, warblers, and more.
A muddy puddle in the middle of the path was attractive to a nice variety of butterflies and other insects. We were ready for lunch and the air conditioning in the SUV, but a quick stop to photograph some of the species was in order.

And with that we hit the road, heading east and then south towards the city of Oaxaca. We planned to break up the drive in Tehuacán, where the beautiful desert landscapes will be the subject of my next post.
Posted by Josh Vandermeulen at 21:40