The Oaxaca Valley is surrounded by the Sierra Madre mountains in southern Mexico. As is typical of montane valleys, the climate is quite dry since orographic precipitation occurs on the outside edges of the mountains. Desert and shrubby landscapes are common throughout the lower slopes of the valley, while oak and pine forest proliferates higher up.

The Oaxaca Valley is a popular location for tourists due to its relative proximity to Mexico City (a six hour drive, or 45 minute flight), its abundance of cultural history including numerous Zapotec archaeological sites, and its famous culinary scene. It also happens to be an attractive destination for birders due to the number of interesting species found within an hour of the city of Oaxaca. Some of these are birds restricted to the dry scrub in a small area of southern Mexico, others are montane species limited to some of the mountains bordering the Oaxaca Valley, while the rest have somewhat small ranges in Mexico and/or northern Central America that happen to be found close to the city of Oaxaca.

I had a lengthy target list for the Oaxaca area. We planned to spend four nights in the city, giving us three full days of exploration plus a morning - sufficient time to search for everything. By the time that we had arrived we had already chipped away substantially at the list, though there were numerous species remaining to keep us occupied.

For our first full day we decided to try one of the main roads that crosses the mountains east of the city.  Each of these are worth exploring since they traverse a wide range of altitudes and resulting landscapes, but we began our Oaxaca adventure at the dirt road that climbs up from Teotitlan del Valle. The drive through the city was relatively painless since it was a weekend, and by 7:30 AM we had arrived at an artificial lake just outside of Teotitlan de Valle.

The lake and surrounding environs was quite birdy. American Coots and Least Grebes dotted the surface, Least Sandpipers, Killdeers and two Wilson's Snipes worked the shorelines, Violet-green Swallow swirled above, while a variety of songbirds foraged for bugs and vocalized from the shrubby edges. Among these were a variety of warblers, numerous flycatchers, and my first Cinnamon-rumped Seedeater.

Even though the air temperature was still cool we knew that we were up against the clock. These landscapes warm quickly! We drove a little further up the road, finding a safe place to pull off so we could walk along it. This gravelly track does not see a ton of vehicle traffic and we had it mostly to ourselves for the early part of the morning. Though, by mid-morning, numerous cyclists appeared. It was a weekend, after all.

Bird activity was high early on and some of the dry scrub specialties made appearances. A Dwarf Vireo vocalized from across the valley, though it refused to come any closer when I tried playing its song back to it. A little more accommodating were our first Boucard's Wrens.

These guys sure had character! I love me some big, flashy wrens, and the Boucard's Wren fit the bill.

We also enjoyed more Ash-throated Flycatchers, Bridled Sparrows and White-throated Towhees in this area, though we could not find Pileated Flycatchers or Slaty Vireos, two of our other targets.

We drove a little higher up the road, watching the landscape transition to oak forest with the first few pines mixed in. The air was a little cooler, bird-activity was good, and we encountered a large mixed flock. In my experience, mixed flocks are typically on the wrong side of whatever mountain road I am birding. They are almost always uphill, and usually backlit. This flock was no different but the catch was that the road continued up higher with a tight switchback. We were able to climb above the flock, with the sun at our backs this time. The tables have turned!

Highlights in this flock were many, starting with our first ever Painted Redstarts, as well as a much better look at a Red-faced Warbler. This had been a new species for us a few days earlier, though the views had been fleeting.

The standout bird in the mixed flock was a male Gray-collared Becard. This species has a relatively large range from Mexico to Honduras, but it is generally quite uncommon and not to be expected anywhere. It was a new species for both of us of course, and to boot, it sat still at eye-level for a good few minutes!

Our next stop was another few hundred meters higher in elevation. Here, the oak-pine forest was a little taller, presumably because it receives a little bit more precipitation than areas further downslope.

The birding started off slow, but the butterflying was good. This hairstreak caught my attention.

But soon, the chip notes of Red Warblers, Rufous-capped Sparrows and Slate-throated Redstarts signalled the arrival of another large mixed flock.

This one featured a nice diversity of species; standouts included White-striped Woodcreeper, Rufous-capped Brushfinch, Russet Nightingale-Thrush, Yellow-bellied Sapsucker and Mountain Trogon. A Black-headed Siskin flew over, calling - my first, and a relatively scarce species in this area.

On the drive down we stopped at a particular switchback that is reliable for the Oaxaca Sparrow. You may have guessed it from its name, but this is one of those must-see endemic species to the Oaxaca Valley. Luck was on our side!

Laura was on lizard patrol as we slowly drove down the bumpy road. She spotted several fence lizards including this absolutely stunning specimen.
The day was getting quite warm, especially noticeable as we returned to a lower elevation. We made one impromptu stop due to the presence of a mixed flock. It was a good thing we did, since I soon spotted a Pileated Flycatcher. Apparently, they can be tricky to locate in the Oaxaca Valley at this time of year. It had been a very successful morning and a great way to kick off the Oaxaca leg of the trip! 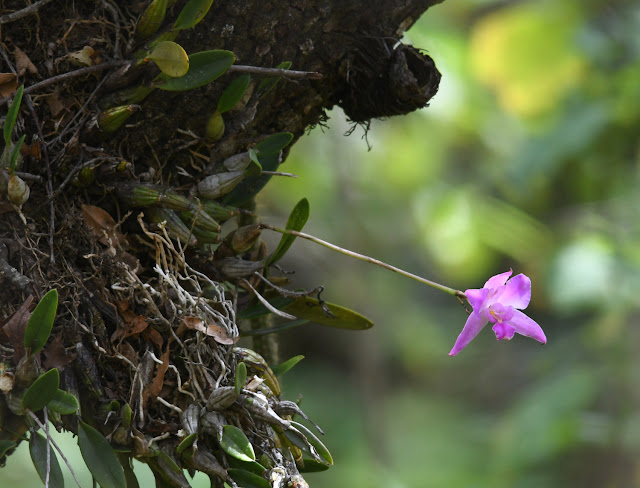 Posted by Josh Vandermeulen at 21:59