My target list for the Oaxaca Valley was dwindling, and we had one full day remaining to explore the area. The only bird that had completely eluded me to this point was the Slaty Vireo, while I had several others - the Dwarf Vireo and Ocellated Thrasher - as heard only. Of course I had struck out on Fulvous Owl as well, but that will have to wait until I visit Honduras or Guatemala.

Laura and I decided to drive southeast of Oaxaca to search for these species along a road leading to some radio towers. Afterwards, we hoped to stop at a nearby archaeological site called Yagul.

The drive out of Oaxaca took a little longer than anticipated (and we did not have the earliest start to the day to begin with). It was already 8 AM by the time that we arrived at the eBird hotspot called Microondas Ocotepec.

Some of the first birds included a small group of Woodhouse's Scrub-Jays along the bumpy entrance road. This required a quick stop; it was a new species for Laura whereas my last sighting was over a decade earlier in California.

We parked the car and explored the roadside scrub for several hours. Birding was slow at times, but then we would encounter a small mixed flock and race to see every species that composed it. But our main targets remained elusive.

The numerous lizards and butterflies kept us occupied during the quieter stretches.

And then Laura spotted it: a Slaty Vireo! I raced over and locked onto this cool looking species for the first time.

This species is notorious for being a skulker, and it took some time before we had fully satisfactory views. But what an awesome vireo it was!

I wish that I could say that our other two target birds fell in quick succession, but that was just not the case. We did not even hear a peep from the Ocellated Thrasher or the Dwarf Vireo. The birding was actually rather slow following the Slaty Vireo excitement. Everything was staying low to the ground and almost nothing was vocalizing. A Lesser Roadrunner ran off the road, barely providing adequate views to identify it, but nothing at all satisfactory. We hoped that the lee side of the mountain would be better since the sun was not beating down on it. Nope! That side was even slower and so I refocused my gaze on butterflies and flowers.

This lobelia was very small, but quite eye-catching. I believe that it is Diastatea tenera.
Our next stop was the Yagul archaeological site, located just off of our intended route on the way back to Oaxaca. In comparison with the Monte Albán ruins in Oaxaca, the Yagul site receives several orders of magnitude fewer visitors, yet it is a spectacular site in its own right. The birding here can be quite good as well. We were sold.
We paid our admission fee (around $4 each) and wandered the site for around two hours. I am no historian, but from what we learned from interpretive signs (and from what Wikipedia tells me), Yagul was a former city state associated with the Zapotec Civilization. The site was likely first occupied from 500-100 BC, though most of the visible remains were built between 1250 and 1521 AD. There is also evidence of human habitation in the general area dating back to at least 3000 BC.
At the time of the Spanish conquest, around 6000 people lived at Yagul; they were forcefully removed from here and relocated to the town of Tlacolula where some of their descendants still live.
Despite it being midday, we enjoyed several bird sightings at the ruins including Boucard's Wrens, White-throated Towhees, Bridled Sparrows, Rock Wrens, Gray-breasted Woodpeckers and a nice selection of flycatchers.
This site is popular amongst visiting birders who are seeking out the range-restricted Beautiful Hummingbird. It was a good thing that we had found one earlier in the trip at San Andrés de la Cal, since we could not drum one up here. The only hummingbirds were a single Dusky Hummingbird and far too many Ruby-throated Hummingbirds, here on their winter grounds.
The most surprising bird here was a vocal Dwarf Vireo that came right in to check us out. I managed a brief view of a vireo-shaped bird flying away through the shrubbery, but we were unable to actually see it. At least we heard it well this time...
Archaeological sites can be great locations to search for lizards. These sun-loving saurians are fond of hanging out on the rock walls.
We followed a path up the side of a rocky hillside, eventually reaching a mirador with an impressive view of Yagul and the valley beyond.
Several interesting orthopterans met us at the top, necessitating some photography. 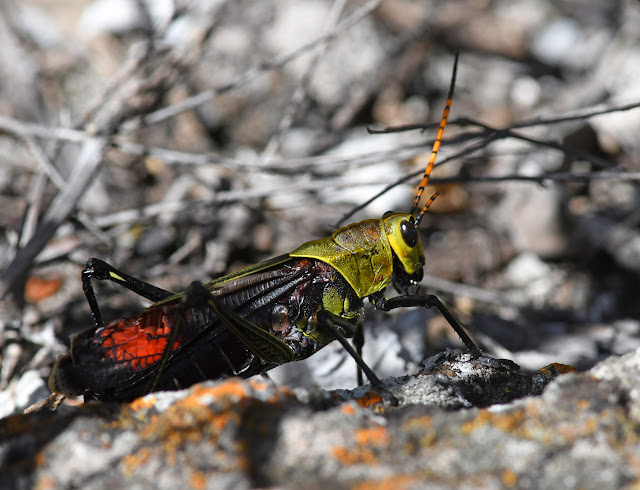 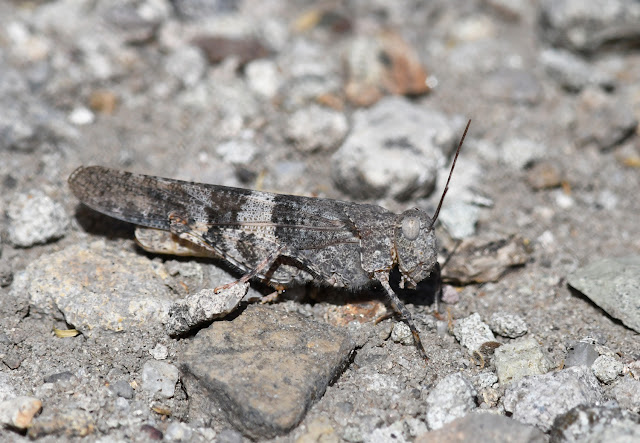 Before leaving Yagul, we briefly explored down a gravel track south of the site that leads to a wetland. Here, we noted our first MacGillvray's Warbler of the trip, while a crisp male Vermilion Flycatcher blinded us with his splendour.
November 17, 2021
Laura and I visited the famous Monte Albán archaeological site for our final morning in the Oaxaca area. Our plan was not to actually visit the ruins. Only a certain number of people are allowed in each day, and so vehicles start lining up at the entrance several hours prior to it opening at 10 AM. This did not seem like a good way to spend our morning! We had just visited the Yagul site, which we basically had all to ourselves, so standing in line for several hours just to be able to see a slightly more famous set of ruins did not appeal to us.
Fortunately, an ecological trail runs parallel to the entrance road at Monte Albán. It provides access through scrub habitat, and is a relatively reliable area to search for the Ocellated Thrasher, Slaty Vireo, and several other key species.
The morning was cool as we walked on the shady side of the ridge. Right away, a Pileated Flycatcher called from somewhere near the start of the trail but it remained out of sight. We slowly birded along the ecological trail, crossing paths with numerous joggers and dog-walkers. It appears that this location is popular with the locals, not just with birders.
Laura has excellent eyes for spotting cryptic birds on their day-roost, and this skillset has helped her locate owls and potoos in the past. She expertly spotted a Lesser Nighthawk resting on a pine bough.
We followed the ecological trail all the way to its southern terminus, though once again, the Ocellated Thrasher eluded us. I had heard one on a previous afternoon visit here, and we tried searching for that individual, but it wasn't willing to give itself up on this day.
Near the end of the trail was an open picnic area that was quite birdy - flocks of warblers and orioles in the trees, doves on the ground, and towhees, flycatchers and thrushes along the scrubby edge.

A Crested Caracara was patrolling the area for something good to eat.
We completed the loop by following the paved road back down to where we had parked. Along the way, we passed around 40 cars, vans and buses lined up, waiting for Monte Albán to open.
Our time in the Oaxaca Valley was over but it was very successful. And I haven't even mentioned the food scene! We left the valley behind and drove south to the Sierra Madre del Sur, home to White-throated Jays, Blue-capped Hummingbirds and more. Seeking out these birds will be the focus of my next post.
Posted by Josh Vandermeulen at 15:11