Sometime during the summer of 2018 Dan Riley and I began kicking around the idea of traveling somewhere during the upcoming winter. It had been a few years since we had done an international trip together, the last time being back in January 2015 when we visited Colombia with several others. Dan and I have very similar interests and travel well together, and we had talked about doing a trip with just the two of us but it had never came to fruition. We both set aside time in January 2019 and began tossing around ideas of where to travel.


It was tough picking the perfect destination that had novel species for both of us, but was not halfway around the world. Dan and I have both traveled a fair bit in Central and South America in recent years but there had not been a lot of overlap in these destinations. Therefore the countries that had the most potential for me were places he had already been to, and vice versa. But there were a few places that would be new for both of us. Peru was one of those destinations, and southern Mexico/Guatemala was another. January would be the rainy season in Peru so we began to focus on Guatemala and southern Mexico. We had set aside two weeks for this trip so decided it was in our best interest to limit ourselves to just one destination. There is only so much you can see in two weeks, anyways! Flights to Guatemala were quite cheap which made our decision easier.


Guatemala is a diverse country with an interesting history and varied flora and fauna. At one time the land which is now Guatemala formed the core of the Mayan civilization, prior to the Spanish conquests in the 1500s. Mayan culture is still very prominent in Guatemala, partially due to the high percentage of people who identify as Maya (around 41% of Guatemalans) or mestizo (around 41.5%).   Guatemala is the most populated country in Central America with over 16 million inhabitants, and the country has experienced a significant amount of development and deforestation in recent years.  That being said, there are still some amazing natural areas remaining in Guatemala, from the vast lowland forests in the north, to the high elevation pine and oak forests in the central and southern mountains. Most of Guatemala is mountainous, other than the Pacific coast and the northern lowlands. These mountains create a number of ecological niches due to altitudinal gradients and the ensuing changes in moisture and temperature. Shared with southern Mexico; many of the species found in the Guatemalan highlands are restricted in range to southern Mexico and Guatemala. These include some of the most sought after birds in Central America: Horned Guan and Pink-headed Warbler topping the list.


Dan and I decided that we would rent a vehicle for the first nine days of our trip, and complete a big loop that started and finished at Guatemala City. From there we would take a short domestic flight to the town of Flores, located in the humid lowlands of Guatemala. Flores is very close to the famous archaeological sites of Tikal and Uaxactún, which are surrounded by primary forest and a high diversity of species. The first nine days or so would be very busy with a lot of ground to cover, but the final four days in the Tikal area would be a nice change of pace and a relaxing way to finish off the trip.

Below is a map showing our route. The green loop represents the nine-day circuit we completed with the rental truck, the red line denotes our domestic flight from Guatemala to Flores, and the north green line represents our route via rental car from Flores to Tikal and Uaxactún. 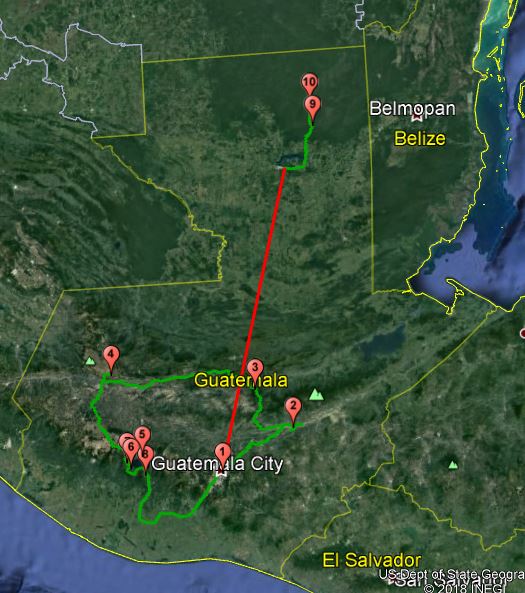 Lago de Atitlán, located in the middle of points #5-8 on the map, is one of the main birding hotspots in Guatemala due to the nice range of habitats and species found in the lake's immediate vicinity. We explored several locales near Lago de Atitlán including Reserva Natural Atitlán, Volcán San Pedro and Los Tarrales Nature Reserve, however there were several other locations that we were able to visit by completing a big loop with the rental truck. These included the dry thorn forest of the Motagua Valley (#2), the humid mountains south of Coban (#3), and the high-elevation oak and pine forest north of Huehuetenango, home to Goldman's Warbler (#4). We only spent one night at each at these locations and six nights around Lago de Atitlán. In hindsight, it would have been nice to have the extra time so we could spend two nights at each of the first three locations we visited. We were a little rushed and ended up missing a few species due to inclement weather, logistical mishaps, or lack of time. But I do not think I would be willing to take away any days from our time near Lago de Atitlán. A three week trip would have been perfect, and also could have afforded the opportunity for a more leisurely pace at the start of the trip, while also visiting a new area or two. 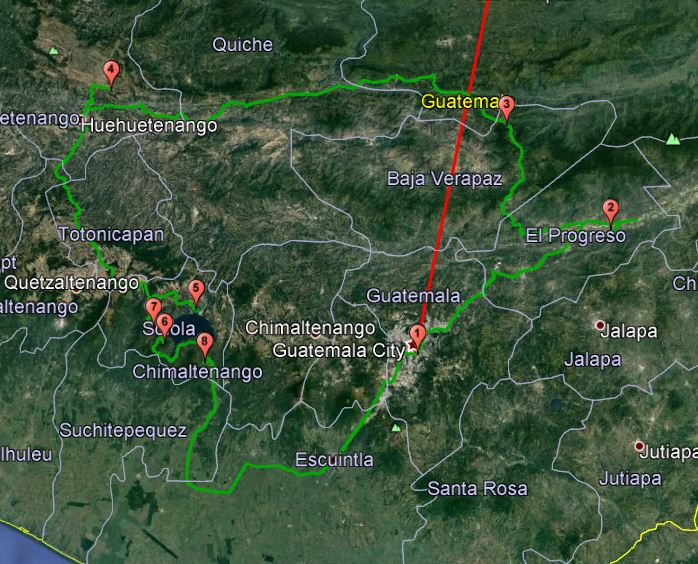 A quick word on travel in Guatemala. Most birders who visit Guatemala do it one of several ways. The most popular (though most expensive) is to organize everything through one of the tour operators. There are several companies in Guatemala that would be happy to sort out your lodging, transport and guides, though of course you will pay a premium for this service. On the other end of the spectrum is the option to do everything independently, stay in hostels, and travel via bus throughout the country. There are a number of areas that are popular on the "tourist trail". These include Lago de Atitlán and surrounding areas, the Antigua area, and of course, Tikal. It is relatively easy to organize everything if you stick to the popular areas, as there is already significant backpacker infrastructure in place.

We elected to choose a third option - that is, renting a private vehicle and exploring on our own. While the cost was a little bit more expensive than if we had elected to take public transport, the freedom offered by having our own vehicle more than made it worth our while. Additionally, the cost of the rental truck (including our gas) was not too bad, working out to less than 40$ per person per day. We were also able to visit a larger number of areas in a shorter amount of time without having the delays caused by waiting on public transportation. Additionally, the first three nights of our trip would have been very difficult to organize (and taken an extra day or two to complete), since we were way off the beaten tourist track.

We also saved money on the trip by neglecting to hire guides for any portion of it. Dan and I have a fair bit of familiarity with traveling and birding throughout the Neotropics and we both enjoy the challenge of finding everything on our own, so we did not hire guides which also helped to keep the costs down. At Los Tarrales where we stayed for three nights, we were informed that in general, guests have to be with a guide to explore the full trail system. However, the lodge manager made an exception for us and let us explore at will.
Overall we did quite well on our own, finishing with 356 bird species, including most of our main targets. If we had had a guide, we probably would have seen Goldman's Warbler in the Huehuetenango area, a bird that was probably our biggest miss from the trip.


For those who wish to do a similar trip to us (that is, renting a private car and exploring independently), a few words of caution. Driving in Guatemala is certainly not for the faint of heart. Many of the roads are impassible without a high-clearance, 4WD vehicle. Other drivers are a little bit crazy as well - timidness is not a characteristic of Guatemalan drivers! Fortunately we were in a big truck so other drivers often yielded to us, especially if I drove with a bit more assertiveness than what is necessary back home. When traveling between towns, often the road will continue as the main thoroughfare through the downtown area. Navigating these stretches are often chaotic between the other drivers, motorbikes, and numerous pedestrians. On several occasions I had to squeeze the truck through a narrow gap with only a few inches on either side in a crowed downtown street. Speed bumps are spaced every 100 m or so throughout each and every one of the towns, and many of them were quite prominent as well. Most rental vehicles in Guatemala are manual transmission, so driving stick is an essential skill.

Additionally, some areas in Guatemala are not safe to explore on your own and we were warned of a few sketchy roads to avoid, for fear of being ambushed and robbed. While the likelihood of this happening is still relatively small, be sure to exercise caution when planning your route. We ended up driving one of the more dangerous roads at one point, though we only found that out after the fact. That being said, I would think that the odds of being targeted would be much higher if you were being transported in a tourist van, as opposed to driving a pickup truck (with heavily tinted windows). We experienced no issues during our trip, and everywhere we went the people were friendly. Perhaps we were just lucky, and it is hard to say with us only having spent two weeks in the country - obviously our experience provided just a brief snapshot of what Guatemala is like. But we had a great experience traveling independently in Guatemala.


As I mentioned before, Dan and I have very similar interests when it comes to travel. If I had to break it down, I would say that my interest is approximately 50% birds, 25% herps, and the remaining 25% split between mammals and invertebrates, especially butterflies and moths. Dan's interests are similar enough with perhaps a little tweaking of the numbers. Our trip was primarily driven by which birds we wanted to see, while also visiting areas that gave us a good chance to see a variety of herp species. Everything else would be "by-catch" while we were on our bird or herp quests. This strategy worked out very well. We were able to see more birds than we had estimated, only missing a few targets. Our herp list was quite solid considering we did not target species too much. And we encountered many other species of our tertiary targets (mammals, invertebrates, etc). Add in the amazing scenery and excellent food, and it was a pretty successful trip!