The afternoon on January 21 was eaten up by the long drive south to Lago de Atitlán, traveling through mountains and passing by countryside. Around 5:00 PM we passed through the town of Sololá, stocked up on beer, and completed the drive down the hill towards the lake. Surrounded by volcanoes, the lake is situated in a massive caldera formed by a volcanic eruption many years ago.

Earlier that day we had booked a room at Hotel San Buenaventura de Atitlán. Only a few minutes walk from the hotel was the entrance gate to Reserva Natural Atitlán, a place that we were planning on exploring the following morning. The hotel was located right on the shores of Lago de Atitlán, which provided an incredible backdrop with several volcanoes looming over the landscape. The cost of a room at Hotel San Buenaventura was a bit more compared to if we had stayed in the nearby town of Panajachel, but the peace and serenity made up for it, as did the fact that the reserve was only a three-minute walk away.

We poked around the hotel for half an hour before dark, finding two new birds for me - Rufous Sabrewing and Yellow-winged Tanager - both of which Dan had seen before, as well as a number of trip birds (Acorn Woodpecker, Peregrine Falcon, American Coot, etc). The only nearby restaurant was in a neighbouring hotel, so we walked over in the dark to Atitlán Hotel to eat the extremely overpriced meal. Then it was back to our hotel and by 9:00 PM we were in bed.

Now that our big loop of driving was mostly completed, the remainder of the trip would be at a more relaxed pace. We had planned for a single night near Reserva Natural Atitlán, two nights at the south end of the lake, and thee nights at Los Tarrales Natural Reserve, followed by four nights in the north at Tikal. The main reason that we wished to spend a night at Reserva Natural Atitlán was the presence of one particular hummingbird species, the woodstar-like Sparkling-tailed Hummingbird, which was seemingly more reliable at this end of the lake.

Before dawn, we were up to begin the day's exploring. A check of Reserva Natural Atitlán confirmed that the gate was closed and would only open at 8:00 AM. That was a little frustrating, but at least the road passed through nice dry forest habitat and given the abundance of flowering trees, we thought that we had a chance for the Sparkling-tailed Hummingbird.


The morning started well with great views at a pair of White-faced Ground Sparrows.Only a few minutes later we caught sight of a tiny, long-tailed hummingbird zoom into the top of a flowering tree that was being feasted on by Baltimore Orioles and Tennessee Warblers. It was a Sparkling-tailed!


We poked around for another hour and a half while we waited for the gate to open. Fortunately the roadside birding was quite good and our day list hit 50 species relatively early on. A Blue-and-white Mockingbird furtively crept around a roadside bush, a Greater Pewee perched on a dead snag, while a Rivoli's Hummingbird and Morelet's Seedeater were discovered in the garden of the hotel. Each of these species was new for me, but Dan had seem them all elsewhere, except for Blue-and-white Mockingbird.

. I even took a photo of one of the ubiquitous Great-tailed Grackles!


Several fence lizards (Sceloporus sp.) were basking on trees by the shore of Lago de Atitlán, now that the sun had crept above the rim of the caldera and was quickly warming the landscape.


At 8:00 AM sharp we found ourselves back at the entrance gate to Reserva Natural Atitlán. This time it was open, so we quickly paid the entrance fee and hit the trails. Much of the landscape consisted of dry, deciduous forest with a high proportion of oak (Quercus sp.). Dan and I walked a big loop, climbing up into the hills and back down again.


Despite the best hours of the morning being behind us, we did quite well with a number of new bird sightings. One of our most wanted birds of the trip was Blue-throated Motmot, an odd-looking species with a limited range in the highlands of southern Mexico, Guatemala and Honduras. Dan made a great find when he picked one out sitting quietly at the side of a ravine. Unfortunately, it was a little distant for good photos.

The warm, late-morning sun seemed to power up a number of butterfly species, several of which we photographed. One of the big attractions at Reserva Natural Atitlán is the butterfly garden located inside a building. I'm not sure why you would spent time inside seeing butterflies when you could walk the trail and see so much else, as well as a nice selection of butterflies. To each their own, I guess.


One last surprise was in store for us - a chipping MacGillivray's Warbler near the entrance that came in with a bit of playback. We had seen several on the previous day, high in the mountains, but this was a much better view. Photos though, not so much! The MacGillivray's Warbler was the 76th species on the morning's eBird checklist - not a bad haul.


As you could tell by now, today was not a great "photography day". Most species remained just too far away, making anything more than just a record shot impossible, and extended photoshoots with any species did not happen. But we would make up for that later in the trip, especially at Los Tarrales and Tikal.

We checked out of the hotel before noon and hit the road. Our route would take us from the Panajachel area back out of the caldera, and around the west side of the lake to San Pedro La Laguna, located halfway between #6 and #7 on the maps, below. 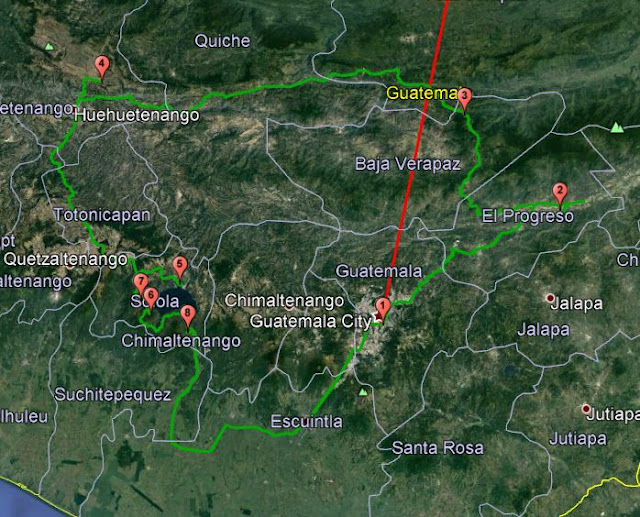 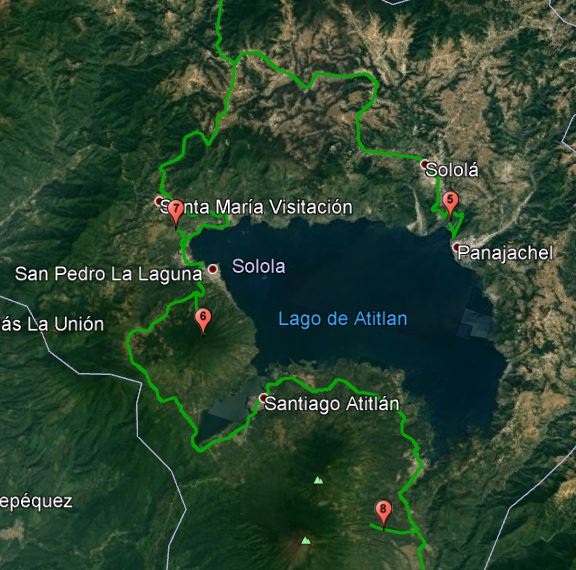 We made good time on the drive and arrived in the San Pedro La Laguna area by 2 PM or so. On the drive Dan searched for accommodations online and we settled on one, called Ecohotel Uxlabil. Located right on the shores of Lago de Atitlán, Ecohotel Uxlabil is located just out of town and down a steep hillside, adding to the feeling of seclusion. Right from the balcony, however, is an incredible view of the south end of Lago de Atitlán. The prominent hill across the lake is known as as Cerro Rostra de Maya, loosely translated to Indian Nose Hill. That location would be our best shot of the trip for Belted Flycatcher and we planned to hike up it in a couple of days time.


Dan and I decided that we would relax for the rest of the afternoon since it had been a few busy days up to that point, and we had an arduous hike planned for the next day. It just so happened that our room was on the top floor of the Ecohotel, with the balcony providing excellent panoramic views of not only the lake, but a number of  trees that were growing near the base of the Ecohotel. It was the perfect location for a "Big Sit".


A Big Sit, for those wondering, is an attempt by birders to see as many bird species as possible over a certain time period (whether it be an hour, an afternoon, a 24-hour period, etc), from a certain location. During a Big Day attempt you can travel around to search for birds, but during a Big Sit, you are confined to one small area. As our eBird checklist grew to 20 species and then to 30 species, we decided that this would be a good a time as any to see how high we could get the list!

On the lake were a number of waterbirds - Pied-billed Grebe, American Coot, Lesser Scaup, Common Gallinule, while various wading birds and even an Osprey perched near the shoreline.


As the afternoon wore on and evening approached, we began to notice an uptick in the local movement of birds along the lakeshore, whether it was a Red-billed Pigeon returning from a feeding area, several Orchard Orioles moving through in the trees below us, or massive flocks of grackles heading to the reed beds to roost. The trees around the Ecohotel often were loaded down with birds whenever a local flock passed by, and we ticked new species like Magnolia Warbler, Painted Bunting, Red-legged Honeycreeper and Grayish Saltator this way. Even a male Sparkling-tailed Hummingbird showed up and perched for a few minutes!


Some non-birds were noted too, such as this basking Green Iguana at the edge of the lake.

An hour prior to dusk, Dan and I decided we would go for a short walk around the shoreline near the Ecohotel to try to pad our list. Three hours on the balcony had produced 51 species! In the photo below, the Ecohotel is the green building on the right.

In the last hour of daylight we added fifteen more species, including our first ever Rusty Sparrow. I even took my first decent-ish photo of a Rufous-collared Sparrow. This species is abundant in much of Central and South America and easy to overlook, but they are quite attractive.


We went to bed at a reasonable time since the following morning would be an early start. Our plan was to climb Volcán San Pedro, where on its highest slopes, Horned Guans still roamed.